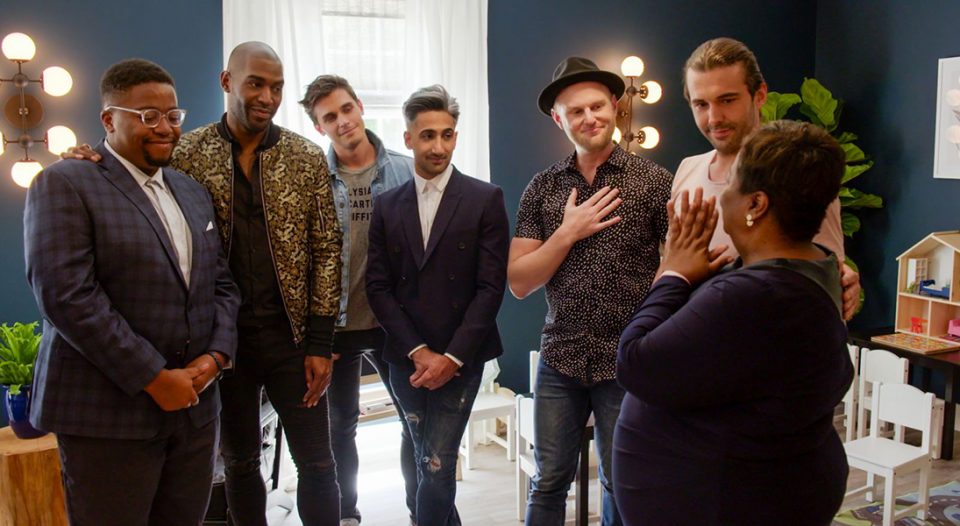 The first episode of the new season of Netflix's Queer Eye explores church and reconciliation, among other topics.

I didn’t initially pay much attention when Queer Eye, Netflix’s reboot of the early-2000s Bravo reality series Queer Eye for the Straight Guy, started streaming earlier this year. I hadn’t watched the original, and I didn’t think I’d be interested. But then I started seeing posts about it all over social media, from such a wide variety of people. They said that it was moving, that it made them cry. They said it renewed their faith in humanity.

The first season took viewers into the heart of the South, where the “Fab Five” hosts worked with a set of pretty unlikely men, teaching them how to make guacamole, suggesting better-fitting clothes, giving their hair a trim and redecorating their spaces. But there was more to it than that. Unlike a traditional makeover, this new iteration of the show also managed to probe some of the reasons why people were stuck and help them move past those things holding them back. It wasn’t uncommon for everyone to be in tears by the end of an episode or for the subjects to cling to the Fab Five like old friends, even though they’d only met them days earlier.

My friends were right. I was moved. I did cry, and it did restore my faith in humanity.

When season two was released last month, I was ready. I’d invited over a friend I’d brought into the Queer Eye fold and we loaded it up.

Right away, it was clear that episode one of season two (“God Bless Gay”) was going to be a bit different. Instead of a man in desperate need of fashion help, the Fab Five were driving to the town of Gay, Ga., to help a woman named Tammye bring her church community center, 50 years in the making, to fruition. As they drive, a choral version of “Amazing Grace” begins to play on the soundtrack.

As it turns out, there’s more going on than just the community center. Tammye’s son Myles has recently moved home after a long absence. He’s gay, and he’s had a hard time feeling accepted in his church and community since he came out. The upcoming weekend is Homecoming, an annual event intended to remind people who haven’t been to church for a while that they can come back, that they are welcome and loved. Myles is nervous but thinking about going.

In the middle of the episode, tears in my eyes, I turned to my friend and said: “This is church.”

Tammye, who immediately asks the Fab Five to call her “Mama,” is very focused on others. She’s an usher in her church, hugging everyone who comes in the door; she’s a teacher and a volunteer. Even so, she initially had a hard time accepting Myles’ sexuality. The way he tells it, it took a brush with cancer to give her time to reflect. In a particularly moving moment, she talks about apologizing to him for not loving him unconditionally.

But it’s not just the show’s subjects who are having feelings. Bobby, who handles design, comes face-to-face with his own roots. He also grew up in the South in a religious home. “There wasn’t a day I wasn’t at church,” he tells Tammye through tears. “Those people were my family.” After he came out, they rejected him. “I told myself I’d never go back to a church,” he said. Later, Tammye looks right at Bobby and says this: “Come home, you’re God’s son.”

Throughout the episode, everyone is crying, quoting Scripture and hugging. There is kindness and respect and joy. There are tough conversations. In the middle of the episode, tears in my eyes, I turned to my friend and said: “This is church.”

When Tammye finally sees her vision of the community center come to life, she turns to the Fab Five, calling them God’s provision. Not an eye is dry as she goes to each of them and connects personally, pouring out love, communicating to them that they are seen.

There are moments in my walk with the church that I become jaded. Sometimes I think reconciliation is just a nice word we toss around to look relevant. But here, in a very unexpected place, I watched it in action. This episode reminded me that God is not limited by humanity. God is a lot bigger than many of us think. If you could use that reminder, I recommend you give this episode a watch.

Every day different: Why our bodies matter