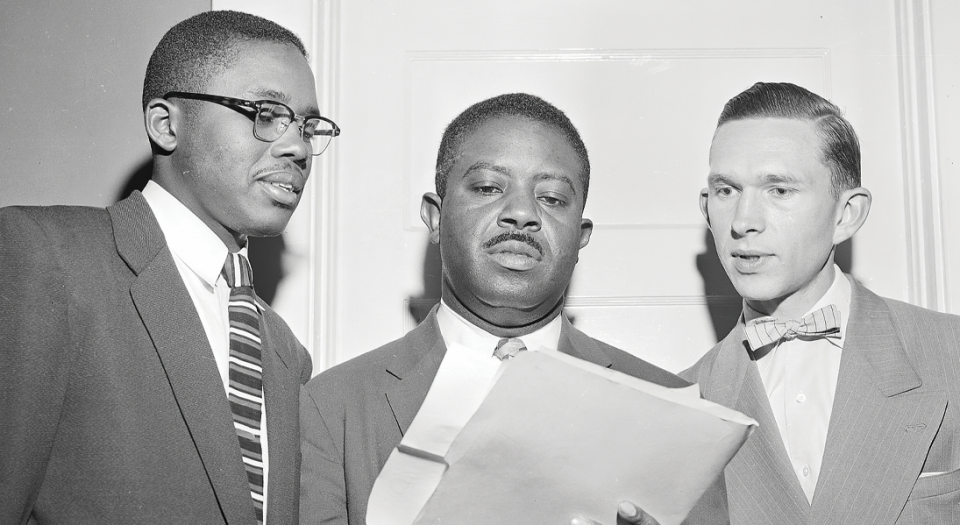 Ralph Abernathy (center) speaks with attorney Fred Gray (left) and Robert Graetz about the bus boycott settlement in Montgomery, Ala., on Feb. 21, 1956. Reprinted with permission from Crusader Without Violence: The First Biography of Martin Luther King, Jr. by L.D. Reddick (NewSouth Books, 2018).

Among the white ministers of Montgomery, Ala., Robert Graetz was nearly alone in supporting the legendary 1955 bus boycott that would integrate the city’s public transit system.

Now 92 and receiving hospice care for Parkinson’s disease, Graetz was unable to comment for this story. But his wife, Jean, 90, traces their civil rights activism to the “Beloved Community,” a global vision of love, justice and equal opportunity popularized by their friend Martin Luther King Jr.

“There is no such thing as race,” she said. “Scientists know this—we all have the same DNA, we’re all brothers and sisters, and we need to act like this is true.”

Jean, a farm girl from northwestern Pennsylvania, met Robert, a native of Clarksburg, W.Va., in 1949, when they were studying at Capital University in Columbus, Ohio. They married two years later.

At Capital, Robert began researching anti-Semitism and, in the course of his work, learned about the suffering of Black people, especially in the South. “The Lord spoke to him,” Jean said. “He got the message that this is what he was supposed to do with his life. He started a race relations club at the university and joined the NAACP.”

In 1955, Robert was ordained by the American Lutheran Church, a predecessor of the ELCA. That year the couple moved to Montgomery for his first full-time assignment, at the all-Black Trinity Evangelical Lutheran Church. At the time, Jean said, Black people’s access to schooling was so limited that finding a person of African descent who could meet the educational requirements to be a Lutheran pastor was difficult.

Working for the Beloved Community

In Alabama the Graetzes became friendly with Rosa Parks, a neighbor whose NAACP youth council met at Trinity, and joined the Montgomery Council on Human Relations, where they met King.

On Dec. 1, 1955, Parks was arrested and fined for refusing to yield her seat on a city bus to a European-descent man. Four days later, roughly 40,000 bus riders of African descent—the majority of the transit system’s customers—embarked on a yearlong boycott, now widely regarded as the earliest mass civil rights protest in the United States.

Managing the boycott was the Montgomery Improvement Association, chaired by King and guided by an executive committee with one European-descent member: Robert Graetz.

The Ku Klux Klan bombed the Graetzes’ home in summer 1956, while the family was out of town, and again in 1957, when the couple were at home with their 9-day-old son, David. Still the Graetzes forged on, refusing to “accept the hate that the Klan had for us,” as Jean said.

In 1958, Robert received a call to become pastor of St. Philip Lutheran Church back in Columbus. His first inclination was to decline, but by then Trinity was considering a transfer to another synod that was less tolerant of pastors actively engaged  in political causes. So he accepted the call, and the Graetzes moved north—but not out of the civil rights arena.

“The Lord spoke to him. He got the message that this is what he was supposed to do with his life.”

“It’s not just about Black and white,” Jean said. “Lots of other people don’t have the rights and privileges of the Constitution and the Bible. We didn’t stop after the bus boycott.” The couple embraced women’s rights as an issue and later advocated for the LGBTQ community.

Robert’s book A White Preacher’s Memoir: The Montgomery Bus Boycott was published in 1999 by Black Belt Press. Six years later, the Graetzes returned to Montgomery when Alabama State University invited them to participate in a yearlong commemoration of the bus boycott’s 50th anniversary.

Having long planned to retire in Alabama, the couple stayed in Montgomery after the celebration concluded, and Graetz’s second book, A White Preacher’s Message on Race and Reconciliation, was published in 2006 (Newsouth Books). They’re still actively involved in the university’s National Center for the Study of Civil Rights and African-American Culture.

The Graetzes have seven children, ranging in age from 50s to 60s. “We have a diverse family,” Jean said. “We have 26 grandkids. Half of them look like us and half are Chinese [American] or African American, kind of all over. Our kids married into Jewish families, Muslim, many flavors of Christianity. We’ve got 17 great-grandkids and one great-great-grandkid, and all of us are working for the Beloved Community.”