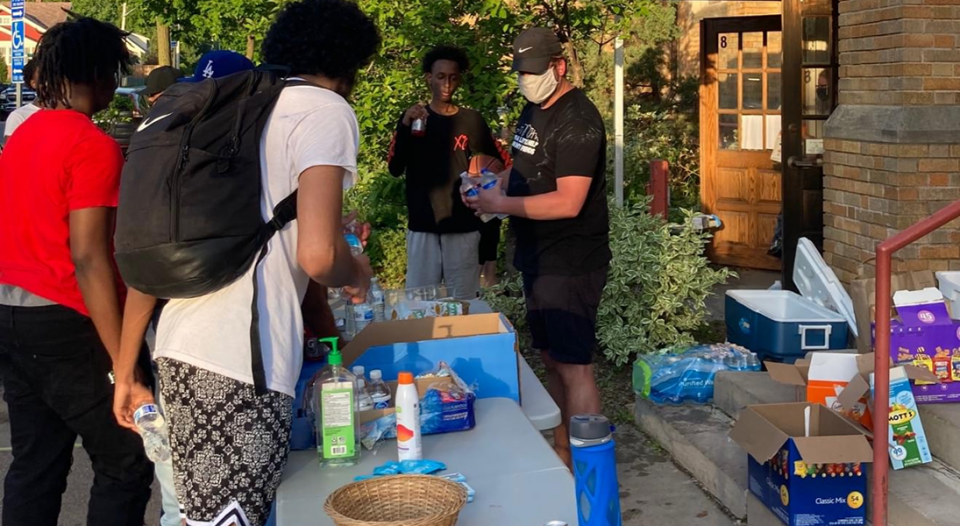 Calvary Lutheran, Minneapolis, set up a community table outside the church building to offer supplies to people on their way to protests or to visit the memorial for George Floyd.

Two Minneapolis congregations, Calvary Lutheran and Holy Trinity Lutheran, were in the epicenter of protests and social unrest that followed the killing of George Floyd by police on May 25. The two congregations—only about 3 miles apart—met the situation by showing up for their community, serving their neighbors and calling for justice.

“We are one block south of where George Floyd was murdered by police,” said Hans Lee, pastor of Calvary. “We knew that there would be an outcry following the murder and began preparing immediately to respond in a way that we hoped would support those experiencing rage and grief.”

Calvary set up a community table outside the church building to offer first aid to people during the initial protest on May 26 and has since been providing food, drinks, masks, hand sanitizer, parking and a sign-making station for people on their way to protests or to visit the memorial for Floyd.

Calvary also operates a food shelf that Lee said had already increased its output since the beginning of the COVID-19 pandemic and has ramped up even more in the weeks following Floyd’s death.

Lee said Calvary, which was featured in Living Lutheran’s January 2020 lead feature “Unpacking white privilege,” has been “working on dismantling white supremacy for quite some time” and that, in many ways, Calvary was ready for this moment.

“The work we do is twofold—to look inward as a congregation on how we are complicit in white supremacy and to walk alongside, and be led by, leaders of color in the larger work, like is happening now,” Lee said. “Sometimes it is through tragedy that a faith community gains more clarity about its mission; this is such a moment for Calvary.”

Felecia Boone, a longtime member of Calvary and vice president of the Minneapolis Area Synod, agreed with Lee: “I think people are energized in a way they hadn’t been before, and I think people who were weary or tired of having this conversation around race on a regular basis now understand why we were doing what we were doing.

“It’s a matter of doing work together—shoulder to shoulder—and also doing that self-work to be aware and understand where bias comes from, how you can mitigate that and understand when it’s happening, and then move it out of the way so we can move forward toward the beloved community people say they want. It’s time to live our values and not just talk about our values.”

Lee said the congregation’s hope and prayer is that this will be a turning point for the country. “It seems like people are listening in a new way, but no one engaged in this work expects it to be easy,” he said.

“This is going to be a really long ride to get to justice and equity because it took many, many years to build up the systems of inequity and injustice,” Boone said. “Get your rest, fill your cup—it’s going to be a long one. I think we can do it; we’ve been primed to do it.”

Ingrid Rasmussen, a pastor of Holy Trinity, said that after social unrest arose in the area following Floyd’s killing, she got a call late one evening from a neighborhood organization partner asking if Holy Trinity would consider offering its church as a medic station site for protesters.

Rasmussen said the congregation served that role for a couple of days and nights, primarily responding to protesters who suffered tear gas exposure and other forms of trauma on the streets.

After a few days, the medic station had to be relocated to a different church down the street after the nearby 3rd Precinct police station was burned and the congregation was warned of a possible gas explosion.

“After our medic responsibilities were done and the situation in the neighborhood changed dramatically, we looked around and realized that all of the grocery stores and basic necessity stores were burned and no longer operable,” Rasmussen said. “We went from being a food-rich community to a food desert overnight. We’ve been operating as a food distribution center since then.”

Thousands of donations, volunteers and users of the distribution site have come to the congregation.

Angela !Khabeb, a pastor of Holy Trinity, said the needs have been shifting weekly and the congregation is exploring all of its options, in addition to raising $100,000 to help provide direct care for people in the community.

With all of the generosity that has poured into Holy Trinity, !Khabeb thinks there can be a larger takeaway. “One thing that I hope will happen is that people will begin to embrace the theology of abundance and to release the need to police black bodies,” she said. “We’re not giving them this food; we’re sharing the abundance that God has already blessed this congregation with. … And I think that [theology of abundance] can go a long way to dismantling white supremacy.”

Similar to Calvary, !Khabeb said the congregation was ready for this moment of response. “Holy Trinity has a reputation in the Longfellow community and the nation, and even globally, as being a congregation that is cheerfully progressive, and we seek justice in all things,” she said. “We’re working on racial equity, namely, and dismantling white supremacy in our congregation. … [We] were already poised to be on the front edge of fighting injustices in our society.”

!Khabeb said Holy Trinity is one of few buildings left standing in the neighborhood after the social unrest, and that “these burned-out buildings are really just a metaphor for some of the hearts of black people and what we’ve been through and go through daily. They look demolished on some days.”

Rasmussen shared a similar message with the congregation about the destruction being a symptom of inequality.

“When we start to focus on physical destruction, we start to lose sight of the fact that it arises out of generations of inequality and it is sparked by the brutal murder in broad daylight of a black man who couldn’t have even been jailed for the offense people are accusing him of,” she said. “Our want is not to return to normal, because normal was inequitable. Our want is to build a new reality together moving forward.”

ELCA presiding bishop issues statement, “This is the Day”