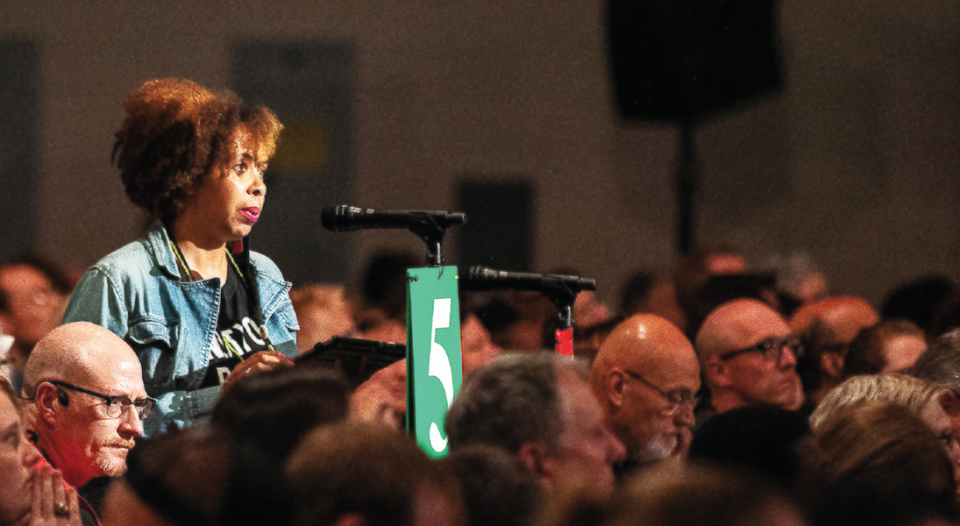 Author Kwame Pitts addressed the importance of remembering the Emanuel 9 on the plenary floor at the 2019 ELCA Churchwide Assembly.

Series editor’s note: Throughout 2020, “Deeper understandings” will engage the ELCA’s commitment to authentic diversity. The Emanuel 9 are the nine people of African descent who were shot and killed by a white supremacist at Emanuel African Methodist Episcopal Church in Charleston, S.C., on June 17, 2015. The 2019 ELCA Churchwide Assembly adopted a resolution to commemorate June 17 as a day of repentance in the ELCA for the martyrdom of the Emanuel 9.
—Kathryn A. Kleinhans, dean of Trinity Lutheran Seminary at Capital University, Columbus, Ohio

Last summer, I found myself on the plenary floor at the 2019 ELCA Churchwide Assembly, addressing the importance of remembering the Emanuel 9 and why we, as a denomination, had to do something physical and tangible, instead of an abstract statement that would fall into the virtual dust, buried on a website.

It was important because racism drove a man—a member of an ELCA congregation—to walk boldly into a church, sit down for a whole hour and share Bible study before he stood up and said they all needed to die because African Americans were a threat to American Christianity and U.S. society overall.

This violent catalyst would force the ELCA to face the fact that our church has not been historically welcoming to people of the African diaspora, much less anyone who was not cisgendered and white. As a denomination, we can no longer sweep under the rug our culpability and role in allowing the empire to seep into our church communities until there are no safe, authentic spaces for anyone who does not match the status quo.

As debate began on the Emanuel 9 resolution, a question was raised about the word “veneration.” Initially, I experienced this as a knee-jerk reaction to a word that many Lutherans may not be aware of or may identify as something more “Catholic.” But it was also a moment of education for those who are not of the African diaspora to understand why we feel a need to include veneration and the rite of libations—a moment when we invite not only the Creator and the Spirit but also those saints, those ancestors, into sacred space as we remember them—in our worship contexts as something most holy and very spiritual.

The exploration of how rituals function both in worship and in communal settings outside of a physical building is part of the work that emboldens me as a womanist practical theologian. The need for resources to deal with both historical and generational trauma due to racism, oppression and marginalization is critical in this reality of the Black Lives Matter movement, which encompasses the political, social and economic dimensions of society. The decentralization of worship from only one way or style or dogma shifts the atmosphere in a way that we should welcome if we are committed to being in community, regardless of how that evolves.

If the church is supposed to be an oasis from the chaos, the confusion and the convolutedness of the world, then how do we counteract the terror?

Ritual action is important to the ethos of black lives in America. As James H. Cone expressed in The Cross and the Lynching Tree (Orbis Books, 2011), it was in the black church that African Americans have felt authentically and unabashedly whole and emancipated; where they knew that God loved them. They were aware that there were places in the Scriptures where Jesus stated that he stood with those oppressed, marginalized and violated by the known (empire) and the unknown (religious leaders).

That is what the word “veneration” encompasses. From the viewpoint of the African diaspora, venerating our ancestors is important for two reasons. First, we continue to uplift the stories of struggle and of celebration that our elders have gone through and the lessons that can be learned from them. Second, we continue the work of liberation and of equality that our elders had been involved in in many ways, whether intimately or collectively and publicly. Veneration means that we affirm their humanity and legacy, that they were important to the ethos of the wider society and that they mattered.

Spiritual Care in the Age of #BlackLivesMatter (Cascade Books, 2019) quotes Phillip Atiba Goff, president of the Center for Policing Equity: “The perception that the perpetrators of violence face no consequences for their actions can transform trauma into terror. If you are conditioned to a trauma, and that trauma occurs and recurs in a context where it feels you have no control over it,” that’s when trauma becomes terror.

If the church is supposed to be an oasis from the chaos, the confusion and the convolutedness of the world, then how do we counteract the terror? What happens when that terror happens within our own walls—to our siblings in Christ and in faith? How do we honor their lives when the unthinkable happens, when one of our own defiles someone else’s life and uses God’s name in the same breath?

How do we honor them?

Veneration uplifts them as beloved saints and ancestors in light, recognizing that the Emanuel 9, without hesitation, welcomed whomever into the doors of their sacred space because that is what the Creator called them to do.

We, in the same vein, should without hesitation uplift and venerate them because that is what the Creator calls us to do.

We are to be bold