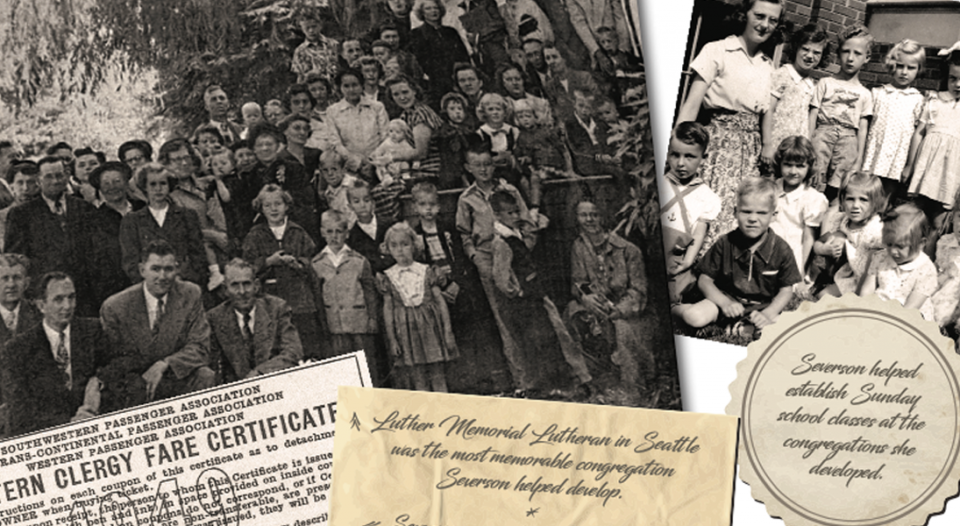 One frosty morning in March 1946, Bernice Severson (née Johnson) arose early. She dressed from the one suitcase that held her entire wardrobe plus hundreds of evangelism leaflets. She ended her morning devotions with Moses’ prayer in Exodus 33:13: “Show me your ways, so that I may know you and find favor in your sight.”

Severson, now 96, was one of 18 young, single women who received letters of call to be domestic missionaries for the Augustana Lutheran Synod, a Swedish predecessor of the Lutheran Church in America and ELCA.

“Before World War II,” she said, “women were limited by the church to professional work as a parish secretary or musician, or they served as deaconesses in nursing, administration or teaching.”

Only when men entered the military in World War II did mission directors visit Lutheran colleges and recruit women to survey people in growing residential neighborhoods to assess the potential for new congregations.

“I suppose we were the ‘Rosie the Riveters’ of Lutheran mission development,” Severson joked. “We had ‘clergy passes’ from railroad companies for transportation. I journeyed through my territories on the wings of a train and a prayer.”

While attending college, Severson thought about how she could serve God and expected to be a teacher. But a favorite piece of Scripture called to her: “So if anyone is in Christ, there is a new creation: everything old has passed away; see, everything has become new! … So we are ambassadors for Christ, since God is making his appeal through us; we entreat you on behalf of Christ, be reconciled to God” (2 Corinthians 5:17, 20).

“I believed God was asking me to be Christ’s ambassador,” she said.

Each of these domestic missionaries, also known as survey workers, explored a mission field alone for one week and then moved on to another location. Every year the 18 women surveyed mission fields in all 48 states and the territories of Alaska and Hawaii, plus Mexico and Canada.

Domestic missionaries made repeated visits to mission fields until a sufficient number of households had committed to starting a congregation.

The women also served declining congregations, researching a community’s priorities and assisting the congregation and pastor in adapting their ministries to the needs of their neighborhoods.

In the ELCA today, most mission developers or redevelopers are clergy. They receive extensive post-seminary training and professional education in mission development. The women missionaries of the 1940s and ’50s had similar responsibilities but weren’t ordained or trained in organizing worship communities.

“I believed God was asking me to be Christ’s ambassador.”

From March 1946 to June 1951, Severson traversed eight states to survey 54 neighborhoods. She visited up to 80 homes and apartments a day, five days a week. Her missionary work resulted in more new mission congregations than she can count.

“Visiting homes opened doors to a cross-section of Americans,” she said. “It acquainted me with fascinating and varied people.”

On her calls, Severson said, she felt “the glowing, sacred sense of God’s presence as I shared Christ’s invitation for people to unite with God through the church.”

Severson was responsible for developing congregations in Chicago’s Oriole Park neighborhood (1946) and in Nampa, Idaho (1947), among others. She also served as a mission redeveloper for Faith Lutheran Church in Springfield, Ill., and a congregation in La Grange, Ill.

Her most memorable experience as a missionary was developing Luther Memorial Lutheran Church in Seattle. She surveyed the city’s Broadview neighborhood for a new church and worked with a sponsoring congregation to organize and develop the new mission.

The opening day of Sunday school attracted 39 children, 10 adults and five teachers, an unusually large number of people for a new church. The news was reported not only in Seattle but also in California’s Sacramento Bee, on Jan. 23, 1948, though at that time publications credited pastors with developing congregations, not the women who actually started them.

Once settled in a new mission area, a domestic missionary became a “parish worker,” assuming every responsibility of a pastor except presiding over worship and sacraments, which fell to a minister from a local congregation.

In addition to pastoral, teaching and missionary responsibilities, a parish worker served as the church secretary, custodian, volunteerism coordinator and liaison to the mission board. They recruited church musicians and teachers, established the Sunday school, provided the curriculum, and led adult classes, prayer groups and Bible studies.

Professional domestic missionaries aren’t mentioned in the official Augustana Ministerium: A Study of the Careers of the 2,504 Pastors of the Augustana Evangelical Lutheran Synod/Church, 1850-1962, but Severson’s extensive documentation of her experience helps tell their story.

These young foremothers of modern-day mission developers often felt lonely and overworked, but they were sustained by faith and supported by caring communities. An entry in Severson’s journal during her missionary years summarizes this sentiment: “I went alone to a strange place and each time God opened the hearts of people in the towns to help me as a person and as a missionary.”