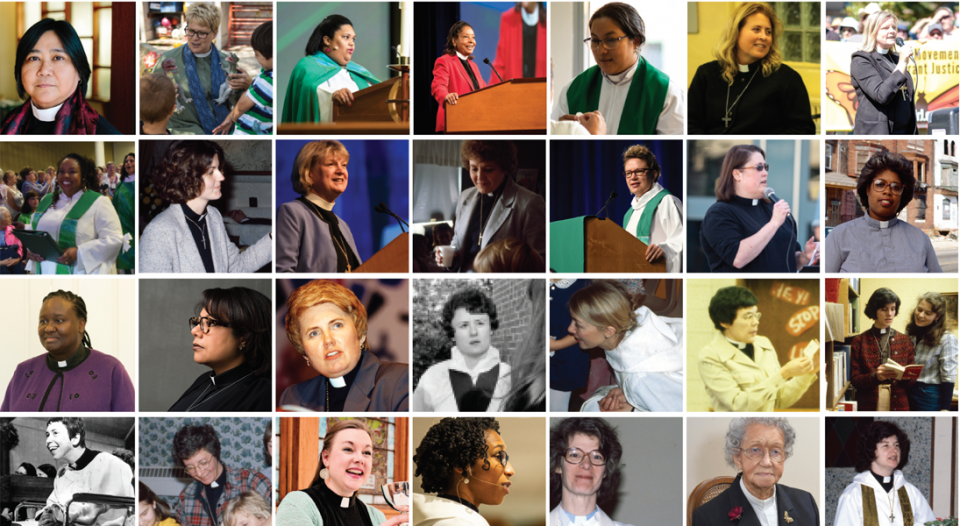 The rostered ministers pictured represent women ordained in the last 50 years, not those who were part of interviews for this study.

In the five years leading up to the 50th anniversary of Lutheran women’s ordination in the United States this year, I interviewed 85 female ELCA pastors serving across the Southeast. (I also spoke with the bishops from the eight synods represented in my study.) My book Holy Mischief: In Honor and Celebration of Women in Ministry (Cascade, 2019) is based on those interviews.

One of the questions I asked these pastors was what they would want the church to know if they could truly be honest. Although they didn’t answer with a single voice, the overwhelming love and grace they have for their congregations was clear. The collective response was: “This is exhausting; it is so hard” and “I am so grateful.”

Many congregations still see female pastors as consolation prizes. One bishop I interviewed said, “Our smaller, rural congregations know a female pastor is all they can afford.” And although, according to ELCA Research and Evaluation, the first-call pay differential between male and female pastors is down to 3% in 2020 (probably because of greater synodical involvement with negotiating these packages), when all rostered ministers are considered, females still make 9% less than their male colleagues.

I asked these pastors what they would want the church to know. The collective response was: “This is exhausting; it is so hard” and “I am so grateful.”

Those interviewed also expressed that women must work harder: It is not enough for a female pastor to be “good”; she has to be “better.” Everything she does, does not do, or is perceived as not doing negatively impacts not merely her but every other female pastor. My research showed that there is a ripple effect faced by women and minority ministers that their white, male colleagues rarely experience.

Almost everyone I spoke with has experienced being the first female pastor many in their congregation and community have ever seen. Several expressed feeling like a museum or zoo exhibit after hearing such things as, “I’ve heard of female pastors, but I’ve never seen one!” Nearly every pastor I interviewed knew people who had left the congregations they served because of their gender, without ever meeting them.

For many, this is one of the most painful parts of ministry. As one pastor said, “It’s impossible not to take it personally. But I also hurt for the community. I don’t want them to be fractured because of me. And at the same time, I believe this is God’s call for me—to be in this place at this time.”

A common theme in these women’s stories is that people don’t know what to call them. They were almost always referred to with a gendered qualifier: “lady pastor,” “female pastor” and even “pastorette.” Many said they were also called “sweetie,” “honey,” “young lady” and “kiddo” by their parishioners and even by male colleagues. They expressed feeling demeaned and demoralized, a reflection of a refusal by those using such language to take seriously God’s call of the person to the office of pastor.

Nearly a quarter of the women I interviewed shared stories of harassment in public spaces, especially hospitals.

Women rostered ministers are routinely subject to comments about their weight, clothing, nails and makeup. They are often assumed to be better at pastoral care and at children’s ministry than public or community leadership. All of this is problematic, but none of it surprised me.

What did surprise me was the amount of harassment and even violence experienced by so many pastors because of their gender. Nearly a quarter of the women I interviewed shared stories of harassment in public spaces, especially hospitals. Many were stopped, sometimes physically, by strangers challenging them because they wore a collar. Of the 85 interviewed, nine shared stories of having experienced threats—and in some cases, actual violence—from within their congregations.

Despite the challenges, the common denominator running through each interview was how much these pastors care. Every woman expressed experiencing their calling as pure grace—an invitation to holy ground. “The sacred work we do, the stuff you know about people’s struggles, you look out from the pulpit and you can’t dwell on that. But then they come up for communion and you give them grace,” one said. Another said, “It is all so beautiful.”

Some women responded that their experiences of God’s grace—and of having received it in church, particularly at the altar—made them want, more than anything, to share this grace with others. “I just know that I receive God’s grace and it matters. It matters in ways big and small, in ways I can’t even begin to express. But it matters to me and it matters to others,” a pastor said.

Because their lives had been irrevocably changed for the better, these pastors continue to yearn to be instruments of that grace. Presiding over the eucharist was, by far, the most mentioned aspect of pastoral ministry that both brought women into their calling and continues to keep them there. “I love presiding at the table,” one pastor said. “It is an honor. A blessing. It is one of the places where I know God shows up.”

And as long as God continues to show up, they do too. Thanks be to God.

Mindy Makant
Mindy Makant, a deacon, is associate professor of religious studies and director of the Living Well Center for Vocation and Purpose at Lenoir-Rhyne University, Hickory, N.C.

A powerful gathering of sisterhood

A fresh look at Katharina