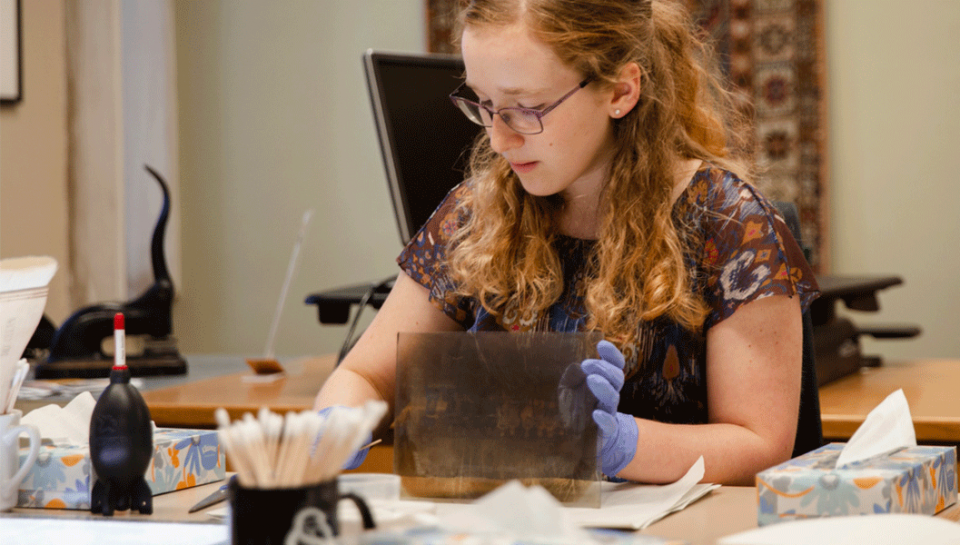 Erin Magoon, a junior at St. Olaf College, Northfield, Minn., studied the 50th anniversary of the ordination of Lutheran women in the U.S. as part of a collaborative research project with religion professor L. DeAne Lagerquist. Working on “50 Years On” has sparked Magoon’s interest in becoming an archivist.

Erin Magoon, a junior at St. Olaf College, Northfield, Minn., said that before May 2019, she knew little about the history of women’s ordination in the Lutheran church.

Determined to change that, she applied to be a student collaborator with L. DeAne Lagerquist, a religion professor at St. Olaf, as part of the school’s Collaborative Undergraduate Research and Inquiry (CURI) program. The impetus for their project was this year’s 50th anniversary of the ordination of Lutheran women in the U.S. Magoon and Lagerquist said their research was eye-opening.

“I soon discovered the strength and resilience demonstrated by female clergy in the past 50 years,” said Magoon, who is pursuing a double major in history and in women’s and gender studies. “I have always been interested in women’s history, and I was especially passionate about this project because I love opportunities to make women’s history more visible and discoverable.”

The duo’s research spanned 10 weeks, from May to July 2019. It involved a week of research on-site at the ELCA Archives in Elk Grove Village, Ill. For the rest of the project, they worked on campus at St. Olaf.

The culmination of their research is a website titled “50 Years On: A Half Century of Ordaining Lutheran Women.”

“I soon discovered the strength and resilience demonstrated by female clergy in the past 50 years.”

Magoon said she and Lagerquist wanted the website to answer such simple questions as “Who was the first woman ordained in the Lutheran church?” but also to direct readers to more in-depth research.

“Perhaps the biggest takeaway for me was the realization that all female clergy have not advanced at the same rate,” she said. “This year’s … anniversary shows that all women faced difficulties getting ordained, but women of color and lesbian clergy faced extraordinary obstacles.”

The website recounts the decisions of some U.S. Lutherans to ordain women and how those churches have changed in the subsequent half-century. It also provides access to data about women clergy that was collected for previous anniversaries, narrates a few individuals’ stories and provides a “Bibliography and ELCA Resources” section. A two-minute introductory video on the website sets the tone for some of the themes Magoon and Lagerquist explored.

“Again and again, we were struck by the dynamic interaction of Lutheran teachings about grace, vocation and the priesthood of all believers with American cultural developments,” Lagerquist said. “Although this was not a surprise to me, it confirmed that Lutheran theology—at its best—is always responsive to the realities of human lives.”

To view the “50 Years On” research project, visit pages.stolaf.edu/lutheranwomensordination.

My take: Why in the world would anyone get ordained today?