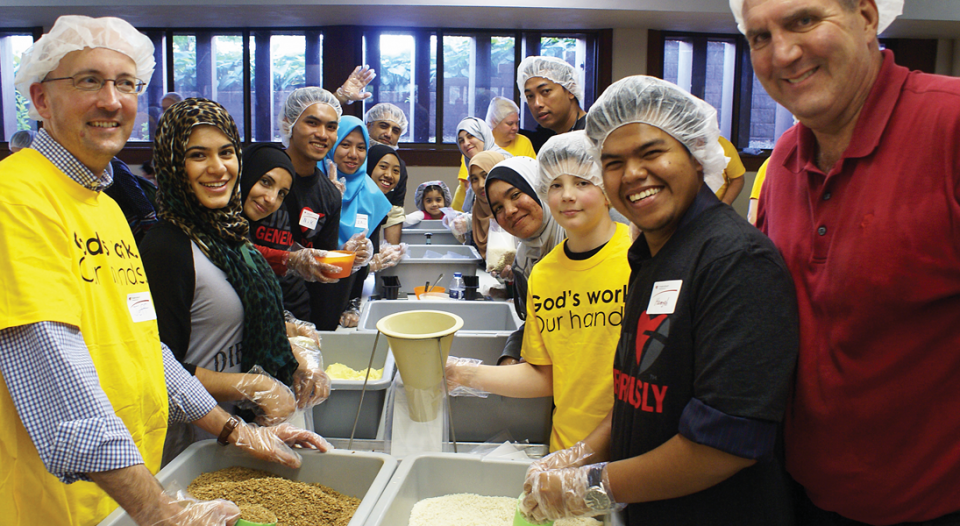 Members of University Lutheran Church and the Islamic Society of Greater Lansing, both in East Lansing, Mich., came together for their first “God’s work. Our hands.” Sunday partnership in 2015. The two faith communities have a friendship that spans decades.

University Lutheran Church and the Islamic Society of Greater Lansing, both in East Lansing, Mich., have a relationship that extends back to the 1970s. The congregations provide spiritual and religious guidance and services to Michigan State University and the surrounding area. The houses of worship also sit next to each other, share a parking lot and playground, and host interfaith events together.

The longtime friendship between the worshiping communities took a further step when University asked the Islamic Center to join it for “God’s work. Our hands.” Sunday activities in September 2015. The mosque’s spiritual leader, Imam Sohail Chaudhry, wasn’t surprised by the invitation, nor by his congregants’ eagerness to participate.

“When I came here, I was over the moon when I heard of the warm, close relationship with the Lutheran church,” Chaudhry said. “It is one of my goals to improve relationships with other faith communities and bring people of different faiths closer through education and collaborative efforts. In the case of the Lutheran church, I didn’t have to make much effort because this relationship had been established before I arrived.”

This strong bond laid a foundation for the mosque’s outreach to University when taking steps toward environmental stewardship. The Islamic Center approached its neighbor with a friendly challenge in the form of solar energy.

“The solar project implemented by the Islamic Center is our attempt to care for God’s creation by generating electricity without a trace of carbon footprint,” Chaudhry said. “As a house of worship, we didn’t want to merely preach [but] put our words into action. By producing electricity from a renewable source, we are conserving the environment as required by our faith.”

“When the Islamic Center surprised us with a gift of $25,000 for the [solar energy] project—although they said … we could use the money however we wished—the dormant idea came to life.”

Initially, the congregations contemplated installing a joint solar-power system between their property lines but realized the project was cost-prohibitive in the short term. So the Islamic Center moved ahead by installing its own system.

“We installed a 10.24-kilowatt solar array system on our rooftop, which generates only a small portion of the electricity we consume,” Chaudhry said. “Not only does it serve the primary purpose of generating electricity, but it also serves as an example for our members to follow. We are treating this as a beginning and intend to grow the array in the future until it can produce enough energy to be self-sufficient.”

On University’s end, the idea lay dormant for a couple years, but it wasn’t completely forgotten, especially by its Muslim neighbors.

“We knew the Islamic Center had installed a solar array and some money had been donated at [University] for the project,” said one of its pastors, Gary Bunge. “But there was not a great deal of energy for it except by the congregation’s Earth-keeping team. However, when the Islamic Center surprised us with a gift of $25,000 for the project—although they said that there were no strings attached and we could use the money however we wished—the dormant idea came to life.”

“There are some things money can’t buy, and the generosity of [University] is one of them. So we came up with the proposal of presenting the gift and challenging their members to match the donation.”

University was able to fund its end of the solar project with the center’s gift, other donations, a bequest and the money it had saved on utility bills during the COVID-19 pandemic. The solar panels were installed in early September and are producing electricity.

“Our friendship with University Lutheran Church spans decades now,” Chaudhry said. “We have worked together on several initiatives to benefit our local communities. When we could not fulfill our goal of a joint solar project and had to go our own ways, we did not want [University] to be left behind. After all, they are such wonderful neighbors to us, accommodating our parking needs every Friday and during the month of Ramadan.

“There are some things money can’t buy, and the generosity of [University] is one of them. So we came up with the proposal of presenting the gift and challenging their members to match the donation so that their energy needs can be fully met for decades to come.”

Chaudhry’s gratitude for the bond between the congregations is reciprocated by University. “We are so grateful for the friendship and relationship that we have with the Islamic Center,” Bunge said. “They are incredibly gracious neighbors. We are grateful that we can share our parking space with them, and grateful for the ways that we can come together to serve our community.

“This relationship is a gift to both worshiping communities and a model for the rest of the world.”

Sue Sprang
Sue Sprang writes for the “Mission in the Mitten” column of the North/West Lower Michigan Synod. She is a member of Christ the King Lutheran Church, Gladwin, Mich.