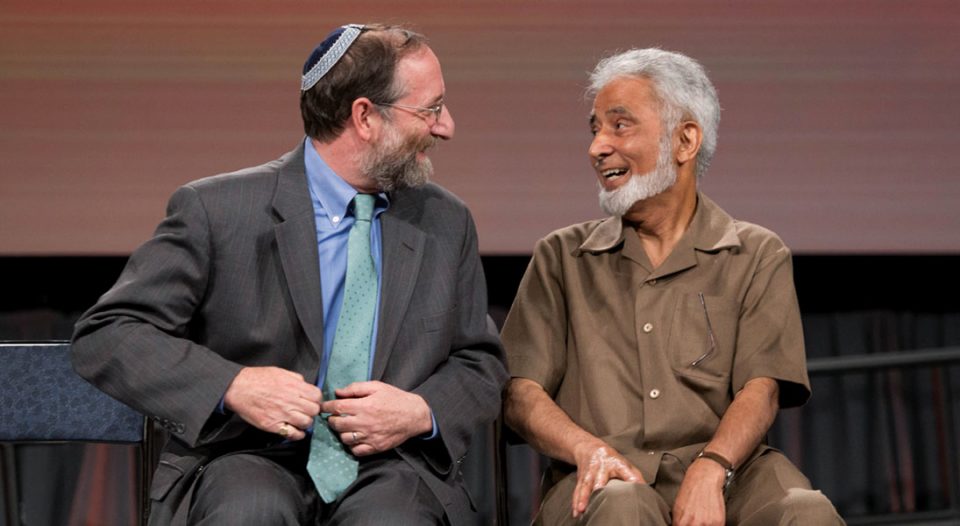 Rabbi David Sandmel, director of interfaith affairs for the Anti-Defamation League, and Sayyid Syeed, national director of the Islamic Society of North America’s Office of Interfaith and Community Alliances, gave interfaith greetings to the assembly. “As a young church, we have come of age in a time of rapid religious change. In the midst of such diversity, the role of the church is to build bridges,” said Eaton in her welcome to Sandmel and Syeed.

Of the many visitors to bring greetings to the Churchwide Assembly, arguably the most poignant came from Rabbi David Sandmel, director of interfaith affairs for the Anti-Defamation League, and Sayyid Syeed, national director of the Islamic Society of North America’s Office of Interfaith and Community Alliances. They spoke of our common ground as people of faith to work together for the common good.

“All of us who are people of faith, who are proud to identify with a particular tradition, must stand together to speak out, to act, and to protect those at home and around the world who suffer because of their religious identity,” Sandmel said. “This is one of the great challenges of our generation, one that we can only address together.”

Both leaders received a standing ovation.

Several international visitors were also present, including Medardo Gómez, bishop of the Salvadoran Lutheran Church. He spoke of the migrant crisis facing El Salvador and implored the assembly to approve the Accompanying Migrant Minors with Protection, Advocacy, Representation and Opportunities (AMMPARO) strategy.

“Sisters and brothers, in the name of God, and in the name of my suffering people, I say to you—forced migration has become a humanitarian crisis that exceeds our capacity to respond,” he said. “I declare to all of you: We need your help. We need your help welcoming our people into your congregations, accompanying them to hearings in immigration court, and interceding for them with U.S. government authorities.”

Martin Junge, general secretary of the Lutheran World Federation, addressed the assembly as well, highlighting the upcoming 500th anniversary of the Reformation, the Declaration on the Way and climate justice, among other things.

Bishop Susan Johnson, national bishop of the Evangelical Lutheran Church in Canada and Lutheran World Federation vice president for North America, brought greetings, lifting up the strong collaboration between her church and the ELCA. “Our relationship is important, in part, for our long and rich history as North American Lutherans, but mostly because it’s an important sign in these times that God’s mission and God’s church are never constrained by borders, and that the gospel of Christ compels us to work toward the breaking down of the walls that divide us,” she said.

Samuel Ndanga Toué, pastor and president of the Lutheran Church of the Central African Republic, also brought greetings. Toué spoke of the need for peace in his country, which is experiencing great poverty and continued economic strife. He also thanked ELCA members for their financial support and prayers.