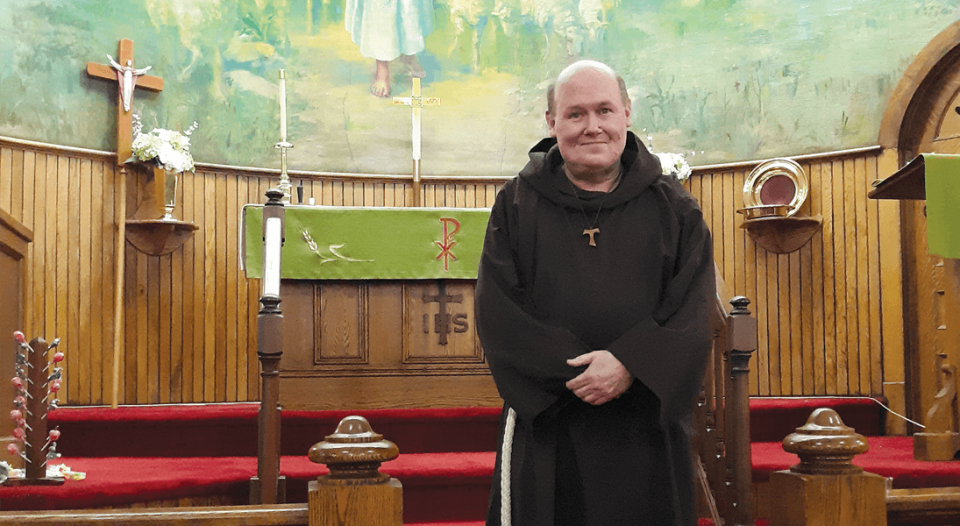 I awoke suddenly around 1:30 a.m. and glanced over at my wife. Her eyes were open, but she wasn’t breathing. After calling 911, I attempted to revive her as a feeling of utter despair struck me. Several minutes later, the EMTs arrived and worked on her to no avail. I listened in absolute horror as they called the hospital to report that she had died.

As they took my wife’s body away, I sat on our bed, frozen in shock. It took me quite a while to muster the strength to call my pastor and friends. I was devastated.

The days that followed passed in a haze. What I remember is that my church family and friends carried me as I grieved. I began to spend more time in contemplation and prayer. I pored over books on the lives of the saints. My favorite quickly became Francis of Assisi. The simplicity of his life, the depth of his devotion and his selfless service inspired me.

One night, as my pastor drove me to church, I mentioned that I wanted to become more involved in service and social justice to complement my devotional life and regular worship. I told him of my fascination with saints, and he asked if I’d read anything about the Lutheran Franciscans.

As they took my wife’s body away, I sat on our bed, frozen in shock. It took me quite a while to muster the strength to call my pastor and friends.

As soon as I returned home, I jumped on my computer and conducted a search. There it was! The Order of Lutheran Franciscans. It was exactly what I had been looking for and praying about. I knew it was where I belonged. This was a call. A clear call from the Spirit.

That same night I decided to request information. Right before I submitted the form, I stopped and prayed. If I was going to do this, I wanted to make sure this was where the Lord wanted me. I had learned over the years that sometimes the right decision involves a lot of discernment and discussion. I’d also learned that sometimes the Spirit just calls us to step into the unknown. Finally, I clicked “Submit.”

A few weeks later, I received an email from the order’s minister of formation. It included a lengthy application plus instructions to read a book about St. Francis and write a reflection about it. I later received six additional writing assignments to begin postulancy. I was so excited that I wrote and returned all six in a few weeks.

Afterward, I met with a member of the order. We spoke about St. Francis, my life story and what being a Lutheran Franciscan was all about. Then he said, “Slow down.” He explained that postulancy included a minimum of six months of contemplation and attending at least one annual chapter meeting. Those assignments I’d completed? They were designed to be written over a six-month period rather than weeks. I realized that, in my excitement to join the order, I’d rushed through preparations.

I agreed to slow down and let things happen at a more “spiritual” pace. Slowing down meant spending more time in meditation and silent prayer, waiting for the Spirit to speak.

The first annual chapter meeting I attended took place in Florida in 2019. The experience was incredible. I’ve never been with a more loving, caring, kind, generous and fantastic group of disciples. The relationships we formed exceeded all my expectations. I left Florida with a family of siblings unlike any I had known before.

Upon returning home, I was placed in a group with three others, and we began to meet monthly through Zoom to prepare to become novices. I continued working at my city’s day center for people who are homeless. I ran recovery meetings and helped people find housing, employment and food. I also discussed spiritual matters when asked.

Then the pandemic hit. The center was shut down, and the order’s 2020 annual chapter was canceled. It dawned on me that I wouldn’t be taking my novice vows, and, more importantly, I wouldn’t get to see my siblings in person. There would be no hugs. No services. No singing. No fellowship. I felt heartbroken.

Our servant council came up with a plan to get us all together anyway. My fellow postulants and I would attend a virtual annual chapter via Zoom, spend time in fellowship and worship, take our vows, and become novices.

I met with a member of the order. We spoke about St. Francis, my life story and what being a Lutheran Franciscan was all about. Then he said, “Slow down.”

The day of the virtual annual chapter, everything worked flawlessly, and our worship and sharing were wonderful. When it ended, I was a novice. I felt happy and humbled.

Sometimes—most times, actually—God works things out in God’s time much better than we can imagine. The extra time it took me to become a novitiate was necessary: I needed it to find the humility to walk as St. Francis had walked. I thank God for those lessons.

As someone who’s been part of the recovery community for a while, I know what it takes to build healthy communities. It takes trust and integrity. It takes the work of the Spirit. Through the vows of chastity, poverty and obedience, we walk the simple path of Francis and Clare of Assisi. In a world where we’re often confused about how to care for each other, the order guides me toward Jesus’ example.

Learn more about the Order of Lutheran Franciscans at lutheranfranciscans.org.

Called to a new life, ministry