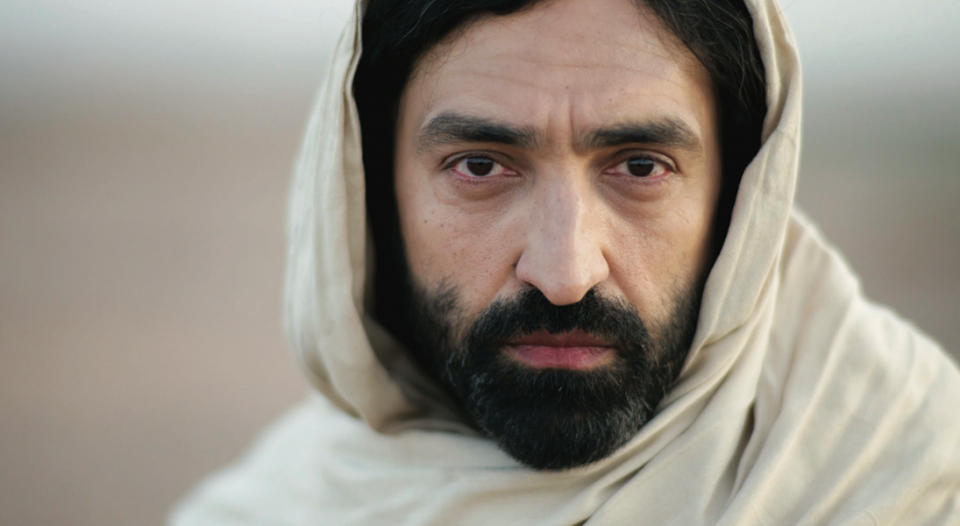 Jesus as portrayed in a film produced by LUMO, a resource that provides a visual translation of the four Gospels.

Since the beginning of the COVID-19 pandemic, I’ve been preparing virtual worship services for my congregation. Instead of reading the Gospel lesson, I use LUMO, a visual translation of the four Gospels. Through LUMO, I can engage my congregation from afar with rich, authentic images of Bible stories.

A person from my congregation told me that the actor who plays Jesus scares her. LUMO’s Jesus looks like a Middle Eastern man, with dark skin and short, black, curly hair. The congregant went on to say that she’s scared because she’s used to the image of Jesus portrayed as a white/European person with blue eyes, light skin and long blond or light brown hair. She believes I should stop using LUMO.

What is the actual image of Jesus?

In the later second century, Clement of Alexandria and Tertullian used the image of the suffering servant in Isaiah 53:1-3 to describe Jesus as an ugly man (he had “nothing in his appearance that we should desire him”). But church fathers such as Origen used Psalm 42:2 to describe Jesus as a handsome man (“When shall I come and behold the face of God?”).

The falsely attributed letter of Lentulus from the 13th century also portrays Jesus as a handsome man, tall and admirable, his eyes hazelnut-colored and his hair shoulder-length. Jesus’ face was free of wrinkles or spots, and his beard was short. This letter spread across Western Europe in the 14th century and has influenced portraitists and church art.

In the Western and Eastern churches, icons of Jesus Christ depict him with long hair and usually with light skin.

These descriptions of Jesus are based on cultural stereotypes rather than historical and archaeological analysis.

Why did the Western church uproot Jesus from his Palestinian culture and context and give him a foreign culture and color? Over the centuries, white scholars have interpreted the gospel to support the supremacy of white culture and to give people of European descent political power. Western European missionaries carried the white Jesus image to the colonized continents and turned white Jesus into an ideology. Missionaries opened boarding schools to indoctrinate colonized students to accept white domination. And colonized people naturally associated white dominance with white Jesus. In Nazi Germany, some scholars tried to strip Jesus of his cultural identity by proposing that Jesus was an Aryan, not a Jew.

White Jesus is a product of white culture and white theology. In the United States, this combination has advanced political power that has created systemic racism and Jim Crow laws. White Jesus becomes a norm of truth and a symbol of spiritual superiority.

Alexander Jun, co-author of White Jesus: The Architecture of Racism in Religion and Higher Education (International Academic Publishers, 2018), explains that Jesus was made white because the white evangelical churches in America, unable to distinguish between politics and faith, created Jesus according to the image of the dominant people.

Christians are continually exposed to the image of Jesus as a white man, which implies that God is white and affirms the superiority of the white race. Whether we admit it or not, many of us envision a white Jesus.

The New Testament doesn’t tell us what Jesus Christ looked like. Instead, it emphasizes his identity as a Jew and a descendant of David. His parents were Jews; he was born in Bethlehem and grew up in Nazareth. So that means Jesus must look the same as just about everyone else in Palestine.

In What Did Jesus Look Like? (Bloomsbury/T&T Clark, 2018), Joan E. Taylor draws on the Bible, archaeology and anthropology to determine Jesus’ features, studying Jews’ bones dating back to first-century Palestine. Taylor refers to genetic analysis of Israeli and Palestinian men that found “over 70 percent of the Jewish men and 82 percent of the Palestinian men … came from the same ancestors of the past few thousand years.”

When white-skinned people welcome a brown-skinned Jesus into their homes and churches, they embrace and live Jesus’ message and stand in solidarity with the disadvantaged.

She also depends on biohistorical analysis to assert that Iraqi Jews approximately resemble what Judeans looked like in Jesus’ time. Jesus, she concludes, was a man with brown eyes, olive brown skin and short black hair, likely bearded and probably around 5 feet, 5 inches tall, somewhat slim and muscular. In short, Jesus was a Palestinian Jew.

If somebody asks me what the historical Jesus looked like, I will answer that he looked Palestinian as I do—as my father, brother or cousin does. The question I have for Christians is: Are you willing to worship and follow a brown-skinned, Palestinian Jesus? When you close your eyes to pray, can you picture a dark-skinned and short-black-haired Jesus?

The white Jesus represents white privilege and spiritual superiority, but a brown-skinned Jesus represents the minority and the disadvantaged. Usually, we overlook the fact that the historical Jesus and his people were in the minority and were the underprivileged ethnic group in the Roman Empire. Jesus and his people suffered from Rome’s imperialism and oppression. He ministered to the disadvantaged and challenged the established power of his time that oppressed a colonized people.

I believe white congregations should put a brown-skinned Jesus image in their church buildings to remind themselves of who Jesus was and what he calls all of us to do in response to his grace and his sacrificial act of love on the cross.

Niveen Sarras
Niveen Sarras is pastor of Immanuel Lutheran Church in Wausau, Wis. She was born and raised in Bethlehem.

Perspective: Jesus was a Palestinian Jew
God came and dwelled among us, Emmanuel, incarnated as Jesus for the salvation of all of humanity in all our wonderful diversity. Though all humans may lay claim to Jesus as their “brother” and savior, he came into the world with a specific identity as a Jewish man from Palestine. Depicting Jesus as a white European is not merely inaccurate, it may subtly reinforce racism by implying that white culture is superior to others.
Download Now