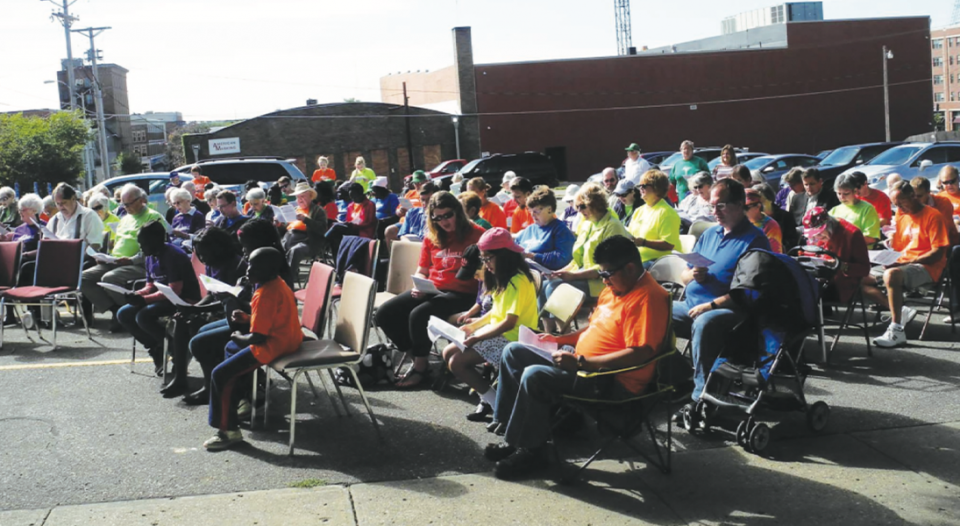 The congregation of Capitol Hill Lutheran Church in Des Moines, Iowa, is “so open and always willing to take risks for the sake of the good news. It isn’t always easy, or comfortable, but we trust that the Spirit is in the process, even if it doesn’t turn out how we hope or envision,” said Minna Bothwell, its pastor.

Recently taking a risk led the congregation to help people who were struggling with unpaid medical bills.

It began in January 2020 when the congregation voted unanimously to increase the percentage of its annual budget for mission giving from 3.5% to 9.5% in order to “reclaim mission giving as a priority.”

The pandemic didn’t change their focus on outward mission, and the congregation moved on with its plan. The decision to increase giving wasn’t something they hoped to do, but something they felt strongly about and intended to do. As the year unfolded, the congregation council began looking for ways the gift could have a big impact in their community.

“Jesus reminds us that we aren’t called to simply pray with people and invite folks to worship—we are called to bear the good news for each other in real ways that transform lives … that set people free,” Bothwell said.

After hearing the story of a member who struggled with unpaid medical bills, the congregation discovered a unique way to set people free from such debt. This led them to RIP Medical Debt, a nonprofit that helps the most vulnerable of those suffering under the weight of medical debt.

Research shows that in 2019 more than 130 million Americans faced financial hardship due to medical bills.

“As our community and nation suffered from a devastating pandemic, we thought partnering with RIP Medical Debt would have a significant impact,” Bothwell said.

RIP uses funds from donors to wipe out medical debt starting from the neediest cases, focusing on those who live twice below the poverty line. Every dollar donated forgives $100 of medical debt. A $100 donation translates into $10,000 debt forgiven.

“What if we took seriously our call as Christians to set people free from the things that are burdening and oppressing them—instead of judging them?” Bothwell asked. “If the church isn’t willing to step into these places of suffering and pain—in a very real way—then it will continue to exclude and dismiss the people that Jesus consistently sought out and called to be his disciples.”

The congregation started its campaign with the goal of raising $15,000, initially shared in a video message that spread rapidly among members. As excitement grew, they decided to try raising more money by inviting others outside the church community to consider a gift to the campaign.

“We had dozens of contributions sent in from people who were simply grateful we chose to do something about the debt crisis affecting so many families,” said Bothwell, who noted they received a large contribution from a nondenominational church in Dubuque, Iowa.

“At the same time, we fielded phone call after phone call, listening to people pour their hearts out who were desperately hoping we would know if their debt would be in the portfolios purchased.”

By the end of the campaign, the congregation had raised $42,000—nearly three times its original goal.

“When we announced [the total] during our parking lot service, members broke into applause and cheers. Honestly, it was so good for all of us to be living the good news in a real way. Our community, many of whom have and continue to experience hardship, felt loved in even bigger ways by the church,” Bothwell said.

“We fielded phone call after phone call, listening to people pour their hearts out who were desperately hoping we would know if their debt would be in the portfolios purchased.”

To date, the Capitol Hill funds have helped retire $1.4 million dollars of medical debt—targeted mostly for people in Iowa and Missouri. RIP will continue to purchase debt as it becomes available across the Midwest.

This fundraising campaign has not only had an impact on those whose medical debt was erased.

“Through participation in this campaign, our church didn’t merely just say a few prayers and throw a few pennies out of our abundance toward the project,” said Capitol Hill member Crystal Schrader. “Instead, we dug deep into our resources and surpassed our financial goals twice. We shared the stories of transformation RIP Medical Debt has on our fellow neighbors. We provided hope to people in Iowa and Missouri who needed to know that their lives matter and that they are beloved in the eyes of God and the church.”

Word has spread of Capitol Hill’s success. The congregation has received many letters of appreciation and Bothwell has been in communication with several congregations seeking information on how to partner with RIP Medical Debt. She is also brainstorming with pastors across the country about ways to address other forms of debt faced by so many people in this country.

Bothwell said this has reinforced “our call to continue to take risks on behalf of the gospel. We can, and will, continue to find real and authentic ways to love, heal and forgive people.”

A look at Capitol Hill

Ending hunger could bring us together

“You took care of me”

The stewardship of mission