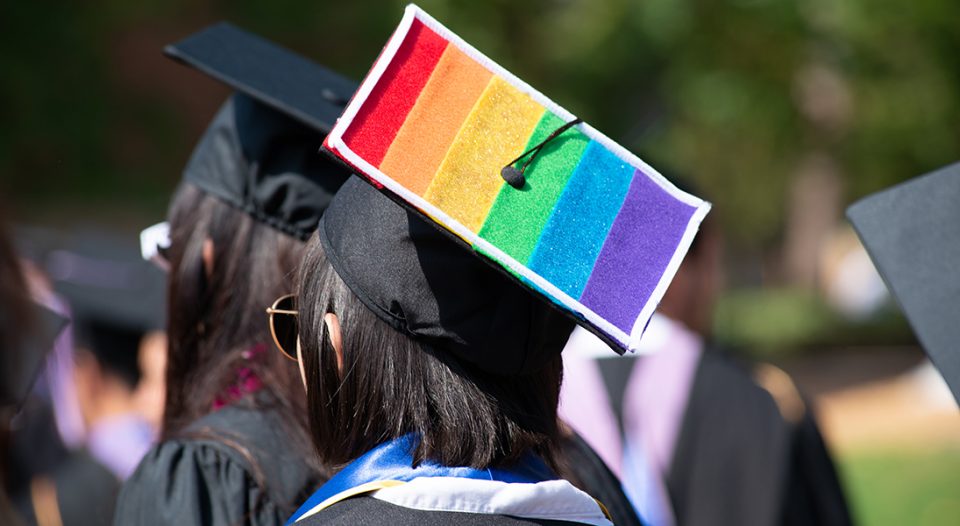 When I was 12 years old, my father came home from a church council meeting a bit disheveled. The church members were torn, he told me, over allowing same-sex marriages in their sanctuary. Many were conflicted, saying that the Bible condemns homosexuality and that we can love our neighbors without encouraging their “sins.”

Ten years later, so much has changed. The ELCA now welcomes all, regardless of sexuality. The “footer” for the church’s website proclaims, “We are the church that shares a living, daring confidence in God’s grace. Liberated by our faith, we embrace you as a whole person—questions, complexities and all.” People may debate theology and accurate interpretation of the Bible all day long, but ultimately no one can argue with John 15:12: “This is my commandment, that you love one another as I have loved you.”

For years, Christians hid away LGBTQIA+ people as if they should be some big, dark secret. But my friend Angela found the opposite in her campus ministry experiences at Wittenberg University, Springfield, Ohio. Angela is an early education major and religion minor. She joined Weaver Chapel Association (WCA) as a freshman and served as vice president in the 2020-2021 academic year.

“I was still carrying that shame with me as I came to [campus], and it’s been a very nice process to let go of that shame.”

Angela finds affirmation to be immensely important to both self-acceptance and acceptance of others. “I can validate other people until the end of time, but for myself it’s still a challenge. I’m still working on it and trying to build myself up with the right people,” she said. The friends she made at WCA became those “right people” through earnest conversation, authentic expression and open fellowship.

A favorite tradition of WCA students involves writing positive notes to one another, sealing them in envelopes and dropping them in the student mail at random times during the semester as surprise pick-me-ups. This speaks to our motto: “Our strengths cover each other’s weaknesses.” When we can’t affirm our own value and potential, we can count on others to help.

When some have refused to accept her pansexuality, Angela has encountered her share of “bumps in the road.” Regardless, she said, “I also realized that it’s really not something to be ashamed of, because I was still carrying that shame with me as I came to Witt, and it’s been a very nice process to let go of that shame.”

Angela said she was refreshed to see WCA members accept the LGBTQIA+ community. “There’s a lot of groups that just kind of avoid it and pretend it doesn’t exist, but we were able to talk about the controversies and why they are the way that they are.”

Maia Grandy
Maia Grandy is a recent graduate of Wittenberg University, Springfield, Ohio. She was a member of the Weaver Chapel Association and lead worship music for the contemporary worship service on campus.