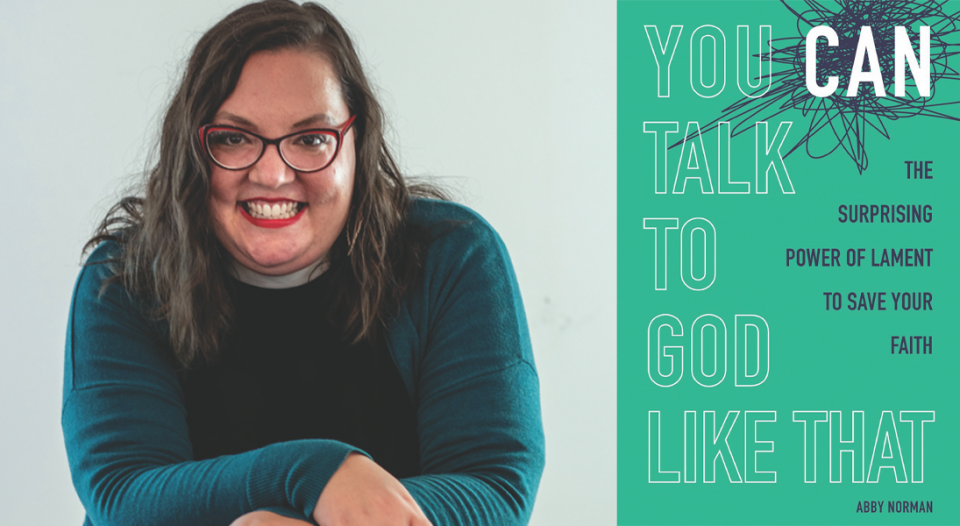 You Can Talk to God Like That: The Surprising Power of Lament to Save Your Faith (Broadleaf Books, 2021) is the provocative title of Abby Norman’s new book. A pastor in the United Methodist Church, Norman wrote the book because, though we find lament all over Scripture, neither our modern churches nor our culture seemed very good at the practice. This discrepancy, she said, invited her into a deeper conversation with God.

In her book, Norman argues that people of faith must lament to God, with one another and to the world as a prophetic act. Living Lutheran spoke with her about the concept of lament—in personal, communal and biblical terms.

Living Lutheran: What first got you interested in thinking about lament?
Norman: When I was a teenager, I ended up with fibromyalgia. It was a really scary time to have fibromyalgia because doctors were still arguing about whether or not it was real—it certainly was never diagnosed in a teenager. I spent years being sick and being part of a faith community, asking God to heal me, not getting any better and not finding any answers.

It got really bad when I was 17, and I almost dropped out of high school. My mom asked me if I was mad at God. I was horrified that she knew this secret about me. I said, “Yes, I am mad at God!” and I started crying. She said, “Of course you are. I’m mad at God too.” That permission to be mad at God was so freeing and so important.

Later, when I was in seminary, my professor talked about the importance of lament, and I was reminded of that happening in my teenage years. I thought, I don’t think very many people know this. I think this is the thing that has saved my faith over and over again.

You write about personal lament and how it can deepen our relationship with God, but also about lament’s role in the church body, as well as in the world. Can you tell us about those aspects?
I think of it as a pebble that drops into a pond. The first circles, for me, were personal lament, being invited to say, just [between] me and God, “This is stupid. I hate this. I don’t like what you’re doing. I don’t know why you aren’t fixing this. I don’t know what’s wrong, but I know you could fix it if you wanted to, and you’re not doing that.”

“Lament is a faithful way to pray to God.”

That is in the Bible all over the place—people saying those things to God—and it’s still faithful prayer. Lament is a faithful way to pray to God. So, if you start by saying, “I can be honest with God,” then you can move into “Maybe I could also be honest with my community.”

You’ll figure out pretty quickly whether or not a community is comfortable with lament. They’ll let you know, either by ignoring it, or moving on, or telling you how grateful you should be or how it’s not that bad. If you have a bunch of people who have personally worked with God on lament, then they are going to be better with each other. That practice within community allows you to see the things that are not from God in this world and to communally call them out as a form of public worship.

What would you say to someone new to the concept of lament who is thinking about getting started?
That it is a practice, which means you’re allowed to be bad at it. That’s OK, you’re just practicing. It might feel uncomfortable at first, and that’s OK too.

I think lament might be the answer, or at least a piece of the answer, to a lot of the really big questions that churches have been asking for a long time: “How do we attract a younger audience?” Actually, it’s authenticity. And what’s more authentic than lament? Or “Why does my faith still feel shallow?” Well, you’re still in the relationship part where you’re afraid to fight with people.

Relationships don’t last if you can’t have a fight and figure it out, and if you’ve never done that with God, [it’s difficult to make that relationship last]. It’s a piece of the answer to a lot of questions that we’ve been asking for as long as I’ve been in a church.

What are your hopes for your readers?
I hope that my readers are invited into a deeper relationship with God and with their communities. I hope that there’s more space in the church to say, “I’m really not OK today.” I hope that people are better equipped to just sit with other people and hold their grief with them.

A season of lament

What chronic illness taught me about grace

What can Christians learn from loneliness?