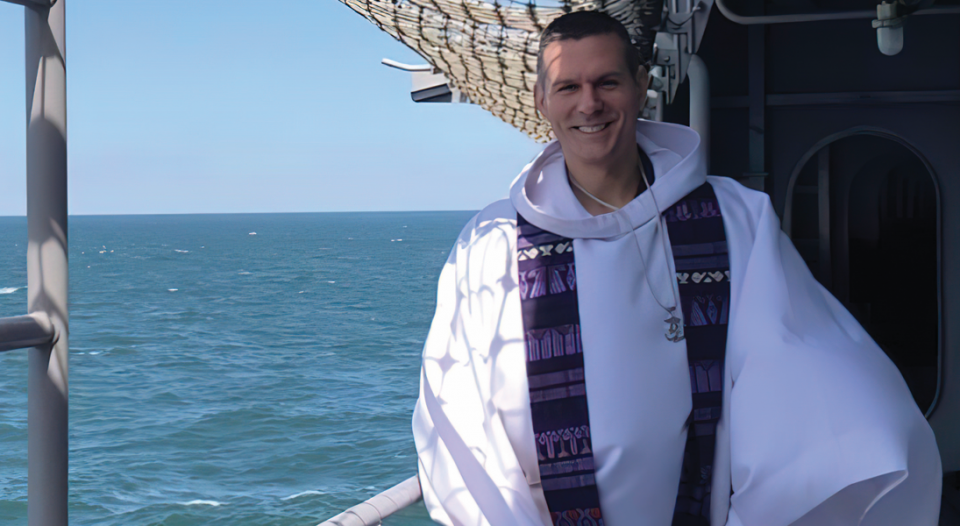 A.J. Striffler, a Navy chaplain, served onboard the USS Dwight D. Eisenhower last year. Because the ship avoided port to prevent spread of COVID-19, it set a record for the longest consecutive time at sea for any naval vessel.

I checked into my new command, the aircraft carrier USS Dwight D. Eisenhower, on Dec. 17, 2018. I was 48 and fresh out of Navy’s Officer Development School and Naval Chaplaincy School. While I had left chaplaincy until later in life, I was excited and ready to tackle this new ministry.

During my first full day at work, I sat at my metal desk in my tiny office—directly beneath the flight deck of one of America’s largest and most powerful warships—and wrote myself a note to hang on the wall: “My only job is to be here for the sailors.” That note kept me focused during the two toughest and most memorable years of my life.

Throughout 2019, the crew prepared the ship for its deployment in 2020. “Ike” had spent the two previous years in dry dock, having extensive work done. Many of the ministry spaces—chapel, lounge, computer lab and library—had received a makeover. Our department was ready.

Beginning in March 2019 we went out to sea for trials almost every month, our excursions ranging from four days to three weeks as we trained to do the nation’s business. I walked passageways and wandered into spaces, attended meetings and command functions, letting everyone get to know this new lieutenant.

Constantly surrounded by water and remembering my baptism, I lived into a ministry of presence that everyone seemed to connect with. Everyone soon learned they had a friend in “Chaps,” no matter their religious background (if any), their spiritual beliefs or their desire to attend worship; no matter their language, race, ethnicity, sexuality or rank. Feeling safe with someone is a rare gift in all branches of our armed services.

Feeling safe with someone is a rare gift in all branches of our armed services.

I became the officer in charge of the ship’s burials at sea. During our 2019 sea trials, we committed to the sea more than 100 veterans who had requested this final tribute. The Catholic chaplain and I, both committed liturgists, wrote the service together, and all three chaplains onboard took part, as did senior leadership. Our commanding officer, illiberal with praise, expressed how proud he was of the way we had performed this task. We were all off on the right foot.

But as 2020 dawned and tensions rose around the world, we began to see what our deployment would look like. We had been told to prepare for one thing but also to be ready for a very different contingency. Sure enough, we would head to the “hot” zone.

We left the pier in Norfolk, Va., on Jan. 16. About 28 days later, we started across the Atlantic Ocean, headed for the Middle East. We knew the temperature would rise and knew the potential for danger. We knew there would be times when internet, email and phones would be offline. What we didn’t know was that the world was headed into a pandemic, or how that would change everything.

By the time we reached the Mediterranean Sea and sailed through the Suez Canal, we realized that this would be a deployment like no other. Until more was understood about the virus, we wouldn’t stop in any foreign port. For now, we would “bubble” at sea.

The other chaplains and I wandered the ship and welcomed sailors—who were anxious about home and loved ones—into our various spaces. We got them connected when we could, or we reassured them, sharing jokes, laughs and boxes of gifts sent from the Daughters of the American Revolution or the Girl Scouts.

Until more was understood about the virus, we wouldn’t stop in any foreign port. For now, we would “bubble” at sea.

When COVID-19 spread onboard the USS Theodore Roosevelt, we knew our fate was sealed: we would remain isolated at sea for the entire deployment. Other ships would come to restock our supplies and bring fuel for the aircraft, but no one would come or go. We would remain on the job—a clean, closed system.

As chaplains, we planned for contingencies and trained for disasters as did everyone else. We presided at worship, wrote evening prayers and led various studies. Most importantly, we were always there for the approximately 4,800 sailors and airmen on the ship. Sometimes bored, sometimes exhausted, sometimes dirty and smelly, they would come to my office, sit down, put their feet up, get a snack and just talk.

At times they were frustrated, scared or just plain silly. But they would come to find me and feel safe to just be themselves. Our conversations were about everything but God 99% of the time, but I knew God was always present—I think they did too.

We returned to the pier in Norfolk 206 days after we’d left it, having broken the record for the longest consecutive time at sea for any naval vessel. Several holidays, a ceremonial crossing of the equator, and two times each through the Suez Canal and Strait of Gibraltar later, we set foot on dry land Aug. 9—a day after my 50th birthday. I stepped off that ship a disciple of Jesus whose life and ministry had been forever changed by the authenticity, resilience and courage of his sailors.