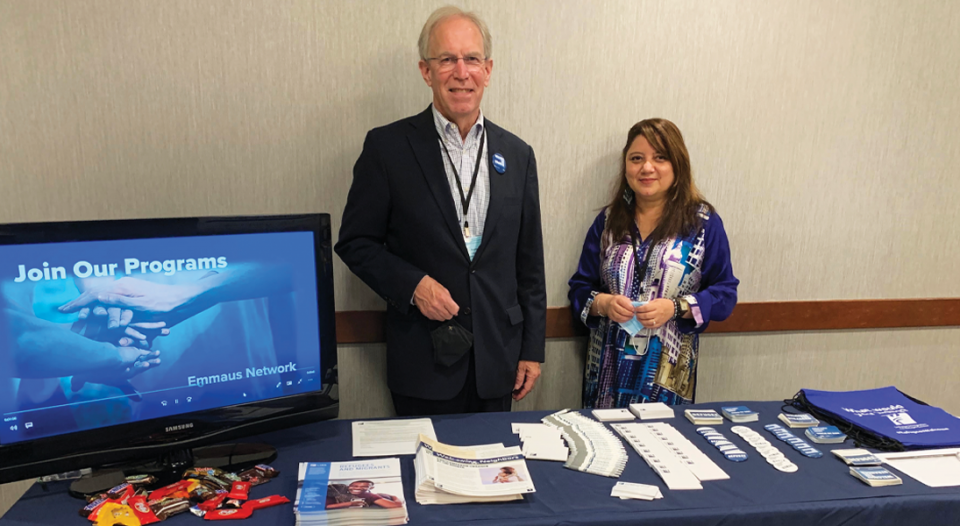 Dan Hannaher, field director, and Yasmeen Frost, resettlement manager, Lutheran Immigration and Refugee Service North Dakota, spoke at this year’s Eastern North Dakota Synod Assembly, telling congregations how they could support the agency’s work and thanking them for their generosity.

On Friday, Jan. 15, more than 250 employees received official notice that Lutheran Social Services of North Dakota (LSSND), financially strained by its housing affiliate, was closing after 102 years. Staff reductions were immediate, yet Dan Hannaher, director of New American Services at LSSND, said his team’s first thought was about a family of four from the Congo that had arrived in Fargo two days earlier.

“Our immediate response to the news was ‘What are we going to do to make sure our clients are taken care of?’ because they don’t speak the language, they don’t know their surroundings yet,” he said.

Hannaher notified LSSND’s partner of more than 75 years, Lutheran Immigration and Refugee Service (LIRS), about the agency’s closing and asked if LIRS had any creative ideas about providing for refugees in North Dakota. Within the hour, he was in a conference call with Krish O’Mara Vignarajah, president and CEO of LIRS, and the rest of the executive team. The meetings continued into the weekend and resulted in LIRS establishing its first field office.

“It took a while because we needed State Department authorization,” Hannaher said, “but by the middle of March, we were up and operating as LIRS North Dakota.”

LIRS is one of nine nationwide nonprofit resettlement agencies, and historically it has worked through partner agencies or affiliates—many of them Lutheran social service organizations. LIRS will continue to operate that way, but Lee Williams, its vice president for programs, said leadership had been talking for a while about increasing the amount of direct service the agency provides.

“When [LSSND] had to make the decision that it was going to stop serving the refugee and immigrant communities in North Dakota, it was an opportunity for us to expedite the process of establishing a field office,” he said. “[LSSND] was the only resettlement agency in the state, so its closing really would have a huge impact on resettlement.”

While plans for the field office were being put in motion, LSSND’s New American Services team never stopped working. Hannaher said they continued to provide services in a volunteer capacity for the Congolese family that had arrived just before the agency closed, and they started a GoFundMe page to raise money for rent and other family expenses, raising $14,000 in one weekend.

When Dan Hannaher learned that Lutheran Social Services of North Dakota was closing, his team’s first thought was about a family of four from the Congo that had arrived in Fargo two days earlier.

In the interim, the state of North Dakota assumed all refugee resettlement responsibilities. In February it had absorbed most of the former LSSND New American Services staff to continue their work.

“The state stepped in and said they were going to assume these programs to ensure there isn’t a lapse in service for folks who are in the communities until another provider is identified,” Williams said. “LIRS established its field office in Fargo, and the state has been incredibly supportive of our work.”

At press time, the state and LIRS North Dakota are sharing employees as the field office becomes more established and Hannaher gradually hires back former LSSND staff. Currently LIRS North Dakota is providing services for the “reception and placement” period, which covers the first 90 days of a person’s or family’s arrival in the United States. This phase includes getting people set up with Social Security, enrolling kids in school, and helping adults integrate into the community with job placements, health screenings and English as a second language services.

The state took over the second phase of support services, which can last up to five years after someone’s arrival and focuses on employment and self-sufficiency. But LIRS North Dakota has replied to the state’s request for proposals to provide that next phase of support.

“We hope we can be stood up again as we were under LSS, with a few changes,” Hannaher said.

For this fiscal year, which started in October, LIRS North Dakota has been asked to prepare for 250 refugees.

Hannaher said he is grateful for the outpouring of support the congregations and synod offices in North Dakota have provided as the field office develops. “With the guidance and support of a national organization like LIRS,” he said, “we’ve got new horizons.”

In addition to its proposal to the state, LIRS North Dakota has applied for several federal grants from the Office of Refugee Resettlement. One is for an individual development account program geared toward financial literacy and asset accumulation, and another is for a microlending program to help refugees and immigrants set up a business or expand an existing one.

“We’re always looking to expand our roster of programs and services that are helping our clients continue on their path of becoming citizens and prospering in the communities where they’re living,” Williams said. “We think North Dakota is a great place with a lot of welcoming communities, and we’re happy that we’ve been able to establish the program there.”

Hannaher agreed: “We at LIRS North Dakota have such gratitude for the partnership and loving care that is provided by our Lutheran congregations here. There is no more valuable a partner than we have in the ELCA.”

For more information, go to lirs.org/north-dakota.

A circle of welcome

A trail of altars