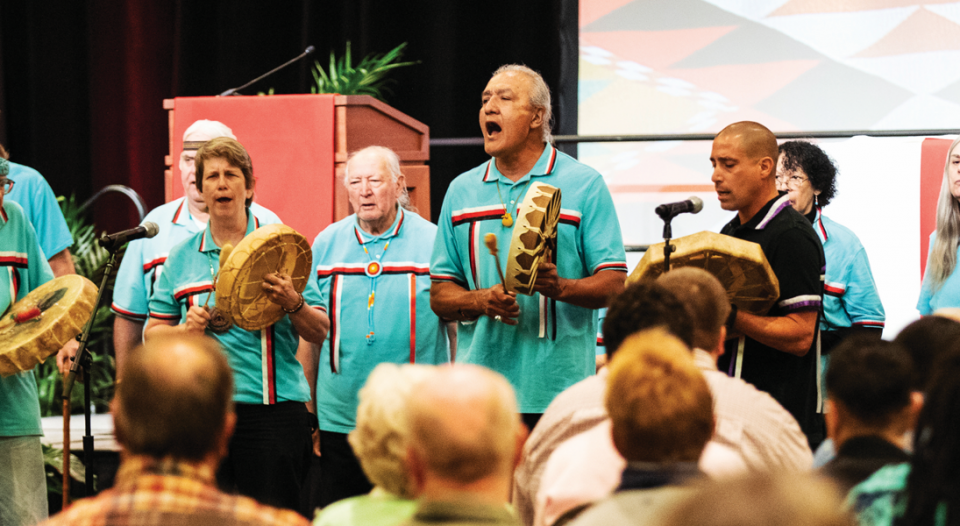 The 2019 ELCA Churchwide Assembly began with a Native American call to worship. In the service, Presiding Bishop Elizabeth Eaton acknowledged the tribal land in Milwaukee on which the assembly met. A task force is now determining the next steps the ELCA could take to further its repudiation of the Doctrine of Discovery.

In 1494, the Spanish and Portuguese empires reached an agreement that split up possession of the New World along a meridian near the Cape Verde islands. Though ignored by most European nations at the time, the Treaty of Tordesillas became the legal foundation for the Doctrine of Discovery, which allowed European, and later American, nations to claim lands occupied by Indigenous or other non-European, non-Christian people as federal property.

The Doctrine of Discovery laid the foundation for the United States of America, among many other nations on the American continents. But it has meant heartache, disease, death and loss of land for millions of Indigenous people living as far north as Greenland and as far south as Chile and Argentina.

The ELCA Churchwide Assembly formally repudiated the doctrine in 2016, citing the Augsburg Confession’s prohibition against “the improper mixing of the power of the church and the power of the sword” and laying out seven objectives for the ELCA. Some were straightforward, such as stating repentance and seeking reconciliation with the many Native American nations throughout the United States.

Other objectives require more work and consideration, such as correcting the centuries-old colonial mindset that approved of seizing land from Indigenous peoples without any agreement or compensation.

As the church prepares for its 2022 assembly, a task force composed of American Indian Lutherans, Alaska Native Lutherans and allies will determine the next, most actionable, steps the ELCA could take to further its repudiation of the doctrine.

The Doctrine of Discovery began to crack during the civil rights movement of the 1960s and ’70s, when white U.S. citizens began to examine the tragic histories of their nonwhite neighbors and question such ideas as manifest destiny, which argued that God favored white settlement of North America.

During this period, the Lutheran Council in the United States of America (LCUSA) partnered with members of the American Indian Movement to create the National Indian Lutheran Board, which raised funds, provided grants and lobbied on behalf of Native Americans and Native American entities. But the group was disbanded with the founding of the ELCA and the disbanding of the LCUSA.

At that time the ELCA hoped to take on the board’s work, but this idea fell victim to the struggle of merging the ELCA’s three predecessor bodies into one and navigating the new responsibilities of multicultural ministry. In the 1990s, the ELCA formally adopted a strategic plan and vision for Indigenous peoples, creating the American Indian and Alaska Native Lutheran Association. But more needed to be done.

“A lot of people think that all we need to do is apologize and it’s done,” said Vance Blackfox, “but a lot of Native American people need to heal.” A member of the Cherokee Nation, Blackfox is ELCA desk director for American Indian Alaska Native Tribal Nations. Previously he was part in the team that crafted the church’s statement of repudiation. “‘Repudiation of the Doctrine of Discovery’ is, in my opinion, a movement,” he said. “It’s a process.”

That process continues with the new task force, which will discern what actions the church needs to take to live up to the words approved by the assembly in 2016. Co-chairs Marlene Whiterabbit Helgemo, a member of the Ho-Chunk Tribe in Wisconsin, and Jessica Crist, bishop emeritus of the Montana Synod, have created small groups to develop various actions in time for the 2022
Churchwide Assembly as well as educational resources to shift the church’s teaching toward repudiation and reconciliation.

Part of that is shifting people’s ideas about land ownership and land acknowledgment (see also “Telling the truth about the lands we inhabit“). There are many Americans, especially Lutherans, whose ancestors arrived in the United States after the colonial expansion and westward migration, and who feel no culpability in the stealing of Indigenous peoples’ land. But the Doctrine of Discovery has given us more than broken treaties and federal seizure of lands.

“Everyone is, to some degree, hurt [by the land theft], especially the Native Americans,” said Guy Erwin, president of United Lutheran Seminary in Pennsylvania and a member of the Osage Nation.

Generations that followed were hurt by the rapacious capitalism of the late-19th and early-20th centuries, which encouraged western settlement.

“We’re all entangled in this,” he added.

“My dad [robs] a bank of $2 million and dies a week later, handing me that $2 million,” Blackfox imagines. “If I don’t turn it in, am I a criminal? It’s a simplified example, but the concept is still  there.”

That concept, he explained, is part of a larger effort to understand what it means for an entire nation to lose the land they have lived on for centuries; the loss of that land and the spiritual implications of losing it are traumatic. Centuries’ worth of ceremonies and rituals between the Creator and created have been lost.

Lutheranism from a Native American perspective

Even as the task force searches for ways to move forward with repudiation, it’s developing new initiatives in reconciliation.

One current project involves the language used to describe both Lutheranism and Native Americans. Another is  “A Declaration of the Evangelical Lutheran Church in America to American Indian and Alaska Native People,” released on Indigenous People’s Day on Oct. 11.

In the declaration, the ELCA acknowledges the theological and Christian foundation of the Doctrine of Discovery, which has codified colonialism and religious intolerance as societal norms for more than 500 years.

“The Doctrine of Discovery created a theological framework that supported racism, colonialism, and the annihilation of Indigenous people,” the declaration states. “Today it continues to support these evils and injustices found in our church, U.S. law, and legal interpretation. The Doctrine of Discovery has been pervasive throughout the world and has benefited the Church and ELCA Lutherans in every way.”

Included in the statement is a confession to American Indian and Alaskan Native communities in the ELCA and in the United States. To those in the ELCA, the church declares, “We have devalued Indigenous religions and lifeways and have not challenged the invisibility of Indigenous people in American society.” Among other things, it confesses to treating these communities as a minority group rather than as sovereign nations and failing to do more to repudiate the Doctrine of Discovery after the formal repudiation was passed in 2016.

To American Indian and Alaska Native communities in the church and in the United States, the church confesses its role in diminishing the importance of the land and acknowledges the complicity of the ELCA and its predecessors in accepting the benefits of the land stolen through numerous colonial measures and broken treaties. It further confesses to its failures in combating white supremacy and in treating Native peoples as equals, listing the many ways in which the church needs to learn more about its harmful roles.

To the non-Indigenous communities of the ELCA, the church confesses that it has benefited from, and not acted against, the Doctrine of Discovery and has failed to proactively support the church’s American Indian and Alaska Native Lutheran Association.

The declaration concludes with a pledge to all three groups—Indigenous ELCA communities, Indigenous communities in the U.S., and non-Indigenous ELCA communities. Each pledge focuses on doing more to understand the doctrine, the church’s role in perpetuating it and how to partner with Native organizations to end the harmful effects of the doctrine and become stronger advocates for Indigenous communities throughout the U.S. The declaration ends with an understanding that accomplishing its goal to actively and fully repudiate the Doctrine of Discovery will take more than words; it will take tangible action to undo the damage created since the late-15th century.

Crist said the declaration will be aimed at three audiences: Indigenous people outside the church, Indigenous members of the ELCA and their non-Indigenous fellow worshipers “We confess to each of those and we make a promise to each of those,” she said. “It’s a stronger statement than we’ve ever made before, and I’m excited for it.”

Finally, the task force is developing a new publication, Luther’s Small Catechism With a Native Perspective. Inspired by earlier Lutheran catechisms from Asian-descent and African-descent perspectives, the project is being overseen by Erwin, who has started asking Indigenous Lutherans to write interpretive reflections on sections of Martin Luther’s work. He hopes to have the book finished in time for Indigenous Peoples’ Day 2022.

Ironically, this won’t be the first time Native Americans contributed to the Small Catechism—its first non-European translation was in the language of the Lenape Tribe of Delaware.

Beyond a resolution
Five years have passed since the 2016 Churchwide Assembly approved (912-28) a declaration repudiating the 15th-century Doctrine of Discovery. The doctrine, sanctioned by the Roman Catholic Church, gave European nations license to “discover” undeveloped lands, annex them, exploit their resources and rule over the native peoples there. Many of the world’s Indigenous peoples, including those from the Americas, say Europeans used the doctrine to justify stealing their land and resources, and oppressing their people—crimes for which there has been no restitution and whose effects still linger.
Download Now