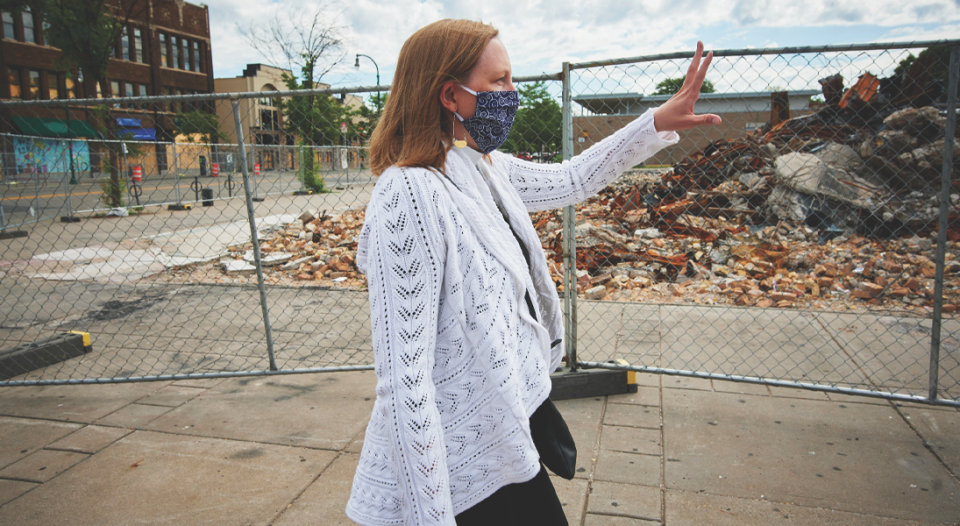 Ingrid Rasmussen, a pastor of Holy Trinity Lutheran in Minneapolis, walks through the congregation’s neighborhood after it was burned during social unrest that arose following the murder of George Floyd. Holy Trinity was able to serve its community as a medic station and distributor of basic necessities by using distribution money it received from being part of the ELCA Foundation’s Ministry Growth Fund.

When Ingrid Rasmussen became a pastor of Holy Trinity Lutheran nine years ago, the Minneapolis congregation had already invested in its future with a specific endowment fund through the ELCA Foundation.

In 2020, the congregation was able to use some of the distributions from that fund in an unforeseen—but much needed—way.

Holy Trinity is located in the Longfellow neighborhood, which burned after the murder of George Floyd. In the immediate aftermath of his death, the congregation served as a medic site for wounded demonstrators; in the months that followed, members distributed food and basic necessities.

The congregation has many different sources of income, yet the Foundation’s Ministry Growth Fund has provided much-needed stability throughout the years, particularly when the unexpected has arisen.

“I am absolutely confident that the interest in earnings allows us to be bold partners in this neighborhood and in this city,” Rasmussen said. “We can do things with and for our neighbors that we would not be able to do if we did not have this additional source of income.”

The Ministry Growth Fund was known as Fund A until last year, when it was renamed to better reflect its purpose. The endowment is a growth-oriented fund, invested in equities, that provides a stable quarterly distribution to its participants, said John Eggen, director of gift planning for the Foundation.

The Ministry Growth Fund “allows us to be bold partners in this neighborhood and in this city. We can do things with and for our neighbors that we would not be able to do if we did not have this additional source of income.”

Since Fund A was created in 1999, more than 1,200 investors have joined its ranks, including congregations, synods and ELCA-related organizations. Recently the fund surpassed the $1 billion mark, an extraordinary leap from its $60 million beginnings.

Eggen said a benefit to joining the Ministry Growth Fund is that, collectively, congregations and small organizations can access institutionally managed funds that they could not on their own. “It’s a great example of being church together,” he added.

Another draw of the fund is its commitment to socially responsible investing. Holy Trinity members found this appealing, both when they joined the fund more than a decade ago and in the last year as environmental issues became a bigger topic of conversation.

For an example, Rasmussen points to Enbridge Line 3, a crude-oil pipeline running through Minnesota that has become a huge local issue. The program to replace it, she said, “renewed our interest in exactly how the church was dealing with fossil fuel companies, including pipeline companies.”

The Ministry Growth Fund follows the corporate social responsibility guidelines of the ELCA, including investment screens, which means it excludes certain investments based on environmental, social and governance criteria.

“Our faith commitment addresses care of creation and climate change, and we asked [ELCA representatives] about their work they had done divesting from fossil fuel companies,” Rasmussen said. “They were willing to meet with us to talk through our questions. . . . We came out of that meeting feeling that the environmental screens that the ELCA had taken up were thorough. They’ve done thorough work on this, and that was reassuring.”

A fund for all

The Ministry Growth Fund is meant to serve every congregation, synod or organization, no matter its size, said Becky Palmgren, a regional gift planner for the Foundation. Participants must invest $25,000 initially, but regardless of the investment size, each fund member receives the same product and is charged the same fees. Some, like Holy Trinity, use their earnings for ministry purposes, whereas others utilize the fund for capital improvements or other endeavors.

“The church has changed, and we don’t know what the future holds for the financial sustainability of some ministries,” Palmgren said. “That has become an important part of what the fund can do for them. Because of the dual investment objectives, the Ministry Growth Fund supports ministries today and long into the future. This is important for members who wish to support the long-term sustainability of ministries.”

When the pandemic caused market values to plummet in March 2020, every participant in the Ministry Growth Fund still received the same distribution each quarter.

Eggen said that, in the history of Fund A and the Ministry Growth Fund, the ELCA has never missed or altered a distribution. “Fundamentally, we think that’s important to ministry support,” he said. “Ministry needs don’t correlate to market returns.”

There are other investment options for congregations, but, Rasmussen said, Holy Trinity finds the Ministry Growth Fund to be the best fit.

“The ELCA is not alone in providing some sort of socially conscious investment vehicle,” she said. “You could find that with any major investment firm. It’s more of a question of whether this pooled fund that the church is managing has a benefit to the wider church. And this congregation that I serve has long had strong commitments to synodical life, to the Minneapolis Area Synod and the churchwide expression of the ELCA. So it makes sense for this community to put their money there rather than elsewhere.”

For more information, go to elca.org/foundation.

A faster path to ministry

“A whole community of faith”

A bright and healthy future