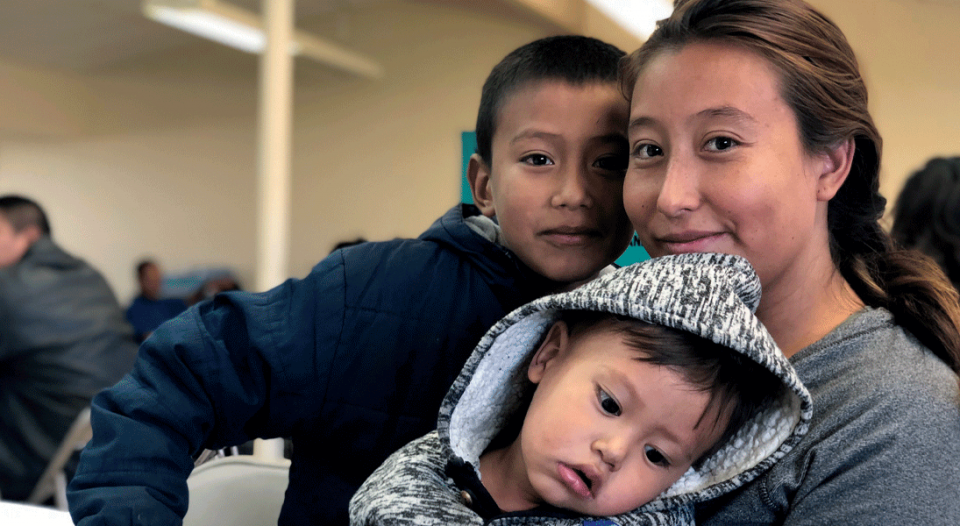 A mother and her sons (names withheld)—who came to the United States seeking refuge from gang violence and extortion in Honduras—wait for a meal while staying at the Welcome and Respite center in Phoenix. Managed by Lutheran Immigration and Refugee Service, the center offers asylum-seeking families short-term shelter and social support upon release from detention.

By the time asylum-seekers reach the Welcome and Respite center in Phoenix, they’ve migrated hundreds or thousands of miles to safety. The majority come from Central America, with a growing number from Africa, reports Lutheran Immigration and Refugee Service (LIRS), which funds the program.

Many are families seeking refuge in the United States from poverty, gang violence or other forms of persecution, said Basel Mousslly, LIRS program manager for migrant services.

They arrive at the center after days in detention—up to 20 for families and more for adults or families awaiting sponsors. Next, they face another journey: to join family or sponsors as they wait for their asylum hearing.

Connie Phillips, president and CEO of Lutheran Social Services of the Southwest (LSS-SW), has witnessed their fatigue firsthand: “They’re holding on to their children—dazed—in tattered clothes, shuffling because authorities removed their shoelaces in detention.”

Then families learn that LSS-SW volunteers are there to help.

“There would be this sigh, and then smiles,” Phillips said, adding that this moment is emotional for the volunteers too. In this liminal space, the families receive shelter and compassionate care before traveling onward.

According to LIRS, the Welcome and Respite program served more than 9,900 people between its inception, in January 2019, and fall 2019. The program—which operates in Phoenix through LSS-SW and had a site in Albuquerque, N.M., via Lutheran Family Services Rocky Mountains (LFSRM)—primarily serves recently released families in the Southwest.

Upon release from detention, these families may opt to receive transportation to a bus station, leave the detention facility on their own or visit a site managed by volunteers, such as the Welcome and Respite center in Phoenix.

“They’re holding on to their children—dazed—in tattered clothes, shuffling because authorities removed their shoelaces in detention.”

At that center, families receive food, clothing, hygiene kits and toys for the children. Staff offer them assistance with transportation, such as bus tickets, and, if needed, a letter in English to explain their situation to others. Families also access medical screenings from the 100 Angels Foundation, a nonprofit partner of LIRS and LSS-SW.

“I can’t imagine the fear that the recipients of our [program] experience—being tossed out of a detention center at all hours with nowhere to stay, no means of transportation, no one to turn to, nothing to eat or drink and no idea where to go,” she said. “We’re simply treating them like a human being deserves to be treated—with dignity, respect and compassion.”

Moussly said the Trump administration’s zero-tolerance policy, which began in April 2018 and resulted in family separations, was the catalyst for Welcome and Respite.

Between 2017 and 2018, LIRS reported an increase in the number of families apprehended at the southwestern part of the U.S.-Mexican border. In June 2018, the U.S. District Court for the Southern District of California ruled against family separations, and LSS-SW began working with LIRS to create reunification centers. LIRS reported that, in cities such as Phoenix, hundreds of people were released each day.

Phillips said a Phoenix hotel found space for some of the families, serving between 100 and 150 people daily in 2018, before Welcome and Respite officially began.

“We’re simply treating them like a human being deserves to be treated—with dignity, respect and compassion.”

After staying at a Welcome and Respite center for approximately two days, families move to their next destination with family or sponsors, Mousslly said.

“There are fewer migrants in detention because fewer migrants are even able to make it to the United States—more than 56,000 asylum-seekers are stuck in dangerous Mexican border towns awaiting their day in court,” she said. “As of Dec. 14, 2019, there were 43,327 people in ICE detention, and that number doesn’t include unaccompanied minors.”

Phillips said the need “has shifted to south of the border.”

People can help through “monetary donations and advocating for migrants to legislators,” Mousslly said.

And, as it has done since 1939, LIRS will evolve programming to meet new demands. “We try to be adaptable,” Phillips said, “because we don’t know what’s next.”


Often risking life and limb to come to the United States for safety and a new life, asylum-seeking families arrive only to find that their long hard journey is not yet over. As they work through governmental bureaucracy, families need tangible support and legal aid. Fortunately, some asylum-seeking families coming from South and Central America are finding that help among Lutherans.