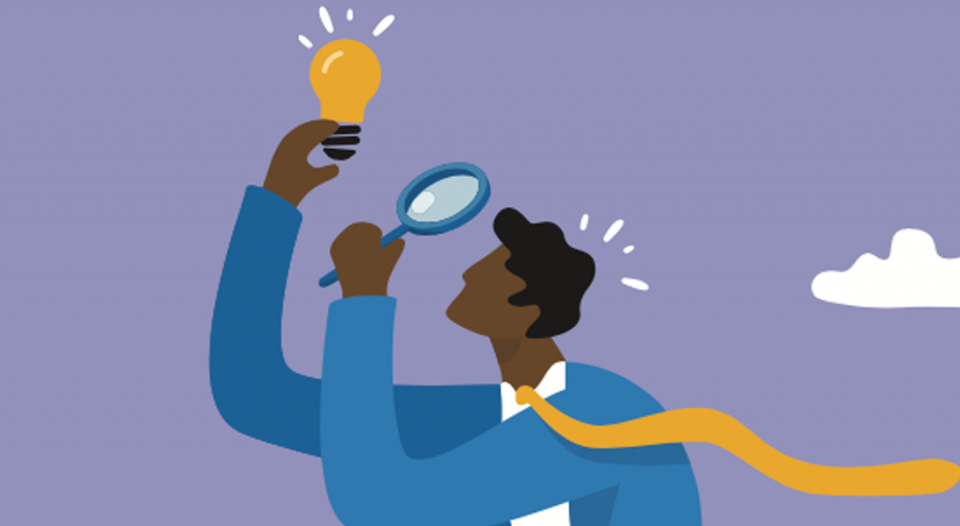 Several years ago I was having an over-the-fence conversation with my neighbor. My garden lay at the edge of my property line, and her children’s play set stood at the edge of hers, so we’d exchange chitchat now and again as neighbors do.

On this afternoon, she peeked over the pickets and said somewhat breathlessly, “Anna, today I had to take my daughter out of our Baptist day care and put her in the Lutheran one.”

This was clearly a big deal for her. “My goodness!” I exclaimed. “Why?”

“Well,” she said, “I was cleaning out her pockets and discovered a note stuck in her jeans that announced that they had been teaching her yoga.”

I kept waiting for a punchline like “. . . in the middle of a busy street!” But it never came. Yoga, it turns out, was the punchline.

She waited for my response. The best I had to offer was a confused expression. Then she said, “Don’t they realize that an open mind is just an open door to the devil?”

Those of us who identify as Christians can sometimes feel extra-emboldened—compelled, even—to be certain.

In that moment, I couldn’t help but think of the beloved Lutheran poet and theologian Gerhard Frost. I imagined him with his arms draped over the fence next to me, gently reciting from his poem “The Goal”:

In parenting and teaching,
let this be our aim:
not to make every idea
safe for children, but
every child safe for ideas.

When you get down to it, though, many of us are like my neighbor in that moment: we know what we know, we don’t know what we don’t, and we aren’t particularly motivated to move beyond that stasis.

Those of us who identify as Christians can sometimes feel extra-emboldened—compelled, even—to be certain. Lutherans are not exempt from this bent.

For starters, we belong to a credal church—a body of Christians who confess the Apostles’ and Nicene creeds, these statements of certainty. We are used to asserting unequivocally that we believe something—it’s expected of us. Even we Lutherans—for whom grace is so foundational and Paul’s reassurance that nothing can separate us from God’s love (Romans 8) is central—can be uncomfortable asking questions.

A hermeneutic of hospitality

There are a handful of reasons why Christians hesitate to ask questions.

First, questions might indicate doubt. If we doubt, we might disbelieve. And if we disbelieve, well . . . then what? How, we wonder, will God feel about that, about us, who once believed but are no longer as certain?

Second, we might worry that asking questions borders on disrespect. Can there be things about which God does not want us to wonder? Is asking questions an act of audacity and pride in the face of a mysterious, ineffable, powerful God?

Third, asking questions in public betrays that you can’t grasp something that perhaps you ought to. Admitting that you don’t know, you don’t understand or you’re not sure makes you vulnerable. It’s safer to pretend we have it all down pat.

“How can we equip our people to question and learn new things?”

One way of thinking about questions is through our Christian commitment to hospitality. No virtue, no habit, no representation nor manifestation of God’s essence and identity is more valued in Scripture than hospitality. Welcoming the stranger is God’s modus operandi—and therefore ours as well.

Might we consider being hospitable not only to people but to questions as well?

In Just Hospitality: God’s Welcome in a World of Difference (Westminster John Knox Press, 2009), feminist theologian Letty M. Russell writes: “In facing the challenge of a world of abundant difference and more than abundant experiences of exclusion and suffering, often rooted in a disdain for the ‘other,’ a feminist hermeneutics of hospitality can make it clear that in God’s sight no one is ‘other.’ . . .

“[A] hermeneutic of hospitality can (1) pay attention to the power quotient involved in what is said and who is saying it, (2) give priority to the perspective of the outsider, and (3) rejoice in God’s unfolding promise.”

In Russell’s articulation, we must recognize God in that hospitality-informed questioning because, though God’s promise is for all people, God is particularly concerned with people on the margins.

In one fell swoop Russell calms any fears we might have about asking questions in a faith context. God is always working at the margins, even the margins of our knowledge and imagination. By engaging those margins, we engage the possibility and promise that God—the God who brings peace out of fear and life out of death—can bring about something new.

New ways of thinking and being

Those who hold power can be the most averse to questions, a fact well known by people who traditionally lack it (people of color, women, members of the LGBTQIA+ community, immigrants). Womanist theology, which centers the experiences of Black women, has been at the forefront of posing this fundamental question (a favorite of theologian Delores S. Williams): “Whose voice is not being heard?”

Considering questions from the perspective of hospitality may prompt not only new wondering but new welcomes and ways of being.

“I became Lutheran because you can question,” said DaMisha McFarland-Pollock, a student at Wartburg Theological Seminary, Dubuque, Iowa. “That has been very freeing to know that you can question Scripture, you can even challenge Scripture, because of grace. But I’ve been struck by how little we’ve articulated this truth within our congregations.”

Some people, she said, reserve the right to question only to church leaders. “When a pastor begins to teach that it’s possible to question and to imagine, that can be very disorienting to people in the pews.”

By engaging the margins, we engage the possibility and promise that God can bring about something new.

McFarland-Pollock wondered why she didn’t learn about certain kinds of question-asking until she was in seminary. “I thought, ‘Why? Why do I learn that in seminary?’ God is big enough to handle our questions. We don’t need to protect, we don’t need to safeguard God. How can we equip our people to question and learn new things?”

She also wonders whether the ELCA has the capacity and courage to consider new ways of thinking and being. In her experience, most theological frameworks, liturgical traditions, preaching styles and cultural reference points stem from a white—especially white male—framework. “As a Black woman, when will the ELCA allow leaders of color to be our authentic selves instead of having to morph into a white man in our theology and in our articulation of our theology?” she asked.

Lutheran philosopher Tom Christenson loved questions such as these. He sought to cultivate a culture of questions, especially in the church and at Lutheran liberal arts colleges. (Christenson and my father were colleagues at Concordia College in Moorhead, Minn.)

In 1980, Christenson preached a chapel sermon at Concordia titled “A Place for Honest Questioning.” Based on Psalm 77—itself a litany of questions—the sermon began, “It is unfortunate that we do not have a place in our liturgy for the asking of questions. We confess our sin, proclaim God’s grace, preach God’s word; we praise, witness, affirm and so on. But we have no sacred occasion for questions, no rite of puzzlement.”

What would this look like, this opportunity for a communal holy acknowledgement that we are out of our depth? That we are curious about countless things? That, on an average day and more often than not, we can feel like a dog with its head cocked to the side?

Of course, there are liturgical rites for asking questions in the ELCA: the Service of Baptism and the Affirmation of Baptism.

The questions posed in these moments of worship may appear rhetorical. But one hopes that, prior to baptismal and confirmation services, candidates or their sponsors have been allowed to ask questions, learn, challenge and then come to a conclusion or two, not least about what a baptismal identity means.

These worship services provide an occasion for us to affirm, “Yes, I’ll throw my lot in with that. This understanding of God and faith and life and community and myself makes sense to me, resonates with me, claims me, calls me.”

These liturgical questions are not just rhetorical—they are sincere.

These liturgical questions, then, are not just rhetorical—they are sincere because embedded within them are claims and a framework for determining who we are and how we live. Among the questions:

As you bring your children to receive the gift of baptism, you are entrusted with responsibilities:
to live with them among God’s faithful people,
bring them to the word of God and the holy supper,
teach them the Lord’s Prayer, the Creed, and the Ten Commandments,
place in their hands the holy scriptures,
and nurture them in faith and prayer,
so that your children may learn to trust God,
proclaim Christ through word and deed,
care for others and the world God made,
and work for justice and peace.

Do you promise to help your children grow in the Christian faith and life?
Response: I do . . . .

Do you renounce the powers of this world that rebel against God?
Response: I renounce them.

“I became Lutheran because you can question.”

Baptized and engaged Christians have a specific framework, which is summed up in the litany above. Communally we believe that Jesus lived among us, healing the sick, feeding the hungry, forgiving the wicked and extolling the faithful. He ate and drank with gusto, taught, and was taught and welcomed. He was killed—partly for asking questions that roiled people in power—and we believe that he was raised from the dead. That resurrection assures us that nothing—not even the most dangerous questions—can separate us from God.

That assurance frees us not only from fear, sin and death but from our hesitancy to ask hard questions, uncertain questions, audacious questions, questions born of grief, wonder and humility. So, too, are we freed to welcome not only those questions but also the answers and their implications.

In this way we can confidently say, “This is what I believe—and maybe there’s more to it than that.”

When we do so, we open ourselves not to the devil but to the possibility of God bringing about something new.

Exploring the ‘eschaton’ of life

Freed to ask difficult questions
Martin Luther believed in questions. If he had not questioned the prevailing theology of salvation back in the 16th century, we might be worshiping in a very different kind of church today. Moreover, questions are woven throughout his beloved Small Catechism. “What is this?” “What is baptism?” Are we, however, hesitant to ask big questions of our faith, our Bible, our church and ourselves? If so, what can we do about it?
Download Now