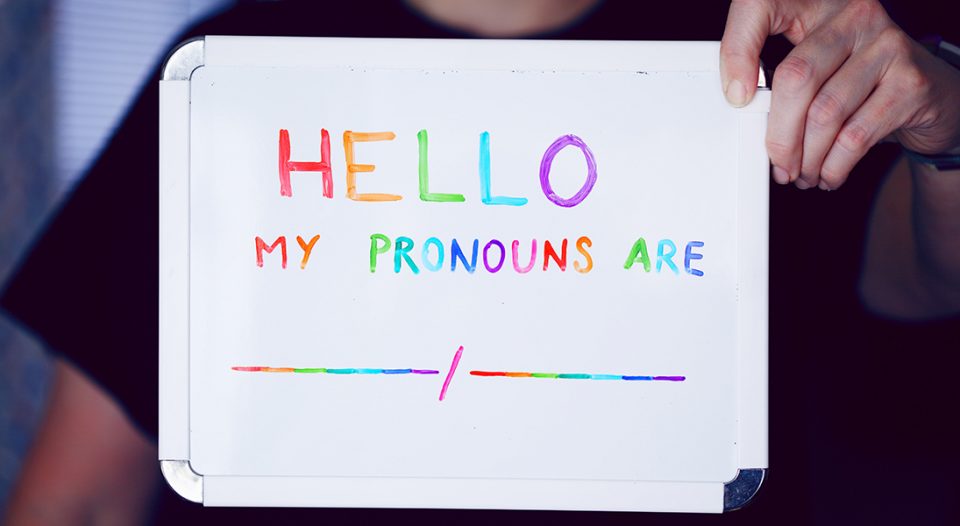 Many congregations looking to embody an evangelizing celebration of their LGBTQIA+ leaders, members, visitors and neighbors more actively have more actively turned their attention to pronouns. But what are pronouns, exactly? How do they work? And how can we use them in our congregational contexts?

There are many kinds of pronouns; in this case, we’re talking about personal pronouns. We often learn them as babies: “Look at that dog! Isn’t he cute?” or “Who’s at the door? Is it Grandma? Did she drive here?” Though we learn and use them almost naturally, personal pronouns can quickly become complicated.

In many languages, including English, personal pronouns are gender-specific, which requires us to make assumptions about strangers. For someone wearing a hair ribbon or long hair, we learned “she” and “her.” For someone with a deep voice, large hands or a button-down shirt, we learned “he” and “him.” But as we’ve grown older and our society has better allowed people to express who they truly are, we’ve learned that these assumptions aren’t always correct—and can even be hurtful.

Psychologists, scientists and faithful Christians have learned that basing our assumptions about someone’s gender entirely on their physical appearance can cause that person pain. Thus, many of us in the LGBTQIA+ community, and those who care for and advocate for us, have begun the practice of sharing our pronouns. This tells people how to refer to us—and reminds everyone to be careful about the assumptions they make about other people.

Research has correlated using someone’s correct pronoun with a decline in suicidal ideation.

Sharing pronouns can take many different forms. People can share pronouns in introductions: “Hi, I’m Emmy, and my pronouns are she/her.” (The slash isn’t spoken aloud but rather acts like punctuation.) Pronouns might be shared in an email signature: “In peace, Pastor Emmy (she/her).” Pronouns can be added to church staff and council bios online: “Pastor Emmy (she/her) has been at Grace for six years.” Some congregations with etched nameplates for staff and members have added pronoun pins (available in many styles and colors); others, like mine, use adhesive name tags each Sunday with space for pronouns too.

In learning to share pronouns, faithful people have also learned to release another assumption: that everyone fits into a box marked “he” or “she.” The internal and external ways each human relates to their own body, soul, experience and existence is more complicated than that. People who don’t fit into those boxes have begun using another common personal pronoun: “they.”

We might have learned as children that “they” refers to a group, but its use as a singular pronoun dates back to Shakespeare. People who use “they,” “them” and “theirs” as their pronouns do so because the labels “he” and “she” don’t quite fit, for a variety of reasons.

After years or decades of only knowing she or he, some of us might struggle with learning “they” for those who prefer it. Using the right pronoun might seem trivial, but the respect it communicates is an incredible gift. Research has correlated using someone’s correct pronoun (and name, if they’ve changed it from what we previously knew them as) with a decline in suicidal ideation. The right pronoun can literally save a life.

Even as faithful people wrestle with new concepts of gender identity, we can all practice a small change in our vocabulary to directly contribute to everyone’s abundant life.

A holding space for healing

A ministry sprung to life