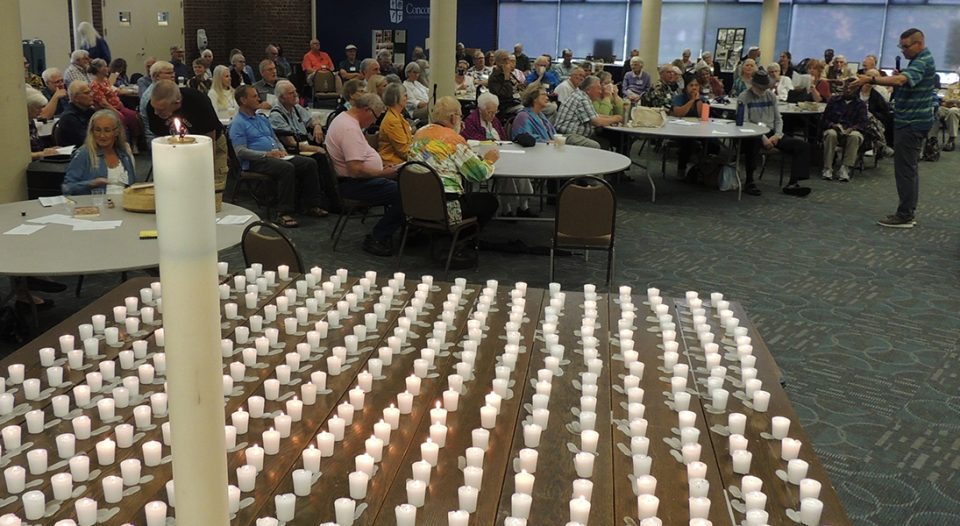 On June 13, former students and missionaries connected to the Lutheran Augustana School in Tanzania gathered for their first reunion in nearly 20 years. The candles pictured represent the 376 Lutheran missionaries who served in Tanzania between 1922 and 2022.

When Peter Friberg was 5 years old, he began attending the Augustana School in Kiomboi, Tanzania. Friberg was born in Tanzania to American missionaries from the Augustana Evangelical Lutheran Church (AELC), a predecessor church body of the Lutheran Church in America and ultimately the ELCA. He and his five siblings called Tanzania home, and the small school established for missionary children was an important part of their childhood.

Now Friberg is a retired ELCA pastor. On June 13, he joined other former students and missionaries connected to the Augustana School, which operated from 1953 to 1972, for their first reunion in nearly 20 years, held at Concordia University in St. Paul. Minn.

As Friberg recalled, students from first to eighth grade traveled to Augustana School every September, some coming as far as 350 miles, and lived in dormitories for the six months they were attending classes. Boarding with classmates for half the year nurtured strong relationships among the students, and many of those friendships have continued across time and distance.

“We would leave home in September for three months, come home for one month, and then go back to school again for three months,” Friberg said. “So that much time together, you can imagine the relationships we built at that boarding school.”

Lois Danielson Carlson, a “missionary kid” who didn’t attend the Augustana School but knew many of its families, has been a key figure in keeping the students and missionary families connected over the past seven years. She took over management of a prayer chain email that had been organized by Marie Benson, mother of an Augustana student.

“John Benson’s mother used to offer a prayer chain, and when she became ill, she had her sons ask me to continue it,” Carlson said. “The idea for a reunion came up several years ago, but we didn’t have enough people to make it happen. I suppose I helped to stir the waters to get the planning going this year.”

Today, the Evangelical Lutheran Church in Tanzania has nearly 6 million members, which makes it the second largest Lutheran denomination in the world.

Carlson and Friberg assembled a team of planners and began organizing the pan-Lutheran event that would become the reunion. This year also marks the centennial of the first missionaries arriving in Tanzania from the AELC, which further inspired the planners.

Nearly 100 former students and 23 missionaries—many over 90 years old—attended the reunion, along with their families. Alumni from Norway, Sweden and Germany gave presentations on missionary activities in Tanzania from their own countries.

Friberg described his personal reunions as “amazing. … We were really close friends.”

“You have college and high school reunions, but you never have grade school reunions,” Carlson said. “Because it was a boarding school, this felt more like a family reunion.”

Today, the Evangelical Lutheran Church in Tanzania has nearly 6 million members, which makes it the second largest Lutheran denomination in the world. The missionaries and missionary kids who attended Augustana School take great pride in the work they did to support and contribute to the flourishing of the Lutheran Church in this part of Africa. The reunion gave them the opportunity to celebrate that legacy of growth.

Attendees of the reunion hope they won’t wait another two decades for the next one. Though Augustana School operated for less than 20 years, the relationships they established in childhood have continued well into adulthood—a testimony to the impact of a small boarding school in Tanzania on so many lives.

Nicholas Tangen
Nicholas Tangen is director of faith practices and neighboring practices with the Minneapolis Area Synod. He writes about faith and community engagement at nicholastangen.com.

An interview with Bethany and Steven Friberg, ELCA missionaries