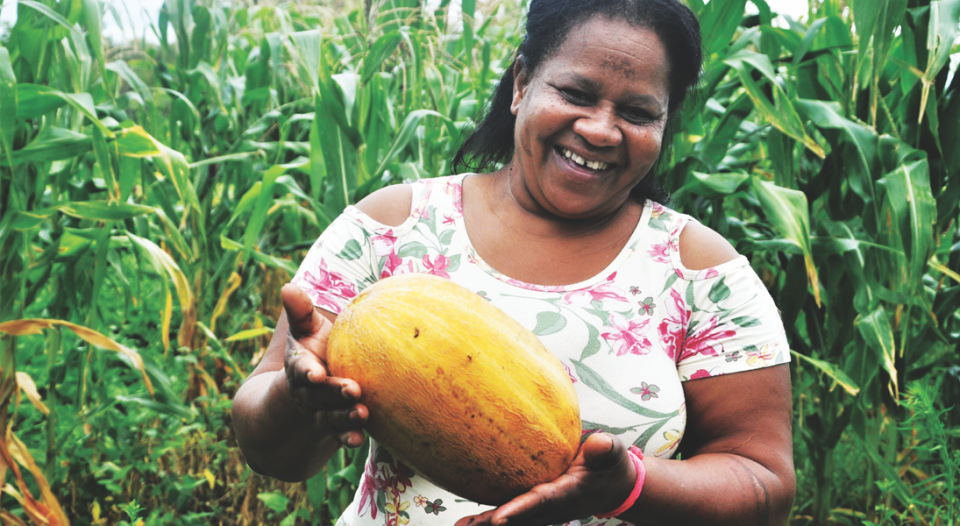 Marta Madeira has strengthened her family’s food security through her participation in an ELCA World Hunger-supported program in Brazil that provides farmer’s field school training.

About an hour’s drive south of Pelotas, Brazil, lies the Kilombola community where Marta Madeira’s family lives along with eight other families. Even on summer’s hottest day, Madeira greets everyone with warm hospitality—coffee, fresh bread, a broad smile and excitement to share her story.

Madeira and those living in Brazil’s Kilombola communities are descendants of Afro-Brazilian enslaved people who fled cities and farms to protect themselves in the 18th and 19th centuries. As a result, they have remained largely isolated from the rest of Brazilian society. They have struggled against inequality and neglect for centuries, often lacking basic needs like running water, sanitation and access to health services.

In her community, Madeira’s parents raised seven children; she has three and has welcomed two grandchildren. While her parents worked hard, they struggled to provide food for the family. Her father’s job kept him out of the home, working long hours, and she remembers her mother’s dedication to caring for her children.

“Many times, my mother would get up at dawn to go get oranges so that we would have something to eat for breakfast, and then she had to take care of all of us [for the remainder of the day],” Madeira said.

“Many times, my mother would get up at dawn to go get oranges so that we would have something to eat for breakfast.”

In 2009, the Center for the Support and Promotion of Agroecology (CAPA) project of the Fundação Luterana de Diaconia (FLD)—an ELCA World Hunger partner—accompanied Madeira’s community in a process toward incorporating through “self-recognition.” Achieving this milestone changed everything, namely that children and youth gained access to school transportation.

This was only the beginning of FLD/CAPA’s work with this community. Of the several significant changes in the life of the Kilombola people there, the farmer’s field school training is what gets Madeira most excited. The knowledge she gained has allowed her to grow a diversified vegetable garden, strengthening food security for her family and creating an essential source of income.

“For the last two years, I have been planting more and more,” she said. “This last year, I have already stopped working [as a cleaner] in some houses. At the moment, I work only in two houses that I intend to leave soon and make my income only from the garden—because besides giving me much more joy, it has also given me a great financial return.”

Madeira’s harvests teem with sweet potatoes, pumpkins, corn, herbs, peppers, melons, cabbage, beets, mustard, green beans, lettuce, fava beans and peas. Each week she shares what produce she has available to sell in a WhatsApp group of about 50 families. Orders are placed and a friend delivers the produce to the families in the nearby town of Jaguarão.

Each week Madeira shares what produce she has available to sell in a WhatsApp group of about 50 families. Orders are placed and a friend delivers the produce to the families in the nearby town of Jaguarão.

While Madeira is proud of her garden and how she can use the income to improve her home and support her family, she emphasized that she has greater demand for the produce than she can meet. She hopes to obtain access to a tractor next summer to expand her garden and increase her sales.

“In one or two years, I want to be a very different Marta from today—a Marta who has achieved many things with her work and made many improvements in her home because of my vegetable garden,” she said.

“I am already a very different woman from five years ago, when I stayed at home washing clothes, cooking and taking care of things around the house. Today I can go anywhere and make a difference for myself, my family and my community. I want people to see what we are capable of doing by producing food.”

The Fundação Luterana de Diaconia (Lutheran Foundation of Diakonia) was established by the Council of the Evangelical Church of the Lutheran Confession in Brazil. It works with socially vulnerable groups and impoverished communities without discrimination on the basis of ethnicity, gender, political conviction or religious beliefs.

This summer, ELCA youth are participating in the Global Farm Challenge, a whole-church campaign to equip small farmers like Madeira. Learn more at elca.org/globalfarmchallenge.

Lindsey Queener
Lindsey Queener is the communications manager for ELCA World Hunger and Lutheran Disaster Response. She and her husband live in Washington, D.C., where they attend Augustana Lutheran Church.

A walk to end hunger