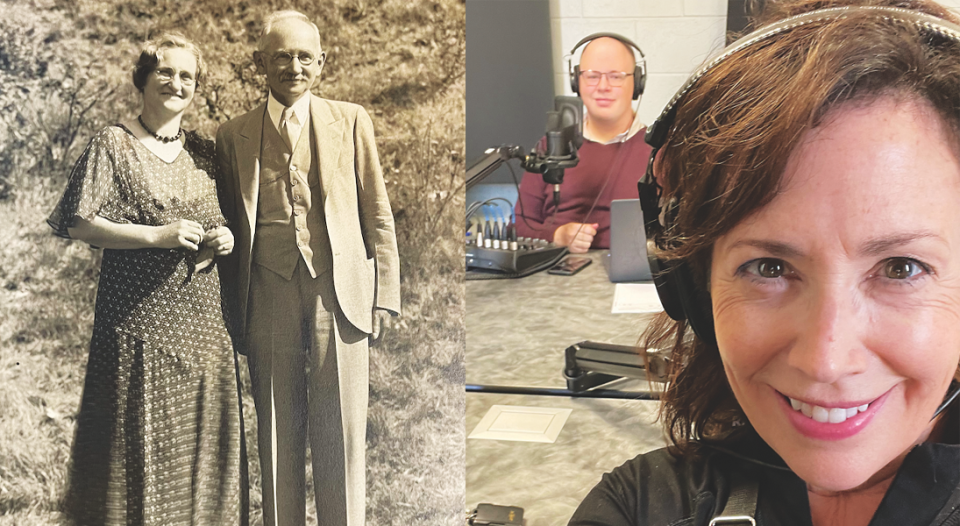 Karen Thalacker and Andy Newell host the podcast The Homes, which tells the stories of staff and residents of the title community (now the Lutheran Living Senior Campus) in Muscatine, Iowa. From 1921 to 1941 Thalacker’s great-grandfather, Lutheran pastor William Klein, served as superintendent of the Homes. His wife Emma ran the home for the aged.

Karen Thalacker’s family has a long history with the German Lutheran Orphans’ and Old Folks’ Home, commonly called the Homes, in rural Muscatine, Iowa. From 1921 to 1941 her great-grandfather, Lutheran pastor William Klein, served as superintendent of the Homes, known today as Lutheran Living Senior Campus. Many family members have worked at the facility since its founding in 1895.

When Thalacker—an attorney; a judicial magistrate; the Title IX coordinator at Wartburg College, Waverly, Iowa; and a member of St. Paul Lutheran Church in Waverly—started researching the history of the Homes, she discovered that little information was available and that much of the materials that did exist were deteriorating. Simultaneously her son Andy Newell, then a history major at Wartburg and today a graduate student at the University of Nebraska–Lincoln, was gathering information on the Homes for a research paper.

Last year Thalacker, Andy and his brother Robby Newell—a photojournalist at WKOW-TV in Madison, Wis., and a fellow Wartburg alum—launched The Homes, a podcast about true stories of sorrow and joy, compassion and cooperation at the Lutheran Homes. Thalacker and Andy Newell co-host and co-produce the podcast, which Robby Newell edits. They aim to create a central repository where they can preserve the materials they’ve found, in partnership with Wartburg College Archives, which has started a collection on the Homes.

The podcast’s first 13 episodes present stories of the Homes’ various residents and staff from 1929. Following a successful first season, The Homes will release a second, with episodes set in 1930, later this year.

Living Lutheran: How did you decide to start a podcast on the Homes?
Thalacker: I grew up hearing stories about my family’s connection to the Lutheran Homes of Muscatine, but I didn’t realize how little I really knew until listening to my dad and his cousins at a family reunion sharing stories about the Homes and their recollections of visiting their grandparents there. After the reunion, I began searching for information but was surprised that only very limited information was available.

Andy and I were researching on parallel tracks—he was locating and analyzing primary source materials to more broadly document life at the Homes, and I was researching our family’s connection. What we both uncovered were incredibly compelling stories that had almost been lost forever. We felt strongly that the people who lived there, worked there and died there should not be forgotten, but we were unsure how to convey the information to a larger audience.

Our faith calls us to open our eyes to the suffering and needs of those around us and then do something about it.

It was my daughter Ella who suggested creating a podcast, and everything fell into place from there. … We built a picture of the Homes using personal recollections, newsletters and events that occurred in Muscatine and throughout the world.

What have been some of your favorite moments from the show’s production?
Thalacker: I enjoyed learning about the day-to-day life there. With so many residents … they had to live by a rather strict routine. I loved hearing about everyday occurrences like what they ate, how they celebrated holidays and how they spent their free time. It was a very difficult life, but there were also moments of great joy.

One moment I will always remember is when Andy and I realized that we had found film footage of the Homes from 1938. We had it digitized, and watching the film and seeing my great-grandparents in action was so special. I also enjoyed working with Andy and Robby on the production of the podcast; what a gift to do this together.

Andy Newell: I don’t have a favorite moment, but I have a favorite kind of moment, and it happens a number of times throughout the podcast—[stories] where people have come into hard times and unfortunate events, even life-altering trauma, but they are surrounded by a loving community that is grieving with them. When we share those kinds of moments, it solidifies the humanity of this story. These were real people with real lives, and their influence may have been lost to the passage of time without our work and without people encouraging us and listening to the podcast.

What do you hope listeners take away from The Homes?
Thalacker: We hope that listeners will be inspired and reflect on how we treat the most vulnerable in our society. The [staff] at the Homes were not superheroes—they were people making extraordinary sacrifices to ensure that the residents were cared for and loved. The ELCA refers to itself as a “publicly engaged church,” and our faith calls us to open our eyes to the suffering and needs of those around us and then do something about it. Each of us can make a difference in the life of a child or an elderly member of our community, and we hope The Homes inspires listeners to do just that.

Learn more about The Homes and where to listen to episodes at thehomes.buzzsprout.com.

If you have information about the Homes to share or items to donate—especially their pre-1950 newsletters—contact lifeatthehomes@gmail.com or send a direct message on Instagram @lifeatthehomes.

An infectious enthusiasm for theology

A new way to tell the church’s story