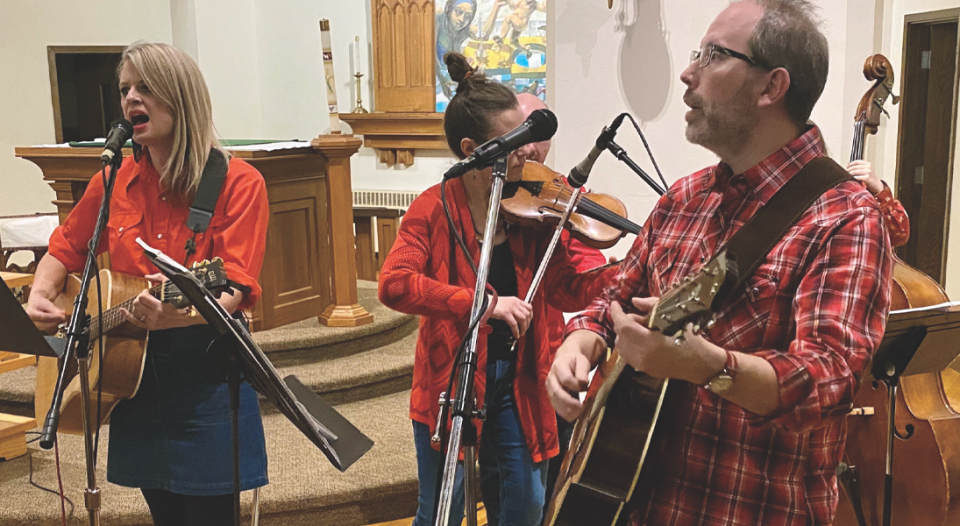 Photo: Courtesy of House of Mercy

The Mercy Machine Band is a local alt-country group and the house band at House of Mercy, St. Paul, Minn. Inspired by old-time country gospel songs and hymns, the band’s repertoire includes songs by the Carter Family, the Louvin Brothers, Gram Parsons, Johnny Cash and The Band.

For 25 years, music has played a vital role at House of Mercy, St. Paul, Minn. In addition to regularly hosting concerts by local and national acts, the congregation has immersed its worship in Americana, country and gospel music, including original songs by the Mercy Machine Band, the “house band” at House of Mercy. The congregation also operates a record label, House of Mercy Recordings.

When Minnesotans began to shelter in place due to the COVID-19 pandemic, the congregation started thinking of ways to stay connected while isolated. In March, House of Mercy launched The Shut-In Sessions, a 15-minute podcast featuring performances by musicians who have contributed to House of Mercy and prayers for the day written by community members.

The Shut-In Sessions supplements House of Mercy’s existing weekly podcast—featuring the week’s sermon, Scripture readings and music, which continued digitally during the pandemic.

Living Lutheran spoke with Russell Rathbun, a pastor of House of Mercy, about The Shut-In Sessions and how the congregation has stayed connected during the pandemic and the nationwide racial justice protests that began in the Twin Cities.

Living Lutheran: Could you let readers know a bit about the importance of music in the history of House of Mercy?
Rathbun: When House of Mercy started 25 ago, it was the waning years of the church growth movement—suburban churches trying to imitate shopping malls—and praise music was big part of their formula. The music seemed as one-dimensional as the theology to us—or at least it didn’t resonate with us. Other Gen X, emergent-ish churches were starting around the same time and faced similar issues with the music: they didn’t have a lot of experience with traditional hymnody and the praise songs did not reflect the questioning, nuance-laden nature of the community. Other similar churches turned to writing their own music or [a] rewriting-lyrics-to-U2-songs sort of thing.

We stumbled [into] country and gospel music. We liked that it was the music of people of faith, but people wrote about what they got up to on Saturday night as well as Sunday morning.

As we dug deeper into the Americana/country and Gospel canon, we discovered such a deep and varied collection of traditions and musicians—the Carter Family, the Louvin Brothers, Franny Crosby, Thomas A Dorsey, Hank Williams—and new groups inspired by the music playing in clubs.

Our house band started writing original country and gospel music, and there were other great local musicians doing that who were just fantastic. We wanted to listen to their records, but they weren’t out there. So we started making the records we wanted to hear. … Since our first record in 1999, we have put out 45 records. Born of the same impetus, we published a hymnal, Songs of Mercy.

“This time of quarantine, among other things, has shown how much we all need and rely on the creators, makers, writers and musicians.”

How did you decide to start The Shut-In Sessions?
When the stay-at-home orders were first being declared … it was dark, and people were sitting at home isolated. We needed to find a way to connect. We all needed a shot of mercy. So we thought just hearing from somebody outside your house, checking in with you, and hearing a couple of songs and how the musicians were doing and then a prayer for the day seemed right.

And, of course, at the same time everything shut down, every musician’s gigs disappeared instantly. … So many musicians have done so much for House of Mercy over the years and given so much to the community, we thought The Shut-In Sessions could serve as sort of a venue for a mini-gig. We put a tip jar on our website and asked listeners to contribute as well as support the musicians directly through their websites. This time of quarantine, among other things, has shown how much we all need and rely on the creators, makers, writers and musicians—so this is a great time to support them.

What have some of the most meaningful episodes been for you?
There have been so many great ones. Everyone brought so much of their heart and soul to it. I ask each guest to treat it like a live gig—to give a little intro about where they are holed up, with who and how they are doing—and it feels so intimate when you hear it, and so many of the prayers that close each episode sound like a poem written just for the occasion.

What do you anticipate for its future?
The Shut-In Sessions kind of had to take a back seat [even as our regular weekly podcast continued] with the unrest following the murder of George Floyd by members of the Minneapolis Police Department. The protests and the rioting in St. Paul were focused on the area directly around the church where we meet, and we became very involved in the support efforts led by Bethlehem Lutheran Church in the Midway (our host congregation). The whole neighborhood was devastated—the grocery stores were closed, public transportation was shut down. The church became the center of food collection and distribution, as well as supporting protesters with medical care, water, masks. It was remarkable how many hundreds of volunteers came every day for weeks.

In addition to getting back to production with the podcast, we are going to record some episodes live from the church lawn, in a very COVID-safe, social-distancing way, as part of an effort with Bethlehem in the Midway to continue to stay engaged with the community and to provide an opportunity for folks from the congregation to come back together in a limited way, if they are ready to be a little less shut in. And if not, they can listen at home.

What has the response to be the podcast been? Has it helped the congregation to connect with each other—and people outside the congregation to connect with House of Mercy?
The response has been great. It seems like it is connecting to people in the way we had hoped. I’ve had a couple people both in and outside of the House of Mercy community say that it is just the right amount of church. I can’t help thinking that the one part of church service that is missing is the sermon—but I try not to take that personally. I am happy to be able to serve the church-in-under-15-minutes demographic.

Listen to episodes on Apple Podcasts, Spotify and Stitcher. Learn more at houseofmercy.org.

Go looking for the word