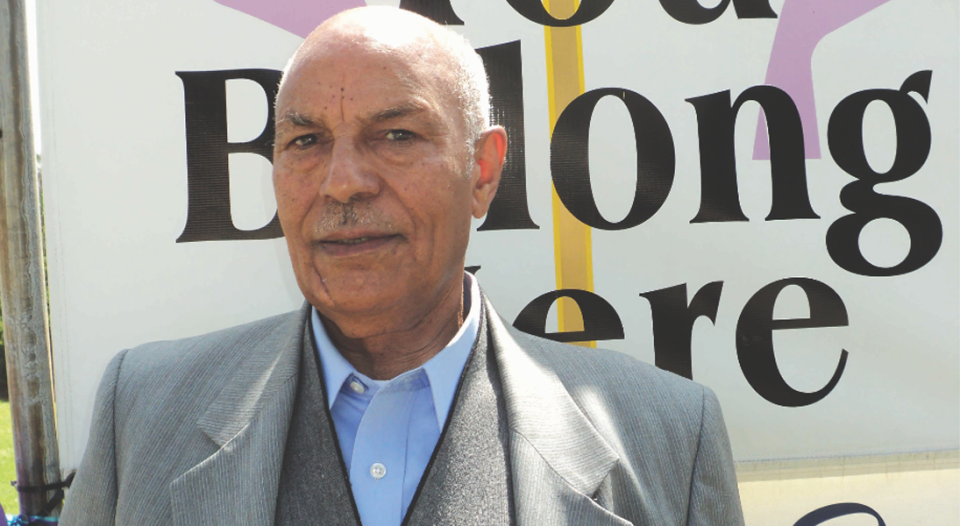 Growing up, I was one of nine children, born in the village of Takita, Eritrea, which was then in the northern part of Ethiopia. I was helping my parents with everything that I could do in that age: tending sheep and goats, fetching water from the running river, fetching firewood and so on—plus, of course, I was going to school too.

I enjoyed my experience working in the Malaria Eradication Training Center in Nazareth, Ethiopia, training to become a lab technician while finishing high school. In October 1969, I was assigned to the Bahir Dar Gojjam province as a malaria supervisor and stayed there until September 1974, finishing high school by night school in 1971.

In October 1969, I was assigned to the Bahir Dar Gojjam province as a malaria supervisor and stayed there until September 1974, finishing high school by night school in 1971. My experience was great there, traveling from place to place, working among the people of Gojjam and Begemder around the Blue Nile River, Lake Tana and the Blue Nile Falls.

The Ethiopian Civil War, fought between the Ethiopian military junta and Ethiopian-Eritrean anti-government rebels, began in 1974. In June 1976, the Ethiopian anti-insurgent Raza Project was prepared to run a massive war against the Eritrean fighters the Eritrean Liberation Front (ELF) and the Eritrean People’s Liberation Front (EPLF) to eradicate them once and for all. The junta socialist leader also declared, “We need to eliminate those who are living among us,” then started arresting, killing and torturing Eritreans. At this time, I escaped Ethiopia by night, forced to flee, leaving my family behind, and traveled five nights to reach Eritrea.

After I reached Eritrea, the ELF fighters took me, and the security leader in that area assigned me to work in the clinic provided for civilians, around 6 miles from Asmara, the capital city. I stayed there from July 1976 to December 1977. I was giving all kinds of medical services to adults and children who came to the clinic. In January 1978, I left the clinic and was assigned to teach nurses with other fighters for six months in Barka. And then for the next six months, I was giving lab training on communicable diseases such as malaria, typhoid, measles and so on. From February 1979 to August 1980, I was leading the program that was organized to protect and control communicable diseases. Wherever the epidemic broke out, I would go there to study the situation and then take action and control it. At the end of those six months, in February 1981, I was switched to military services. I stayed there until I left the field and fled again by night to Sudan.

“I escaped by night, forced to flee, leaving my family behind.”

In Sudan, in April 1981, I was employed by the Sudan Council of Churches/Eastern Sudan Relief Programme (SCC/ESRP) to work among Eritrean refugees in camps that had around 80,000 people. I was assigned as a senior laboratory technician in one of the biggest mother and child health care clinics, then I was assigned as an epidemiologist in the anti-tuberculosis program. In March 1983 I was assigned as a public health inspector in 12 out of 16 refugee settlements where SCC/ESRP was working, up to September 1983.

I applied to get out of Sudan wherever I could get the opportunity at a United Nations High Commissioner for Refugees office in Gedaref, Sudan. Then, after U.S. Citizenship and Immigration Services workers came to Gedaref to perform the interview process, they interviewed me, and I succeeded. Finally, in November 1983, I left for the United States and arrived in St. Louis without a green card.

After I arrived in my destination of St. Louis, an Ethiopian man met me and took me to dinner at his house. That Sunday he took me to church with him, and the church was Lutheran. I liked it—there were other Ethiopians too. Plus, there were Bible study programs every Sunday; I joined and continued with them for five months. Then, after my Ethiopian friend advised me to become a member, I asked the pastor to help me to become one. A month later I became a Lutheran.

When I came to Redlands, Calif., I was a Lutheran member already. On April 14, 1984, I went with my friend to First Lutheran Church of Redlands. When we walked through the church doors, we found Pastor Frank Gearhart, and he welcomed us and asked us who we were. We explained to him we were Ethiopian refugees who had come to Redlands legally. He asked us about our situation and if we had families. My friend said, “I have a family with me,” and I said, “I have a family, but they are in Ethiopia.” Pastor Gearhart said, “Abraham, we are going to help you bring your family here.”

Lutheran Immigration and Refugee Service and Pastor Gearhart began work on my family’s behalf and, after six months, we had an approval from the immigration office. But, unfortunately, the government of Ethiopia didn’t allow them to leave the country. Instead, after two years, my family did make the journey to Sudan. They were helped by smugglers at night, with camels as their transportation, all the way until they reached their destination in Port Sudan peacefully.

“Pastor Gearhart said, ‘Abraham, we are going to help you bring your family here.'”

Pastor Gearhart then wrote a letter to the U.S. Embassy in Khartoum, Sudan. The Embassy replied, “We will send them within 90 days,” and did it accordingly. On Jan. 15, 1987, they called Pastor Gearhart from New York and told him, “Abraham’s family are on the way to Los Angeles—get them now.” When Pastor received the message, he called and made me surprised. Right away, I marched to Los Angeles with my friends, and we had our reunion in the Los Angeles airport.

When I think about being reunited with my wife and children after 10 years, I wish I had a special language to express my heart’s feeling at that moment. It was very hard to explain and hard to believe how I felt. My eyes filled with tears; none of my children remembered me.

To me, grace means God’s blessing (i.e., grow in Jesus’ love, and live in Jesus’ grace).