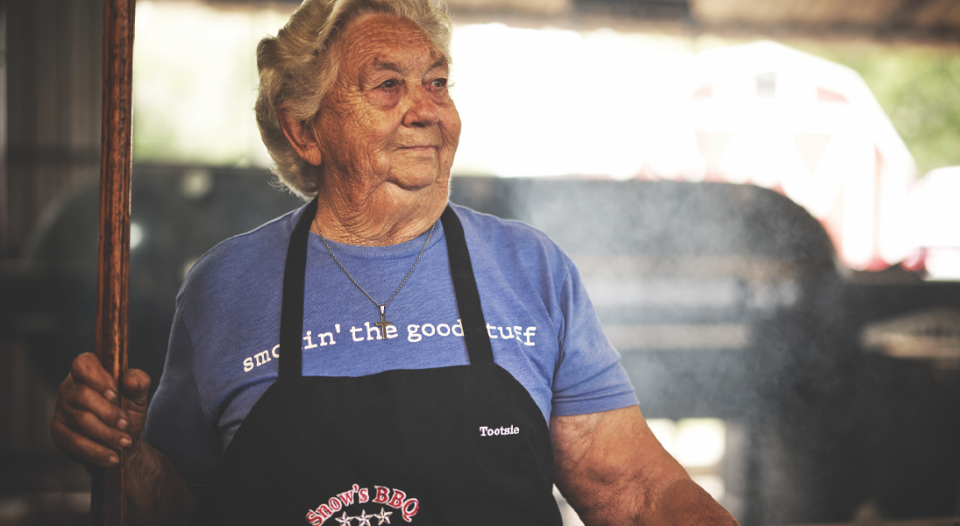 Martin Luther Lutheran Church in Giddings, Texas, is my home church, but I attend regularly at Grace too. But—and that’s, I guess, where I’m different from a lot of people—I don’t put one church in front of the other or put one better than the other. It’s all God’s church, it’s just that some of them have different beliefs. … I was raised in the Baptist church. We always had two services, mornings and afternoons. When people ask me, “How do you even go to two churches on Sunday morning?” I say that I was raised attending two church services on Sundays, so what’s the difference if you have them both in the morning or one in the morning and one in the afternoon?

I became involved with Grace when, in 2015, my youngest son was diagnosed with brain cancer. He didn’t attend church officially, but this one Sunday morning, he wanted to go to the Cowboy Church [of Lee County in Giddings]. I told him that if he wanted to go to church, I’m taking him to the Cowboy Church. It’s all the word of God. So I took him to Cowboy Church. He’d been in a wheelchair because he’d lost the use of his leg, with the chemo and surgery and radiation, and I had a hard time getting in.

Another Sunday he wanted to go, and I said, “Let’s go to Grace. They’ve got a ramp up there and it’s easier for me to push your wheelchair.” [He said,] “Well, that’s fine—that’s OK with me.” And he was comfortable with it. And I could tell that Sunday that he was so welcomed by everyone there. The pastor and everyone came up and wanted to offer him prayer and lay their hands on him and pray for his recovery—which, with brain cancer at stage 4, you find that you don’t have much to go on. He always lived in hopes that he would get better.

And I just got close to that church then, and it was easy for me to go because Martin Luther’s services were from 9 to 10. That’s too early to eat lunch. So, then after Martin Luther, I went over to Grace at the church service there from 11 to 12. It’s a wonderful Sunday morning. And then having lunch with some of them and spending the afternoon together, I’ve just enjoyed it.

“I’m very proud of [the barbecue’s] success, but at the same time, I thank God for giving me the ability, body-wise, that at 87, I’m still able to go.”

Each week, I just keeping coming back. It’s God’s hand that’s leading us in this work that we’re doing for him—to show our faith in God, that we can show it to someone else and maybe a little will rub off and then they’ll decide to check it out and see how wonderful it is to go to church.

When Texas Monthly named Snow’s the best barbecue in Texas, I was so surprised. … I really thought I had a pretty good product, but I’m very self-conscious of everything. I was really surprised at it, and yet, I was very happy to think that they chose it as the best. It changed the business completely. In fact, they told us that day, “Your business will increase.” With that direction, we put a little bit more on the barbecue pits and put another case of brisket on. Well, needless to say, that first Saturday we were sold out before we even opened up. It all went so quickly, and people were in line waiting for it. It just kind of blew us all to the mountain. … [We thought,] once the “new” wears off, it’ll be back to the same old place. Well, that was in 2008, and here we are in 2022 and we’re still having long lines and people from all over the world.

I’m very proud of its success, but at the same time, I thank God for giving me the ability, body-wise, that at 87, I’m still able to go. I’m slowing down, I’ll admit to that. But I’m able to work. … I’m very honored and thankful to God that he gives me a good body, a strong body, and a clear mind.

In December 2015, I lost my husband. In March of 2016, I lost my son. And it’s a dark situation, but life has to continue after and find a way to keep going. … God closes doors, but he opens up a new one. And that’s what I looked at: God had opened these doors for me to go forward with barbecue. I’ve received so many awards and presentations and videos—whatever you might think of has been bestowed upon me, and I’m very blessed by continuing on God’s path. He’s leading me forward on this path.

“God closes doors, but he opens up a new one. And that’s what I looked at: God had opened these doors for me to go forward with barbecue.”

On a typical Saturday before COVID, I would get up at 1:30 and go to [Snow’s] and get there at 2 and put the meat on the fire and start the day with getting everything ready, adding more firewood and so forth. But since COVID, and probably the last year, I don’t get in now until 3:30 or 4. I’m finally beginning to notice that I’m getting old. I say, after all, how many people can still go at 87?

I also work in my school district’s grounds department because I work outside, and I really enjoy outside better than being inside. … There’s some manual work, but I really have an easy job—six, seven hours a day. I hope they let me stay on a while yet. I always say I enjoy being around people, and, therefore, I can show the love of God to people from the way I act or work or communicate with them.

I’m a Lutheran because I’m very happy with the services and the commitment to do God’s work. I just really enjoy the Lutheran church. My grandparents came from Germany, and the church they helped organize back in the 1800s, early 1900s, we always called it the German Methodist (church). But they spoke German, and I always felt like it was a type of Lutheran church. I just felt like they brought the Lutheran religion over from Germany.

I guess that’s one reason I really enjoy the Lutheran church … it reminds me so much of church when my grandparents were alive. I attended the German services at that time. The reason we quit there was that in 1942, with the war going on, some people in Lexington—[the church] had the double doors in the front—drilled a hole and put a chain through there and a lock to say, “No more German services.” And I can still see my grandmother—I was the age of 7—sitting there crying in the car because they could not go to worship anymore and had to find other churches. And that’s when we went over to the Baptist church.

Tomanetz’s episode of Chef’s Table: BBQ is available on Netflix.