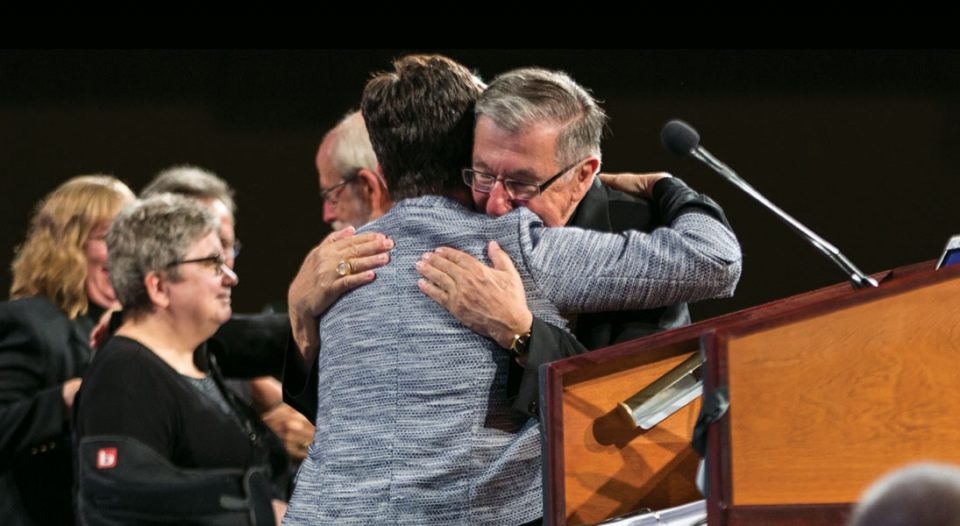 Denis J. Madden, auxiliary bishop of the Archdiocese of Baltimore and co-chair of the “Declaration on the Way” task force, shares an embrace with ELCA Presiding Bishop Elizabeth Eaton after the ecumenical document was adopted. The assembly stood to applaud the historic decision that outlines 32 “statements of agreement” between Lutherans and Catholics.

Embracing what many called a special moment in ecumenical history, the Churchwide Assembly endorsed a document listing 32 points of agreement with the Roman Catholic Church, declaring that some issues that once separated Lutherans from Roman Catholics were no longer considered divisive.

Approval of “Declaration on the Way: Church, Ministry, and Eucharist,” which was previously accepted by the ecumenical committee of the U.S. Conference of Catholic Bishops, came with applause and cheers as the assembly voted 931-9 to endorse agreements on such things as the definition of “church,” the ordained ministry, communion and the mission of the church.

Roman Catholic Bishop Denis Madden of the Archdiocese of Baltimore and co-chair of the group that culled 50 years of theological dialogues, said the agreements clearly pointed to a time when there could be approval of Lutherans and Roman Catholics sharing communion together.

Significant differences remain, but the declaration is “a unique moment in history,” said Mark S. Hanson, former ELCA presiding bishop and co-chair of the dialogue team.

When the ELCA presented Madden with a gift of a communion chalice to celebrate the agreement, he lifted it high and said, “I will wait for that day, not a long time in coming, I am sure, when we can share this chalice of the precious blood together. God has work for us to do as a body to bring Christ to the world. We can spread that word, we can share with joy those who know nothing of Jesus Christ.”

The areas of agreement were culled from all the dialogue reports to “ensure that we did not forget or retreat from what we had already agreed in the presence of the differences remaining between us,” Madden said.

The document expresses agreement that the “church on earth is gathered by the proclamation of the Gospel of God’s saving mercy in Christ,” and that it “lives from and is ruled by the Word of God, which it encounters in Christ.”

Among the agreements is that ordained ministers are essential for the church, but that all who are baptized “share in the priesthood of Christ.”

The declaration is also linked to preparations for the observance of the 500th anniversary of the Reformation, which Lutherans and Catholics worldwide are planning to commemorate jointly.