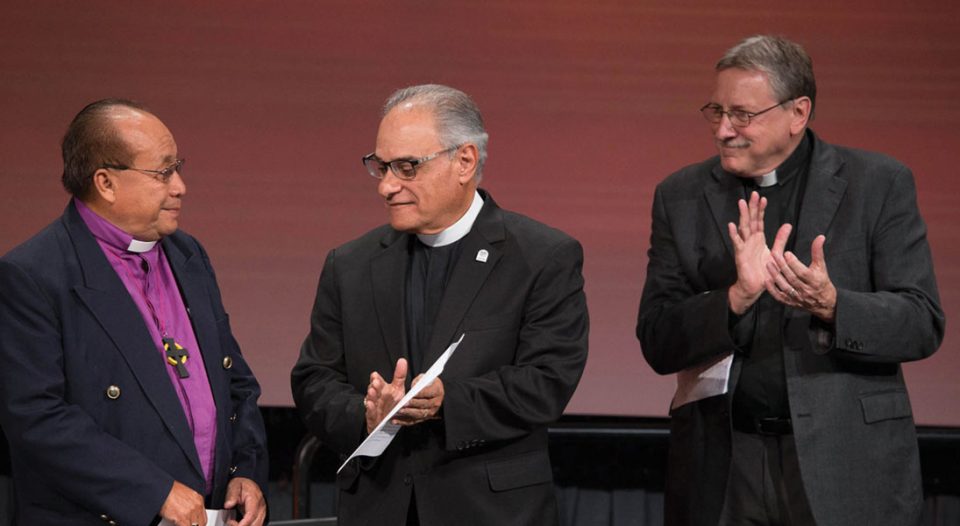 Amid an election season that has arguably been shaped in great part by immigration issues, the ELCA Churchwide Assembly made its voice known on the topic by approving (921-11) the Accompanying Migrant Minors with Protection, Advocacy, Representation and Opportunities (AMMPARO) strategy.

AMMPARO calls for bringing together the ELCA’s three expressions (congregations, synods and churchwide) to assist migrant children and families fleeing humanitarian crises in Honduras, El Salvador and Guatemala. Its acronym is derived from the word “amparo,” Spanish for refuge, shelter or, generally, protection.

Rafael Malpica Padilla, executive director of ELCA Global Mission, told the assembly that people have been leaving their countries due to violence, poverty and the effects of climate change since 2011. “In the past nine months, before July, the number of unaccompanied children has jumped 62 percent to 43,280 children. During that same period, families increased to 51,445 people. That is 105 percent more than 2015,” he said.

Stephen Bouman, executive director of ELCA Domestic Mission, said, “In this ungracious time in the public arena sometimes paralyzed by fear and anger and turning the back on the new neighbors among us, what a powerful public witness today, and a sign of hope for so many, that a church body would publicly offer refuge for all of us.”

During an earlier hearing on the strategy, Twyla Sandvick, a voting member from the La Crosse Area Synod, spoke in favor of the strategy: “I’m originally from Belize. This strategy is very near and dear to my heart. All my life I’ve heard the horrors of being an illegal immigrant, and this would be a beacon of hope for people who have no voices to advocate for them.”

AMMPARO will be a “holistic” response through four commitments: uphold and guarantee basic human rights and safety; address the root causes of migration in countries from Central America’s Northern Triangle and Mexico and the treatment of migrants in transit; work toward just and humane policies affecting migrants in and outside the U.S.; and work together as a church body with all to advocate for children and their families.

These commitments will be carried out in countries of origin, countries of transit and in the U.S. by three “guiding principles”: awareness building, accompaniment and advocacy. The ELCA will work on these commitments with Lutheran companion churches in the Northern Triangle, ecumenical partners, social ministry organizations and partners such as Lutheran Immigration and Refugee Service.

During floor discussion before the vote, many spoke in favor of AMMPARO, including Rachel Birkedal, North Carolina Synod: “Those who are in the process of migration or seeking asylum in our immigration court system need the community and the church to continue to tell them that they are human, that they are valued, that their lives have meaning and that we will not leave them alone in an immigration system that is almost impossible to navigate without support.”