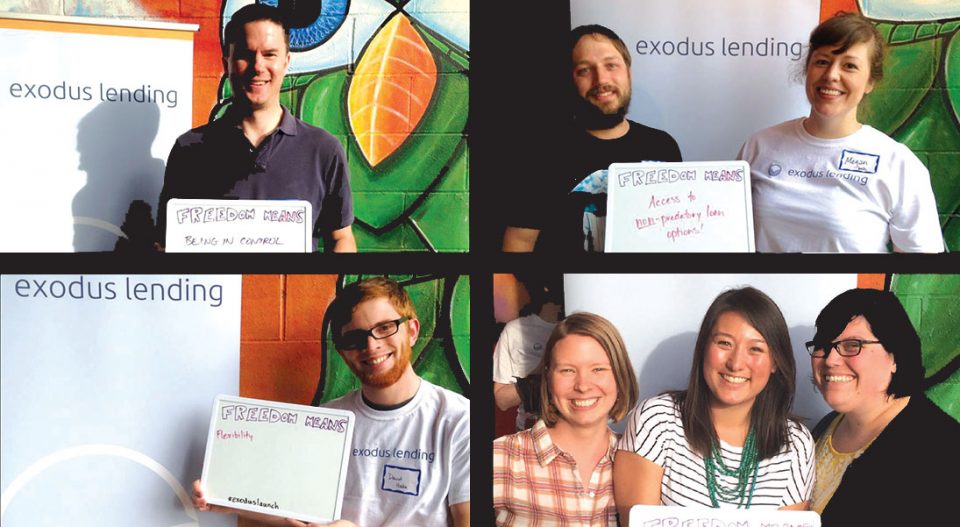 At the launch party for Exodus Lending in April 2015, members of Holy Trinity Lutheran, Minneapolis, showed up to support the congregation’s new organization by sharing what financial freedom means to them.

When a payday lender opened on the block of Holy Trinity Lutheran Church in Minneapolis in 2012, members had some questions.

“We noticed that more of these businesses were popping up, and we were concerned about their impact,” said Jay Carlson, pastor of Holy Trinity. “We did some research on payday lending and this business practice, and we found out the harmful effects and how it takes advantage of people in vulnerable situations. We knew we wanted to do something to respond to these needs.”

At first the congregation partnered with others in the community and dove into advocating for policy change in Minnesota. “In 2014 there was a valiant attempt to reform the payday lending industry in Minnesota that ultimately failed, but we are planning again for 2017 to revisit the issue,” said Meghan Olsen Biebighauser, parish outreach leader of Holy Trinity.

In the meantime, Carlson said the congregation wanted to assist people who were caught in the high-interest loans and need help right now, so in 2015 they started Exodus Lending. Its name inspired from the book of Exodus, which tells of God’s people moving from bondage into freedom, Exodus Lending is a not-for-profit organization that helps Minnesotans who are trapped in payday loans.

Exodus Lending pays off borrowers’ loans from payday lenders and ends their relationship with the “predatory lenders,” Biebighauser said. It then sets up a new 12-month payment plan with clients, allowing them to pay back their loan with zero interest.

“People want to pay back their loans, but when the fees and interest add up, it makes it almost impossible to dig out from under it,” Carlson said.

In addition to the loan process, Exodus Lending has a match program for clients who contribute to a savings account throughout the year. It also partners with Lutheran Social Service of Minnesota for clients to participate in financial counseling.

Exodus Lending recently named Sara Nelson-Pallmeyer as executive director, and so far the program seems to be successful. In its first year of operation, Exodus worked with 75 clients, refinanced 101 loans and saw a 96 percent repayment record. In April the organization celebrated with five clients who were among the first to graduate from the program.

Holy Trinity received initial funds to start Exodus Lending through a grant from Colonial, a United Church of Christ-affiliated congregation in nearby Edina, Minn. Since then Exodus has been sustained by many others, including parishioners, an ELCA Domestic Hunger grant and individual donors from the community. And as more clients complete the program, their money is also contributing to the sustainability of Exodus Lending.

“The 96 percent repayment is an incredibly high repayment rate,” Biebighauser said. “We attribute that a lot to the relationships that form with clients over the course of the year. There is a lot of trust that gets built in the relationships, and clients want to make sure that money is paid back and available for the next person who needs help getting out of debt.”

Corii Varner wishes there were more places like Exodus Lending. A client currently in the repayment program, she said Exodus has helped her a lot. “They took the strain off me needing to come up with the money immediately; they made me feel more settled,” she said. “Sometimes when you’re in debt you don’t want to share that type of thing because it makes you feel embarrassed, but people shouldn’t be afraid to talk about it or to ask for the help they need.”

Carlson echoes Varner’s thoughts: “Learning about this issue allowed us as a congregation to have conversations about money and finances among ourselves to understand the struggles people in our pews might have with debt.

“One important way every church can help end predatory lending practices is to talk more openly about debt. Through the ways we talk about money, each of us can help diminish the feelings of shame that people feel related to their personal finances and upon which predatory lenders rely.”

Exodus Lending and its supporters aren’t planning on slowing down their mission to reform payday lending anytime soon.

“Ideally, payday lending would be illegal and this type of usury would be banned,” Nelson-Pallmeyer said. “If and when the predatory landscape changes, we may be able to alter our specific loan product, but for now we’d love to offer more Minnesotans freedom from the usurious debt of payday lending.”

For more information, go to exoduslending.org.

What are payday loans?

Exodus Lending describes payday loans as small-dollar loans with extremely high interest rates that require the borrower to pay off the loan in full on their next payday.

Click here for a study guide related to this article.

Ending a cycle of debt

From hardship to freedom
Payday loans are unsecured, small-sum, short-term loans ostensibly designed to tide a borrower over until the next payday—hence the name. The problem? Many borrowers can’t pay them off in that short time span. So the debt rolls over—with high fees that make it even harder to pay off. If the loans keep rolling over, the sum can become nearly impossible to pay. How can congregations help?
Download Now