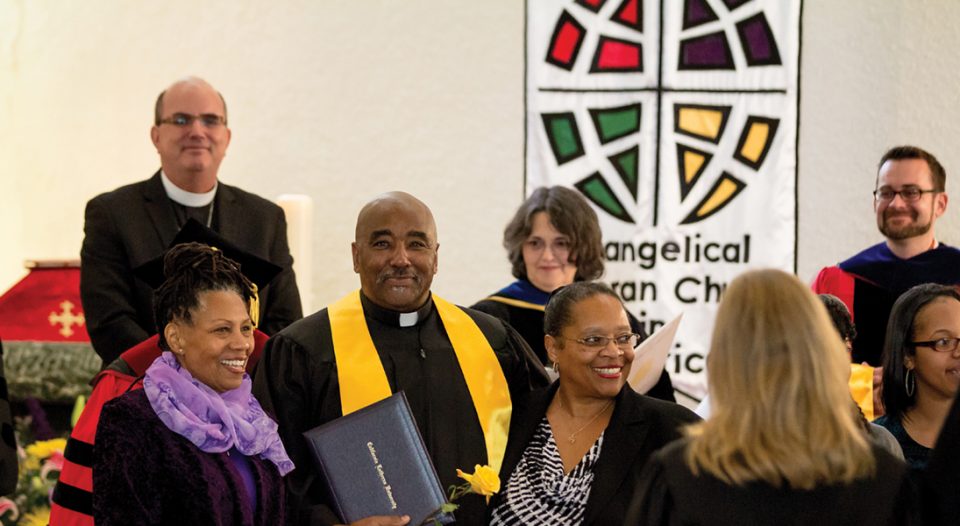 The ELCA is on pace to experience a major shortfall in full-time clergy. Parish pastors are retiring in record numbers, according to current data and projections from ELCA Research and Evaluation. This, coupled with decreased seminary enrollment, means there aren’t likely to be enough pastors for the number of open calls.

Jonathan Strandjord, ELCA program director for seminaries, calls it a “retirement tsunami,” stressing the shortfall isn’t a future problem. “It’s here,” he added. “We’re in the middle of it, and that clergy gap will continue to widen. In fact, the gap is wider than it has ever been.”

Most baby boomers entered ordained ministry as young as their 20s and as late as their 50s. This group composes the largest segment of ELCA pastors, many of whom are in their mid-50s now.

“We’re coming up on the peak of baby boomers reaching retirement age,” Strandjord said. “New pastors are entering seminary, but at nowhere near the needed replacement rate.”

Why the low rate of pastoral growth? Fewer children and grandchildren of boomers are interested in church membership, let alone ordination, said Gordon Straw, ELCA program director for lay schools for ministry. Data shows more people choose “none of the above” when asked for their religious affiliation, he noted. Researchers call these individuals “nones.”

Straw hones in on the “dones”: “It’s a growing category—65 million in the United States. These are people who have a deep understanding of their faith, but they’re leaving traditional congregations because they believe it doesn’t support them. They’re done.”

While the number of ELCA congregations that can afford a full-time minister has dropped steadily since 2005, there still aren’t enough pastors. In following the data, Research and Evaluation outlines myriad contributing factors in reports such as “The Supply and Demand for Clergy in the ELCA.” In short, the ELCA has fewer congregations, fewer members, fewer leaders and fewer financial resources.

More than half of ELCA congregations are located in sparsely populated, rural areas. Of those in medium-sized and larger cities or their suburbs, Research and Evaluation estimates as many as 450 can’t afford a full-time pastor.

Some of the need is addressed with part-time temporary staff from other congregations or retired pastors, Strandjord said, adding, “That is not an ideal, long-term solution.”

Between 2005 and 2014, Research and Evaluation observed an 11 percent decrease in ELCA congregations. This includes nearly 1,600 congregations and results from closures, consolidations and those that left the ELCA in response to the 2009 decision to ordain gay and lesbian people in committed relationships.

During the same time, the number of baptized members has dropped by 22 percent, with worship attendance falling almost a third.

The gap is responsive to the economy in other ways too, Strandjord said. Better pension plans and the advent of Medicare make retirement more realistic for today’s pastors. Meanwhile, economic crises like the Dotcom bubble and subprime mortgage crash create “pent up demand” to retire.

To increase seminary enrollment, he suggested congregations renew emphasis on encouraging ordained ministry and offering financial support. “A seminary education is not just a private good,” he said. “It’s not intellectual property I can leverage to make a buck; it’s something that benefits the common good. It’s a shared resource.”

Each ELCA seminary has continued to adapt to familial and economic needs, Strandjord said. Beyond bridging the clergy gap, he said creating a sustainable future for the church will require increased seminary support and emphasis on eliminating student debt.

“Yes, this is a real issue,” he said. “It’s also a real opportunity for people considering ministry.”

Straw agrees, saying the clergy gap may present the church with opportunities for innovation. “The ELCA has 3.7 million members. If you remove the ordained and lay professionals, you still have about 3.7 million members,” he said. “The resource and solution for the shortage lies in that membership.”

Lay leadership a must

Straw believes lay leaders can close the gap: “In some ways, it seems we may have gone back to this understanding that only professionals do ministry,” he said. “If the ELCA truly supports that, laypeople have to be part of the solution.”

TEEM was an appealing option presented to Steven Renner at an opportune time. “I have felt a calling to ministry since I was 8 years old,” he said. “Because I’m gay, I knew [ordained ministry] wasn’t going to happen.”

Instead he became director of customer service at the Kentucky Center for Performing Arts. He also has filled various leadership roles at Third Lutheran Church in Louisville, Ky., for more than a decade.

By 2009, Third was in need of a new pastor, and Renner was eligible for ordination in the ELCA. But he was at a point in his life where attending seminary full time wouldn’t be feasible or practical, with the closest school a three-hour drive.

Typically, congregations eligible as TEEM sites are plateauing or declining in membership. Many that implement this solution reverse those trends.  TEEM allowed Third to improve its finances by saving half a clergy salary for six years.

“If it wasn’t for the TEEM program, I wouldn’t have been able to become a pastor—not at my age or with my financial situation or my work situation,” said Renner, who was ordained and is now Third’s full-time pastor. “And the fact is [TEEM] let a congregation grow that might not otherwise have grown.”