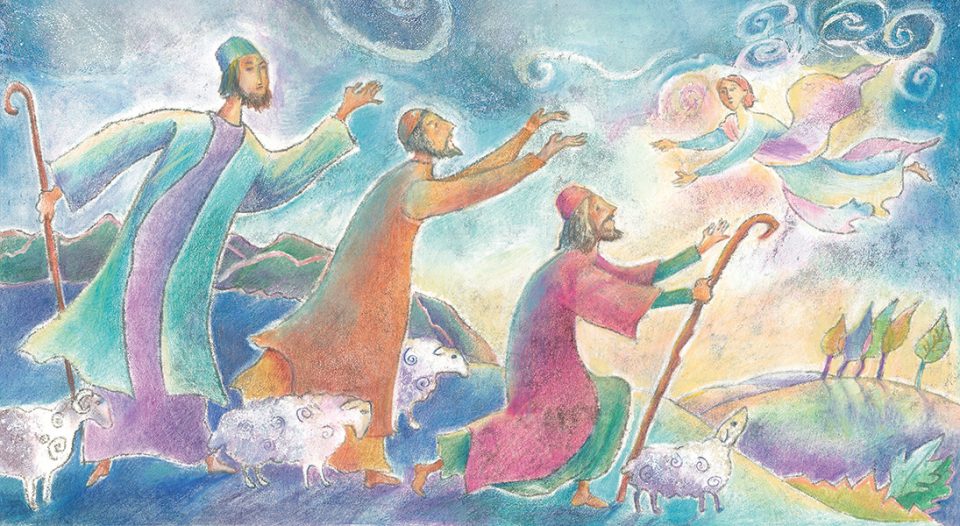 Between our house and the nearby middle school is a small stream. It flows under the road through a large culvert and empties into a small pool, rising and falling with the rain. I always stop and look into the pool on daily walks, shielding my eyes from the setting sun reflecting off the water.

I’m looking for fish. My wife says I’m crazy. On the way to the store the other day, she slowed down and called to me, a hunched figure on the side of the road squinting into the pool: “There’s no fish in that creek, you lovable nut job!”

But recently on a warm day after a rain shower, I peered into the pool and saw three small fish, each maybe 2 inches long. My wife says I’m lying. But that day they were there, in my pool: three small fish.

The story says they “lived in the fields,” keeping watch (Luke 2:8). I suspect that was some kind of life—actually living in fields, making your home there with an evening fire taking the place of your basic indoor Kenmore on a much wider range that seemed even bigger at night. They took care of the flock. That was their job, day in and out. They slept out on a hillside protecting fluffy fur for an absent owner. I doubt it paid a whole lot.

Some Bible scholars say that many shepherds were ex-cons who had spent time in jail—which is to say they lied professionally. They kept watch and developed an eye for odd movements and an ear for strange sounds. Some of the shepherds were probably pretty salty characters, old seasoned men prone to mild fabrication around a roaring fire. They watched over the flock with alert senses honed by suspicion born from experience. They kept watch. It was their whole life, this watching.

I’ve been a pastor for more than 30 years now and have met all kinds of interesting people in a variety of interesting settings—some with lots of faith and others with hardly any at all. It’s not my job to judge others based on the intensity of their faith, although some think it is (or should be).

One of my dearest friends is the most committed atheist you’ll ever hope to meet. His 40-year friendship has helped me realize that doubt and skepticism can be allies to faith. It’s sometimes hard to maintain faith in a world such as ours, but it’s also hard to maintain unbelief in anything at all.

It’s hard to explain away the existence of leopards and coyotes and trout and mitochondria and the color purple as purely accidental and random. Theists have their own set of befuddling challenges, but so do atheists.

They kept watch. Those three words are incredibly important for true believers and others who aren’t so sure. The life of faith is sort of like looking for fish where none are really expected. You won’t always get what you’re looking for. And you won’t always find the answer you’re seeking. But you keep watching, on tiptoe, ready for revelation.

The angels came to shepherds with their antennae up and senses sharpened. They were outside in a field, and they heard and saw some wonderful news: God’s promises taking on flesh and blood.

“The Word became flesh and lived among us.” The Greek word for “lived” in this verse literally means “to live in a tent.” One can paraphrase John 1:14 pretty closely by saying: “God became human and camped among us.” The word hearkens back to the ancient tabernacle (the portable abode for God) that accompanied the people of Israel wherever they went.

Christmas is the celebration of an ongoing camping trip where Jesus chooses to pitch his tent right next to ours. He drives in his stakes, kindles a little fire, strings up a hammock and lives among us. When we move, he moves—sharing our lot, our flesh, with his unfading glory.

The gift of incarnation, from an ecological perspective, is that God’s light fills our world. It’s the message Isaiah heard one morning from other angels in the temple at the time of his calling: “Holy, holy, holy is the Lord of hosts; the whole earth is full of his glory” (Isaiah 6:3).

“And suddenly there was with the angel a multitude of the heavenly host, praising God” and bringing peace (Luke 2:13). One striking word for me here is “suddenly.” They were keeping watch, like all other nights, and then suddenly.

There is a directional flow in Luke’s version of the Christmas story. There is a “back-and-forth” geographical ranging between heaven and earth. It was true when Jacob used a stone for a pillow on another night centuries before in another field—he saw a ladder of angels with traffic moving in both directions. And it’s true in the shepherds’ field. The angels were there and then they were not there, returning to heaven.

God’s glory does indeed fill this earth, but keen watchfulness might be the most important spiritual discipline for latter-day shepherds to develop in order to discern the traffic.

Author Annie Dillard said this about keeping watch while spending a year tromping around a creek near Roanoke, Va.: “Beauty and grace are performed whether or not we will or sense them. The least we can do is try to be there.”

I’ve not seen those three fish again since I saw them in that culvert pool. But I keep looking and watching every day—not because I know they’re really there, but maybe because watchfulness is even more important than verification in the life of faith. We live in the fields of a wonderful world. God reveals luminous truth and light, back-and-forth, up and down—angelic traffic. The least we can do is try to be there.