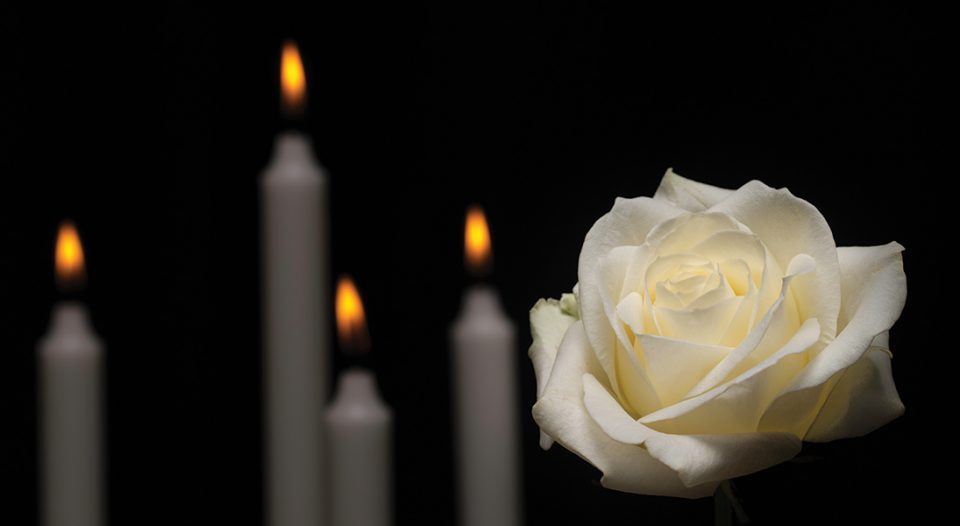 Editor’s note: The following article is based on a true event. Names and locations have been changed to protect privacy.

Take a deep breath, Angela. You can do this. Simply open the door and walk through it. You became a pastor in order to share God’s love with everyone, including bigots. Now reach beyond yourself and find grace. Find the grace that you have freely received and then give that grace to this grieving family.

How did it come to this, anyway?  Maybe my parents were right—maybe I should have gone to law school instead of seminary. Where’s the funeral director? I hope she introduces me to the family. Lord knows I need a buffer. Why didn’t Pastor Don just do this funeral like the family requested? Why did he have to be so ethical?

Four days earlier, Don had called. After we exchanged the usual pleasantries, the conversation became serious.

“Angela, the funeral home just called,” he said. “They asked if I could officiate a funeral for one of your members.”

“What?” I responded. “You mean a member of Trinity? Who?”

“Apparently he was baptized, confirmed and married at Trinity, but they moved away in the early ’80s,” Don said.

“Angela, I’m just going to tell you what the funeral director told me,” Don replied. “She said that ‘due to gender and racial issues’ the family would prefer that I do the funeral.”

It took a moment or two for his words to register. “You’re kidding me,” I said.

“Let me get this straight,” I said. “The man is dead, and the family is concerned with the race and gender of the pastor who’s doing the funeral service? He will stay dead, regardless of who buries him. This is ridiculous.”

“It sure is,” Don replied. “That’s why I refused to do the service. For one thing, I don’t even live in your community. You’re the called pastor at Trinity. He is a member of your church.”

He was right. I knew he was, at least on principle. Even still, I pleaded, “Don, come on. Doing that funeral is going to be like walking into the lions’ den with a pork chop around my neck!”

“I know. But I can’t,” he said. “It’s not right. If they want a Lutheran pastor, they need to go through you.”

I heard what he was saying. But I didn’t have the stomach for this. My parents already rode in the back of the bus and drank from “colored” drinking fountains so I wouldn’t have to. I didn’t want to be someplace where I was obviously not wanted. Why should I make myself vulnerable like that? Let them find somebody else.

“Angela, listen,” he continued. “God has called you. And God’s call on your life is greater than any injustice you will ever face. Being an African-American woman only serves to enhance your pastoral gifts, not detract from them. I know that’s easy for me to say. But you can do this.”

“Being an African-American woman only serves to enhance your pastoral gifts, not detract from them. I know that’s easy for me to say. But you can do this.”

Too much, too little, too late?

I know what to do. I’ll pray. Prayer always helps. “Dear God, please let the funeral home find another pastor. In Jesus’ name, amen.” There. That ought to do it.

Suddenly, the phone rang again. Sure enough, it was the funeral home. Thankful for the wondrous creation of caller ID, I took a deep breath and answered.

“Pastor Angela? This is Jennifer from Lanthom Funeral Home. You probably already heard through the Blue Hill grapevine that Robert Iverson has passed away.”

“Uh, oh, OK,” she replied. “Well, the family has decided to let all of those things go, and they would be happy to have you preside at the funeral.”

Doubtless, she couldn’t hear Johnny Mathis and Deniece Williams in my head singing “Too Much, Too Little, Too Late.” Resisting the urge to burst into song, I sought the honesty I had given her.

“Jennifer, what can you tell me about this family?” I asked.

“They were a prominent family in Blue Hill,” she said. “They founded Blue Hill Tool and Die. They employed a lot of families in our area. But he sold the business and moved away about 30 years ago.”

“Why the sudden change of heart about the funeral?” I asked.

“The family decided that it is most important for him to be buried by a Lutheran pastor,” she replied. “They would be honored if you would officiate.”

Honored schmonored, I thought. Nevertheless, we arranged the details of the service for that Monday.

“Tell me your favorite story about Robert”

Good, here comes Jennifer, I thought to myself when she arrived at the funeral home. She escorted me to meet the family and introduced me to the widow—a tiny, thin lady, elegantly dressed, complete with full makeup and jewelry. After our formal introductions, I wanted to talk with her.

“Edythe, I would love to hear about your husband,” I said. “Tell me your favorite story about Robert.”

Her eyes brightened. She smiled: “My favorite? It would be impossible to choose one. We were married for 58 years, you know?” She thought aloud as she pressed her slight index finger against her chin. “They’re all my favorites,” she added. “I guess if I had to choose one, it would be the time we saw the pyramids. ”

“Oh, yes, at least twice,” she said. “Bobby always did love Egypt. But then there was Paris. How could I ever forget Paris? Then, of course, Rome and St. Petersburg … .”

Mrs. Iverson shared with me, at length, stories of their global travels and summers and winters in their vacation homes. She was delightful. She really loved him. I fought a pang of jealousy that this man who was rather vocal about his disdain for people of color had lived so opulently. I pushed past the emerald veil of envy and imagined the heartbreak I would feel if I lost my husband.

“Pastor?” Jennifer placed her hand on my shoulder. “Sorry to interrupt. We will begin soon.”

I made my way to the pulpit. I sat until the organist finished her prelude. As the final chord of “Amazing Grace” lingered in the air, I thought to myself, God’s grace is amazing. Yes, Angela, you can do this.

Perspective: A bigger table in a divisive era