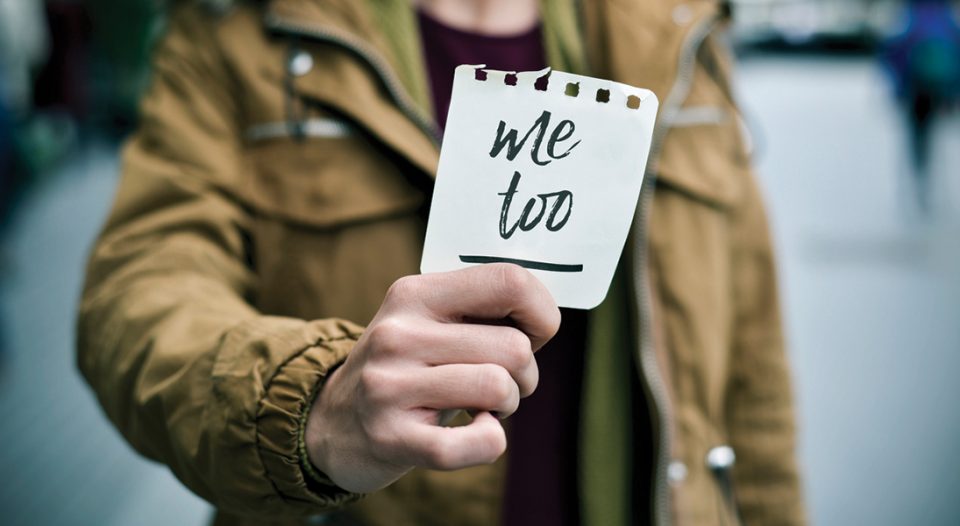 There is a tragic irony to having a national conversation about sexual misconduct during the feast of Advent. We are waiting for the coming of Jesus, an impossibility first witnessed by a teenage girl. We happily sing of Mary’s sweet assent to Gabriel’s offer and her powerful proclamation that God will tear down the mighty from their thrones. But many Christians carry on disbelieving and discounting the witness of today’s children and women.

The #MeToo campaign to elevate and connect voices of victims of sexual violence began in 2006. Activist Tarana Burke recognized that the shame, isolation and silence heaped upon these victims could be broken with the simple confession, one victim to another: “me too.” The phrase exploded in use this fall as one victim after another (predominantly women) began using social media to share stories of harassment and assault.

On Nov. 20, two Christian writers and organizers, Emily Joy and Hannah Paasch, expanded the #MeToo conversation with #ChurchToo. This hashtag is meant to bring to light the problem of sexual violence within the Christian church. It, too, went viral, as victim after victim shared experiences of sexual harassment and assault within God’s house and by God’s leaders.

We ignore the viral nature of #ChurchToo at our peril. The church is not only susceptible to the sin of sexual violence, but can even by its theology and practice be complicit in it. Theology that proclaims Jesus’ crucifixion as heroic redemptive suffering can too easily be corrupted to the lie that all suffering is redemptive, telling victims (sometimes explicitly) that their assault is “their cross to bear.” Promoting abstinence until marriage can tell a victim that their sexual assault has made them impure, untouchable and corrupt. Some leaders demand “Christian forgiveness,” in which the victim is made to accept a violator’s actions without amends, protection or time to properly heal.

We ignore the viral nature of #ChurchToo at our peril. The church is not only susceptible to the sin of sexual violence, but can even by its theology and practice be complicit in it.

Churches that actively silence women’s voices may silently be teaching that women are untrustworthy witnesses, making accusations of assault easy to deride as idle tales. None of these practices are inherently Christian. Rather, they are the poisonous result of patriarchal and hierarchical structures that seek to silence dissent and proclaim peace where there is no peace.

The violence of the actions revealed by #ChurchToo aren’t limited to a single leader or congregation. Mainline denominations, including the ELCA, are based on historical systems that assume male authority; bureaucratic processes are always in danger of preserving unity by silencing potentially disruptive allegations. When we prefer the work of silence, we endanger ourselves to violating victims a second time. When we refuse to cry out against sexual violence, we release the gospel to an easy co-option by evil, twisting (as did Alabama State Auditor Jim Zeigler) the story of the holy family into an affirmation of pedophilia.

Without clear action against sexual violence, the church continues to expose itself to abuse within its walls. Congregations can begin with clearly communicated child-protection policies and with training for all leaders—rostered, staff and volunteer—on boundaries, signs of domestic violence and sexual abuse, and predatory or “grooming” behaviors to watch for.

Churches must begin to have frank conversations about body autonomy and consent, both in biblical stories and in congregational practice. Advocating justice for sexual violence survivors can range from adult education forums to special offerings for a local domestic violence shelter. Finally, leaders, congregations and synods that actively silence victims and protect perpetrators must cease their complicity and begin the gospel work of liberating victims from abuse and trauma.

It happens close to home

On forgiveness and sex abuse