The Feb. 14 shooting at Marjory Stoneman Douglas High School in Parkland, Fla., that killed 17 students, faculty and staff, ignited a nationwide gun-control movement led by student survivors. The students will amplify their calls for gun control on March 24 through the March for Our Lives demonstrations they organized in Washington, D.C., and across the nation. ELCA youth and their parents will be among them. 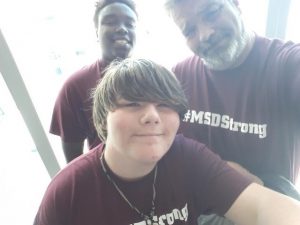 “I want to march so that our politicians can hear us and hopefully never let this happen again,” said Bruce Elkins, a 15-year-old student at Somerset Academy in Deerfield, Fla. “It doesn’t matter the age, religion or ethnic background—America needs to protect [its] kids. We are citizens of the United States too.”

Bruce and his father, Drew Shimkus, attend Zion Lutheran Christian Church in Deerfield Beach. Shimkus will accompany Bruce and his friend Jamal Jackson to Washington, D.C., to raise their voices at the march. Marjory Stoneman Douglas is about 10 miles from where Bruce attends school.

“As a dad, I want to stand and support my son; I want to be an ally to our children,” Shimkus said. “Tragedies like the one in Parkland have happened too many times. … I believe if you see something wrong, you have to have the courage to stand up and speak out. If no one speaks, how can change happen?” 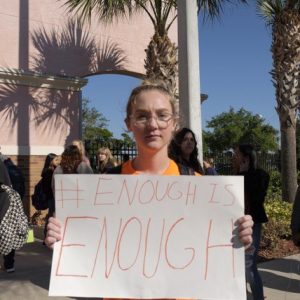 Mary Bernthal, a junior, wrote to the Vero Beach (Fla.) High School board detailing her thoughts on new school security measures. She wrote: “I implore you to at least dedicate some of your resources to pressure local, state and even federal representatives to take a harsher stance on gun control. The only thing that will truly eradicate this tragedy from ever happening again is to eradicate the use of the weapon that caused it.”

Mary, who attends Our Savior Lutheran Church (Vero Beach), read her letter during the National School Walkout at her school earlier this month.

“We all see ourselves in the victims, and we hear our own voices reflected in those of the activists speaking out,” said Emery, who attends St. Mark Lutheran Church in Dunedin, Fla. “Gun violence prevention to us means that all students get to go to school without being scared for their lives when there is a fire drill. It means that we do not have to wonder who can come onto campus and open fire on people we are in class with.

“Most importantly, it means that no more children will lose their lives while going to school.”

Members of We the Students in Pinellas County, Fla. Photo: Courtesy of Emery Horvath

Emery and We the Students are organizing the March for Our Lives event in St. Petersburg, Fla. Emery will be speaking before the march begins.

Inspired by a fire drill during second period, during which he and other students looked at each other wondering, “Is it real?,” 14-year-old freshman Jonathan Weinrich started SAVE Promise at Seabreeze High School in Daytona Beach, Fla. The club “stands against violence, not limited to just guns.” Jonathan said the club is inspired from a nonprofit organization started in the wake of Sandy Hook.

“I am currently reaching out to kids all around Daytona Beach to go to the [March for Our Lives],” said Jonathan, who attends Trinity Lutheran Church in Smyrna, Fla.

Originally from Land O’ Lakes, Fla., Courtney Noya, a senior at Florida Atlantic University’s Harriet L. Wilkes Honor College, participated in the National School Walkout on March 14 and will attend the March for Our Lives event in West Palm Beach on Saturday.

“Because my school is located not too far from Parkland, the tragedy there hit home for some of our students. Many of them had friends or siblings who were at the school during the shooting and, unfortunately, some of them knew students and adults who died,” said Courtney, whose home congregation is All Saints Lutheran Church, Lutz, Fla. “My campus is a small, close-knit community, so we wanted to show our support for not only our own students but students everywhere.

“The March for Our Lives is not just about Parkland High School, and it’s not just about Sandy Hook Elementary School or the other various locations that have to live with the trauma created in their communities. It is about giving a voice to youth who are educated and demanding change. It is about the fact that we have an upcoming generation who refuses to let bygones be bygones when it comes to our lives when there is so much that can be done to make our society safer. It is about the fact that children dying in schools, in part due to failing gun laws, is not acceptable.”

Tom Hoegel, youth director at Bethel Lutheran in Cupertino, Calif., supports youth in his congregation and around the country who are speaking out after Parkland. “Working in youth ministry for over 40 years now, I am consistently inspired and challenged by the voices of youth, and I have always considered [it] an honor to walk in the sacred places alongside young people,” he said. “The past month has given me great hope in the power of teens to transform our culture related to guns and mental health.

“I was privileged to stand with the high school students across the street from my church on March 14 and am looking forward to taking a couple dozen youth and adults to downtown San Jose (Calif.) this coming Saturday to March for Our Lives.”

His support is echoed in the ELCA’s leadership. Following the Feb. 14 shooting, ELCA Presiding Bishop Elizabeth Eaton issued a pastoral message lamenting the shooting and charging this church to examine how it is “cultivating a culture of violence, hatred, anger and fear,” and to ask, “How can we participate in building a counterculture where people can experience God’s intended peace?”

On March 6, the ELCA Conference of Bishops released an official statement in response to the tragedy, which offered its “support, partnership and prayers for the March for Our Lives, its satellite city events, and our children and youth who are leading us forward as peacemakers.”

To find one of the 839 (and counting) worldwide March For Our Lives events near you, click here.

Susan B. Barnes
Barnes is a Tampa, Fla.-based freelance writer.

‘And yet … the shootings go on’

Perspective: On prayers for Las Vegas—and for the U.S.