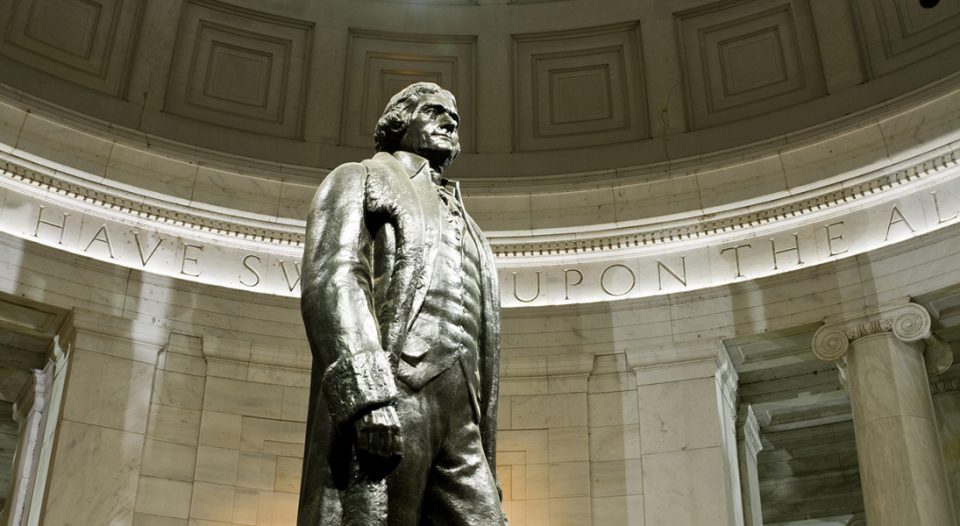 Statue of Thomas Jefferson inside memorial in Washington, D.C.

Editor’s note: This entry is the second of a multipart series on white fragility. Read the introduction here. Every other Tuesday through mid-May, look for new posts from Martin Zimmann on this topic.

As we continue reading about systemic racism in America, the students in my class are recognizing moments in their lives and our culture where privilege is present yet masked in the guise of normalcy. We are acknowledging that a series of deliberate actions were taken (incentivized by economic gain) to create a world in which white privilege could flourish. In fact, many would call themselves blessed by God as self-identified white people. Many still do.

Most of us were unaware of the Three-Fifths clause still present in our country’s constitution dictating that a slave is worth three-fifths of a person. Everyone has heard of the Jim Crow laws that created segregation, yet few are aware of the preceding Black Codes that created a brutal reality for people of color after the 13th Amendment was voted through Congress.

These historical documents were topics of discussion for my class, but they were secondary to the main event of our discourse—the mythologized greatness of Thomas Jefferson.

I shared a theory about him with the students: Jefferson is a litmus test for white fragility. For some reason, his association with slavery has been fraught with controversy. This theory posits that when the relationship between Jefferson and Sally Hemings is the topic of discussion, people react in one of three ways:

Jesus tells us that in knowing the truth, it will set us free. The truth is that Jefferson was a career slave owner.

We then discussed the following account of Jefferson’s life, which comes from The World That Made New Orleans by historian Ned Sublette.

Jefferson owned hundreds of slaves on 11 farms throughout Virginia. His writings concluded that slavery was good for Africans because they were a subhuman race akin to orangutans. My students remarked that they were never taught in high school about the vast reach of Jefferson’s slave holdings.

Jefferson was married to Martha Wayles, whose father was also a slave owner. She was pregnant seven times, but only two of their children survived. She died giving birth to her seventh child. Shortly thereafter her father died, leaving behind 135 slaves and tremendous debt, which Jefferson inherited. Among those slaves was a girl named Sally Hemings, Martha’s half-sister. Since Hemings’ mother was a half-white house slave, this relationship was never acknowledged—such was the law of the Virginia colony. Hemings accompanied Jefferson to France for an extended visit with the Marquis de Lafayette. Upon returning, she discovered she was pregnant by her master. She was 16. He was 45.

Jefferson and Hemings would eventually have six children together. Historians have debated the nature of this relationship for decades, but most agree on it today. Sublette writes:

The question the Jefferson/Hemings story brings up is not whether he fathered her children, but why did American historians kick and scream so hard for so long that this couldn’t possibly be true? Of course it could be true. Whether Jefferson exercised his option or not, he could have sex with Sally Hemings whenever he wanted. The matter of her consent was irrelevant, because she could not refuse. Because that’s what slavery was.”

I remember the moment after I finished sharing this information with the class. There was a pause, as if somehow we’d violated a sacred premise of our national story.

Popular U.S. history glosses over the brutality of colonization and slavery with romanticized images of pilgrims sharing a friendly feast with curious Native Americans and happy African-Americans working on a plantation. This type of national nostalgia negates the gospel imperative of peace with justice and reconciliation between people.

We then discussed the ramifications of knowing the inconvenient, ugly truth of our national history. In our congregational lives, we seldom touch on the uncomfortable moments in our sermons or Sunday school classes because it makes people uneasy or even angry—typical signs of white fragility.

We also acknowledged that before sharing these truths in a congregational context, a healthy relationship of mutual trust and transparency must exist between rostered ministers and their parishioners.

We agreed that race is not a topic into which we dive during our first month in a new ministry setting. One of my students, a bishop’s assistant in an urban synod, related how even now attempts to celebrate relative diversity among congregations is met with halfhearted enthusiasm and truculence from all parishioners. The wound of racism is deep, and still in need of healing.

The Jefferson litmus test can be applied to any ministry setting. The response of parishioners to this particular inconvenient counter-narrative speaks volumes about the levels of white fragility in our midst. The truth hurts, but it does set us free.