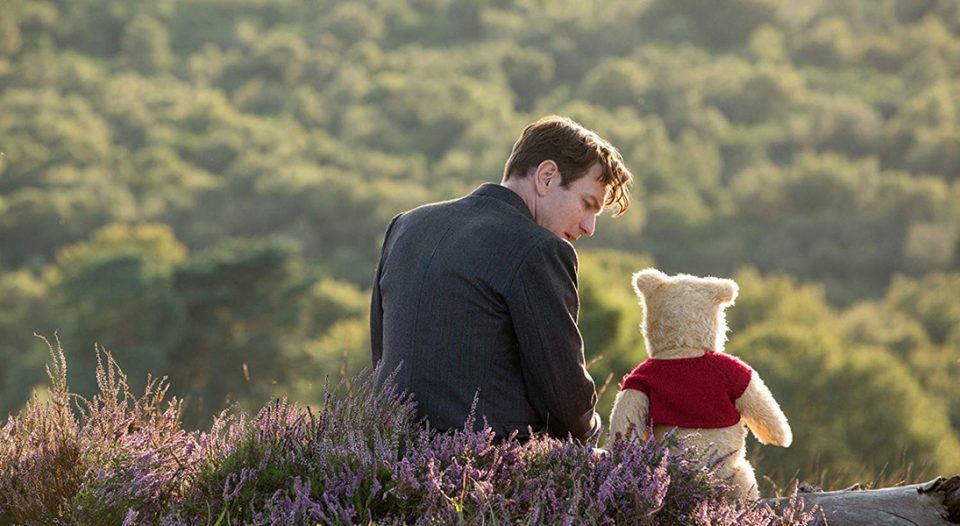 In the first 15 minutes of the new film Christopher Robin, the title character does the following: decides he’s too old to continue playing with Winnie the Pooh and his other friends in the Hundred Acre Woods, attends a boarding school, loses his father, fights in World War I, gets married, has a daughter and takes an executive job with a luggage manufacturing company.

That’s a lot of development in a short amount of screen time, but the packed plot advances the movie’s theme. “Nothing comes from nothing,” the adult Christopher Robin (Ewan McGregor) claims, justifying the workaholic tendencies that drive him to ignore his wife and daughter. When he chooses a weekend at the office over a family trip to the countryside, it takes a visit from Pooh Bear (in the form of an impressively computer-animated stuffed animal, performed by veteran voice actor Jim Cummings) to teach him the film’s central lesson: “Sometimes, the very best somethings come from doing nothing!”

More than an adorable recreation of the absurdist logic author A.A. Milne packed into his original Winnie-the-Pooh books, the statement makes a moral declaration. Not only does Christopher Robin get his priorities straight when he finally tosses aside work to do nothing but play with both his old friends Pooh, Piglet and Tigger and his daughter, Madeline (Bronte Carmichael), but he also solves the professional problems caused by his buffoonish boss (Mark Gatiss). As soon as he realizes that his life consists of more than just making money, Christopher Robin finds true joy in those who love him, and the things that seemed so daunting aren’t as important anymore.

For many viewers, the plot mechanics of Christopher Robin, directed by Marc Forster, will be fine for a heartwarming Disney flick but appear to have no relevance to real life. Everyone wants to spend time with family and friends, but those things cost money, and you can’t get money if you don’t do the work. That’s just the way of the world.

Such thinking might be reasonable, but it can lead us to overlook the most ignored of the Ten Commandments: “Remember the sabbath day, and keep it holy” (Exodus 20:8).

We all like the idea of devoting a day to rest, but we often treat it as unrealistic as advice from a living stuffed bear.

We all like the idea of devoting a day to rest, but we often treat it as unrealistic as advice from a living stuffed bear. When we get too busy, we’re quick to blow off the commandment as antiquated, covering ourselves by quoting Mark 2:27: “The sabbath was made for humankind, and not humankind for the sabbath.”

But doing so misreads Jesus’ lesson in that passage: We need the sabbath just like we need food, in part because it protects us from the machinery of production and consumption. As theologian Walter Brueggemann writes in his book Sabbath as Resistance, the Fourth Commandment is “the most difficult and most urgent of the commandments in our society, because it summons us to intent and conduct that defies the most elemental requirements of a commodity-propelled society that specializes in control and entertainment, bread and circuses … along with anxiety and violence.”

In other words, sabbath disrupts societies like ancient Egypt and modern America, those built on “endless desire, endless productivity, and endless restlessness,” according to Brueggemann. By taking rest, he argues, we enact faith not in our abilities, employers or market forces but in God’s sovereignty. Sabbath observance is “not an idea but a practical act, an act of submission to the restful God of commandments one, two, and three.”

So while Christopher Robin might seem like a frivolous way to pass the time, it reminds us that letting time pass is rarely frivolous. Sometimes, it’s a mighty act of faith.