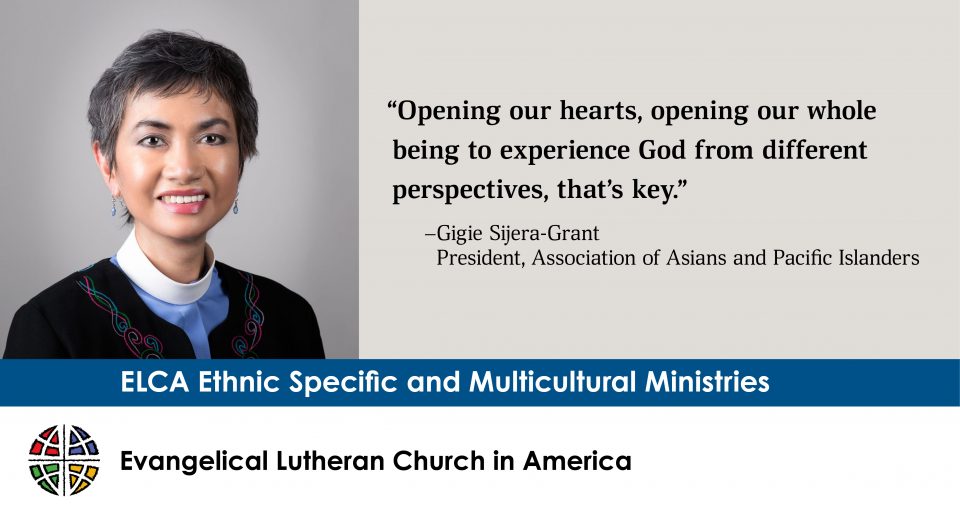 Passion drives the work of Gigie Sijera-Grant, a pastor of First Evangelical Lutheran Church in Ellicott City, Md., and the president of the ELCA Association of Asians and Pacific Islanders. “I have a passion for a multicultural ministry, the association and working with other ELCA ethnic associations. It comes from a passion for connecting with people from different ethnic traditions,” said Sijera-Grant, who is committed to helping build an inclusive, multicultural ELCA.

“Opening our hearts, opening our whole being to experience God from different perspectives, that’s key.”

The association includes 20,000 diverse Asian and Pacific-Islander Lutherans. It has 12 ministry caucuses, including Cambodian, Indian, Chinese, Indonesian, Korean and others, said Sijera-Grant, who immigrated to the United States from the Philippines.

The association’s goals include expressing the Christian faith from Asian-Pacific American perspectives and strengthening the unity of its communities in the ELCA, she shared.

Another goal: “Listen to each other’s stories and common struggles and learn from each other,” she said.

In April, for the first time the association held its biannual assembly jointly with another ELCA ethnic association, the European Descent Lutheran Association for Racial Justice. When asked if the Asian and Pacific Islander association would consider planning a joint assembly, “we thought this would be a great idea,” Sijera-Grant said. “It was the largest assembly we’ve ever had. People from both associations sat together, got to know each other and worshiped together. They attended some of our sessions.”

“Listen to each other’s stories and common struggles and learn from each other.”

The Asian and Pacific Islander association holds an international conference in Asia every other year. At next year’s conference, a young adult group will build a 1,200-square-foot community hall for a local congregation in Thailand, she said.

Asian and Pacific-Islander ministries in the United States and internationally are currently working to address issues related to immigration barriers, refugee struggles, poverty and human trafficking.

But one of the primary internal challenges the association’s members face is being called to ministry within the ELCA. “To be an ELCA pastor, they have to know Lutheran theology,” Sijera-Grant said. “There is no one Asian theology because there are many of us with many different perspectives.”

She stressed the importance of creating a church environment that instills a sense of belonging and an acceptance of other ways of doing things. If the church “wants to make room for us, they have to expand their Lutheran theology to include ours as well,” she said.

“We’re used to having everything planned,” Sijera-Grant said of First. “At Beloved Community, there are always parts of the service that are left open. There’s a sharing of stories and talents. People come in their ethnic attire. It’s neat to see.”

Sijera-Grant, who has worn traditional Filipino clothing for Beloved Community services, enjoys seeing worshipers sing in their native languages and play native instruments. “Prayers can be done in different languages, and parts of the worship don’t have to be in English,” she said. “God gave us all these gifts to share with each other. Sharing traditions expands the way we see God.”