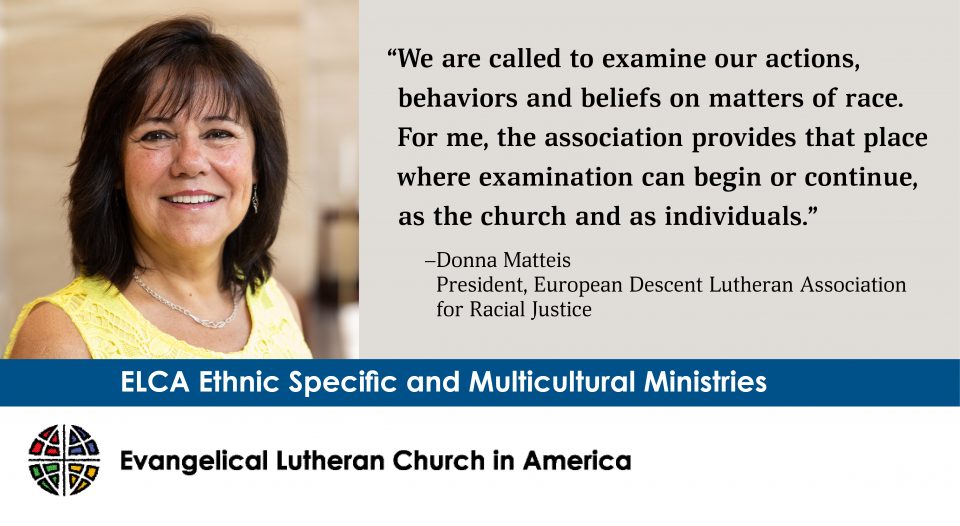 Passionate and committed, that’s how Donna Matteis, the new president of the ELCA European Descent Lutheran Association for Racial Justice, describes her work to combat racism and challenge white privilege in and outside of the ELCA.

“I firmly believe it’s past time for white Christians to engage in anti-racism work and challenge white privilege in all forms inside the church and society,” Matteis said.

Among her priorities will be continuing to reach out to encourage dialogue about systemic racism and white privilege. While she’s aware there are committed people in the ELCA engaged very strongly in anti-racist work, “I know there are areas within the larger church that don’t have task forces or specific interests,” she said. “It is important that these conversations take place across the board—at churchwide, in the synods and congregations.”

Matteis has worked with the African Descent Lutheran Association to help review the ELCA’s constitutions and bylaws for language, or absence of language, that adversely impacts people of color, she said. Continuing to work as allies with ethnic specific ministries as they do their work will remain a priority, as will collaborating with others in synods, congregations and the churchwide organization on their efforts “toward becoming a nonracist, inclusive and multicultural church,” she said.

Among the association’s recent initiatives was providing training to faculty of Luther Seminary, St. Paul, Minn., on systemic white privilege. The association is looking to train more people across the ELCA, said Russell Meyer, association vice president and most recent former president.

“It’s important for us to examine our church structure, polices, practices and procedures and ask why the church has remained over 95 percent white.”

The training is designed “to help people talk about these issues of what does racism mean, what does white privilege mean,” Matteis said. “Those terms are sometimes lightning rods. This training helps explain what they are, so people understand by talking about them that we’re not calling people racists. We are talking about systemic racism, systemic white privilege” and its impact.

Matteis, a Chicago resident, attended the Ecumenical Theological Seminary in Detroit and holds a master’s degree in pastoral ministry. She is currently enrolled in a Drew University, Madison, N.J., doctoral program, as well as a program examining political Christian ethics and how those ethics call people of faith to combat racism and white privilege.

“It’s important for us to examine our church structure, polices, practices and procedures and ask why the church has remained over 95 percent white. We are called as individuals to examine our actions, behaviors and beliefs on matters of race and racism and, for me, [the association] provides that place where examination can begin or continue, as the church and as individuals.”