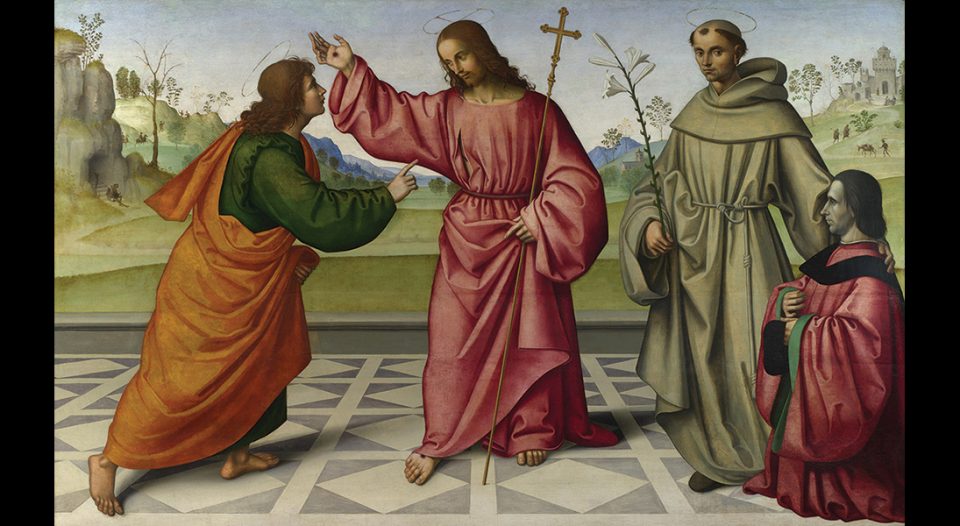 The Incredulity of Saint Thomas by Giovanni Battista da Faenza

Each year on the Sunday following Easter, we hear in our Gospel lesson the story of Thomas, “the Twin.” He’s been stuck with the nickname “Doubting Thomas,” yet the point of his story is that he comes to believe after seeing exactly what his friends saw. Maybe that’s just how we read these stories (the prodigal son could no doubt relate). Maybe we’re more interested in a dilemma than in its resolution.

People are definitely interested in Thomas. We identify with him, and I suspect that’s what John, the Gospel writer, wanted. Whereas the other disciples see Jesus on the day of his resurrection, Thomas misses out. If he is to believe that Jesus is alive, he’ll have to take his friends’ word for it.

Thomas doesn’t just express doubts. He says that, unless he thrusts his finger into the mark of Jesus’ hand and his hand into the wound in Jesus’ side, he will not believe (John 20:25). We, the people who hear the Gospel, are in the same boat. We have to take someone else’s word. We, too, might be inclined to demand some kind of proof.

That’s Thomas: not the doubter who believed, but the traumatized believer who stuck around to have his faith restored.

But after years of studying and preaching and living with this story, some of us wonder if Thomas is really such a hard-nosed skeptic. When Jesus appears to his disciples again, Thomas is there in the locked room with the others. He hasn’t given up on the community into which Jesus called him. He’s probably eating and praying with them.

When Jesus offers to fulfill Thomas’ revolting and sacrilegious demand—here, put your hand in my side—Thomas doesn’t take the invitation or tell his friends they were right after all. Instead he exclaims, “My Lord and my God!” (20:28). This tells us that Thomas never truly wavered in his faith. He is angry and grief-stricken more than doubtful.

“I’ll believe it when I see it” is a modern proverb, but that’s not really how belief works. We see only a little slice of the world and fill in the rest based on what we expect, what we already know (or think we know) and what we want to or already believe.

That’s Thomas: not the doubter who believed, but the traumatized believer who stuck around to have his faith restored. He wanted to see Jesus, he hoped to see Jesus—he may even, in some strange way, have expected to see Jesus—and so he did. That’s faith.

Benjamin J. Dueholm
Dueholm is a pastor of Messiah Lutheran Church in Wauconda, Ill. His book Sacred Signposts: Words, Water, and Other Acts of Resistance was released in July 2018.

Lectionary blog: The gospel of sharing