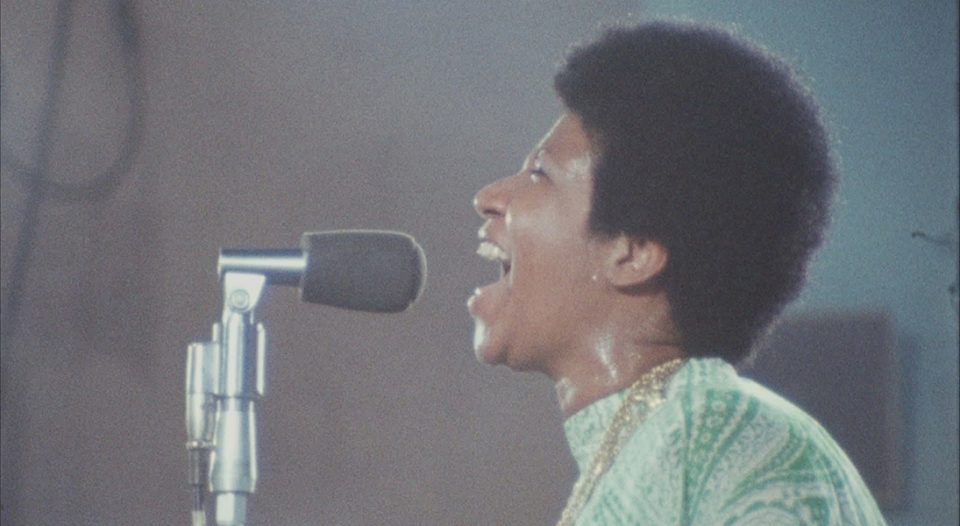 Aretha Franklin could make people cry with her voice.

In the concert documentary Amazing Grace—filmed by director Sydney Pollack in Los Angeles over two January nights in 1972 and finally released this year—the most moving moments reveal the effects of Franklin’s singing on people. A young man in her backing choir, the Southern California Community Choir, fights away tears before leaping to his feet to cheer her on. During a long, meditative rendition of “Never Grow Old,” Franklin’s mentor, Clara Ward, weeps and rises in exultation. At one point, gospel legend James Cleveland, Franklin’s family friend and the evening’s emcee, leaves the piano bench to bury his head in his hands.

Amid this outpouring, the band never misses a beat. At one point in their partnership, Franklin had warned bassist Chuck Rainey, “Chuck, don’t listen to me sing.” She knew her voice could drive people to distraction.

Introducing the song “Amazing Grace” the first night, Cleveland claimed it made Franklin herself tear up during rehearsal, specifically the line that begins, “Through many dangers ….” Cleveland continued: “Never did we think, 20 years ago, that God would do great things for us.” This is the film’s most overt reference to the civil rights movement, in which Franklin played a meaningful role. (Four years earlier, she’d sung “Precious Lord, Take My Hand” at Martin Luther King Jr.’s funeral.) In her thrilling performances of gospel standards, her audience saw, and felt, God’s redemptive promises come to life.

Franklin kept her composure throughout the Amazing Grace concerts, held at New Temple Missionary Baptist Church. After all, making people cry was part of her day job. Her God-given vocation was to sing popular music, a job she did as well as anyone in the world. The year prior, she scored three Top 10 hits, following a string of iconic singles (“Respect,” “Chain of Fools”) in the late 1960s. She was revered by other musicians, including members of the Rolling Stones, who attended the second night’s performance. And she knew how to lead a band. The movie’s only bit of rehearsal footage depicts Franklin stopping the instrumentalists, firmly and quietly, to make sure they played the intro to “How I Got Over” in its proper key.

When she testifies to all that Jesus has done for her, the audience experiences that grace as an overwhelming presence.

Besides some remarks from Cleveland and C.L. Franklin, Aretha’s beloved father and an American Baptist minister, the movie focuses squarely on those performances. There are no “talking heads,” and only a brief, printed preface of explanation. Sometimes we see Pollack and his crew at work, pointing directions at one another across the sanctuary, but mostly we see the musicians: the band, the silver-sequined choir, Cleveland pounding the piano and, of course, Franklin, often in close-up shots that savor every bead of perspiration on her face.

Especially welcome are the shots of Alexander Hamilton, Cleveland’s lanky assistant director, leading the choir through the precise, crisply enunciated five-part harmonies his boss favored. Hamilton, perpetually in motion, brings to life the nuances of his original choral arrangements. Whenever he points cues at the choir or mouths reminders to them, we’re reminded that Franklin wasn’t the only one working hard those two nights.

Were these performances merely work for them or worship? Or some combination of the two? It’s a church musician’s eternal conundrum. But in Amazing Grace, it scarcely matters. When Franklin reaches the ebullient high notes of “Mary, Don’t You Weep” and “How I Got Over,” her voice soars, seemingly untethered from her physical vocal apparatus and the earth itself. She makes these notes sound both powerful and impossibly easy.

When she testifies to all that Jesus has done for her, the audience, gripped by every word, experiences that grace as an overwhelming presence. In those moments when we glimpse the unfathomable extent of her talent, Franklin’s voice embodies God’s abundance.