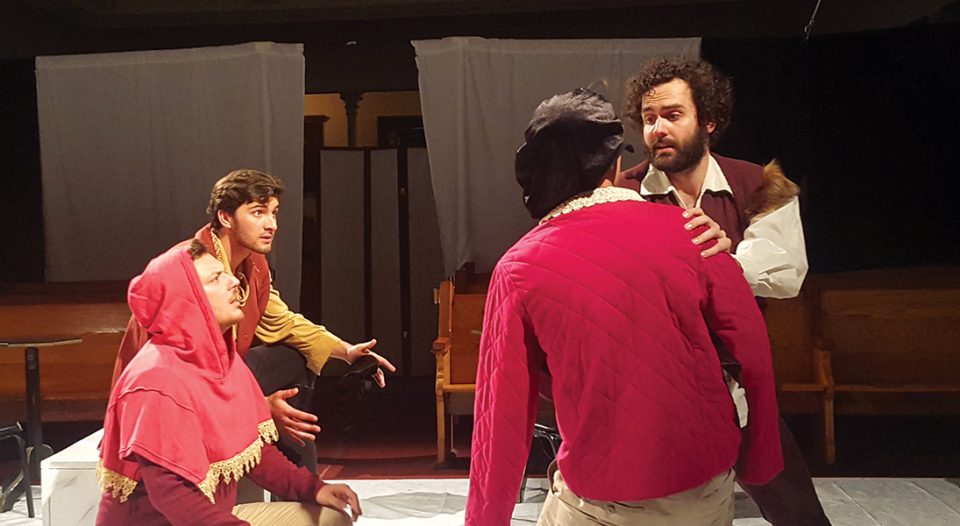 Mark Erson’s play Marc in Venice is performed at St. John Lutheran Church, New York City, where Erson serves as pastor and director of the Theatre at St. John’s.

Mark Erson’s complex and innovative ministry can best be understood by a single photo he took in Edinburgh, Scotland, during a visit to the city’s famed artistic Festival Fringe. It’s of a poster featuring the iconic drama masks hanging on a lamppost in the foreground while a church steeple behind it reaches skyward.

Beginning in high school, Erson felt the pull to combine performing arts with his Lutheran faith, a drive that led to his current call as pastor of St. John Lutheran Church, New York City, where he also serves as director of its theater ministry.

Theatre at St. John’s runs a full season of productions in cooperation with several area companies. This season, Erson developed the theme “Stonewall 50: Rebels, Revolutionaries, and Rowdies.” The plays honor the 50th anniversary of the riots held at the Stonewall Inn—located a few blocks from St. John—considered a key moment in the modern LGBTQA+ rights movement.

The season began in February with an all-female Romeo and Juliet and is scheduled to end in October with Marc in Venice, which Erson wrote and will direct. Set in three different centuries and depicting three men who share a name and search for personal truth, Marc in Venice won a 2018 Carlo Annoni Prize for playwriting, which recognizes LGBTQA+-themed plays.

Erson didn’t plan Theatre at St. John’s as a showcase for his acting and writing. Instead, he developed it as a way to connect more fully with the congregation’s West Village neighborhood. He believes theater and worship fit together well—if done well.

“I went to college at Gustavus [Adolphus College] in Minnesota, and we did a piece written by one of the professors, and the professor said, ‘The thing about religious theater is it’s either bad religion or bad theater,’ ” Erson said. “I picked up that torch. I thought we should have excellence both in theologically what we say and how we say
it theatrically.”

Erson, whose father was a pastor, kept that thought while he was working as a lay professional at a Philadelphia area congregation and when he taught at a performing arts school in Los Angeles.

“Somebody said to me when I was going to seminary, ‘How do you feel about leaving theater behind?’ And I said, ‘I’m not.’ And the funny thing is that, as an ordained pastor, I am actually having more opportunities to engage the theater side of me,” he said.

When Erson arrived at St. John in 2011, membership had dwindled, and the concept of having theater in the space (which had previously existed) was, for the most part, dormant. “So I started inviting theater companies,” he said. “Now we’ve got about five resident companies that share the space. And this year I challenged all the companies to focus on the Stonewall legacy.”

“I tell people this is an exciting time to be church, because we have this wonderful, robust message of living out the reality of the tensions in life and living out the radical welcome that Jesus practiced.”

While Erson is open to a variety of shows each season, he strives to have them fit within a general Lutheran mission.

“The stories that are being told here are certainly life-affirming and celebrate the creative spirit that, to me, is part of the image of God in us,” he said. “I don’t mind challenging institutions of religion, but certainly anything that would be completely contrary to the theological tenets of our faith, I would take issue with, and this would not be the right place for that.”

Any congregation interested in doing a similar ministry can consciously choose what they feel is appropriate, he added, but debating those decisions shouldn’t discourage them from developing creative ways to share their faith.

Financially, Theatre at St. John’s provides rehearsal space and splits the box office with the companies, which can be a good deal for a group without a permanent home, given the city’s high rent prices. It’s an arrangement that works well for longtime actor and director Everett Quinton, a member of Grace & St. Paul Lutheran Church in New York City. Quinton is directing Galas, running this month as part of the Stonewall 50 season.

Quinton said he used to think of St. John as “the church that was closed,” because, other than during services, the gates appeared to be locked and uninviting. “But ever since Mark got there, it’s like the place is alive,” he said. “There are so many groups there. Sometimes it’s annoying when you’re rehearsing and some group walks through, but then you remember how it feels like a vibrant home now. It’s part of the community.”

For Erson, 2019 is a meaningful year to both remember Stonewall and recognize and celebrate the 10th anniversary of the ELCA Churchwide Assembly resolution to roster LGBTQA+ clergy.

“I tell people this is an exciting time to be church, because … we have this wonderful, robust message of living out the reality of the tensions in life and living out the radical welcome that Jesus practiced,” Erson said.

A doorway to the sacred