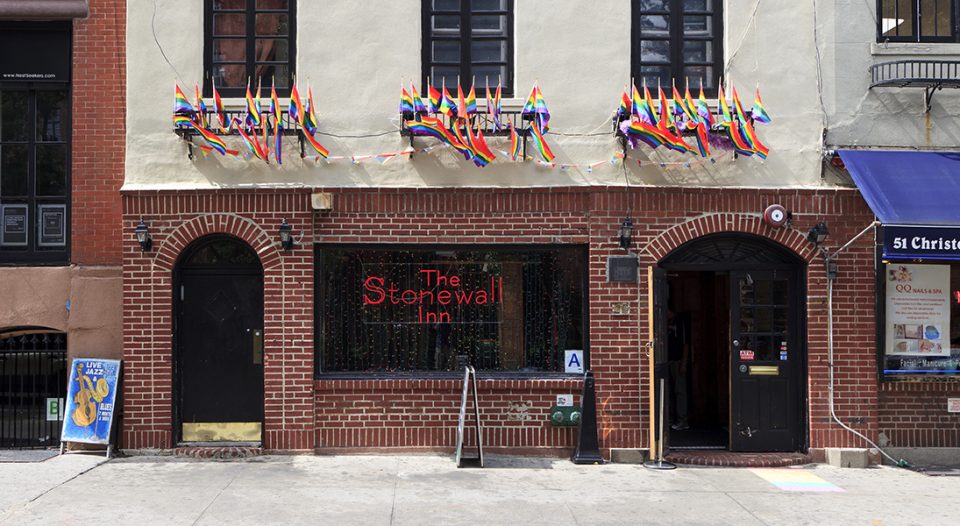 A couple years ago, I held my 40th birthday party at the Stonewall Inn in New York City. The same Stonewall Inn where, 50 years ago, a three-day uprising led by transgender women, drag queens and queer people of color launched what is credited to be the modern LGBTQ movement. The Stonewall is still a functioning bar, with a pool table on the first floor and a stage for performances on the second. That’s where I had my party.

One block away from Stonewall is Julius’, a lesser-known historic watering hole. Three years before the Stonewall riots, the Mattachine Society held a “sip-in” to challenge the prohibition on serving alcohol to LGBTQ people. Activists, pretty much all white men wearing suits and ties and followed by reporters and photographers from the local papers, entered Julius’ and said, “I’m a homosexual, and I’d like a drink.” The iconic photo from that day shows the bartender holding his hand over the glass to physically block alcohol from being poured into it.

As a resident of New York City and member of the LGBTQ community, I often patronize these historic sites. Today, the Stonewall Inn is a National Monument and tourist destination, while Julius’ is listed in the National Register of Historic Places. Whenever I enter either establishment, I feel like I am witnessing history—witnessing it, not living it. I wasn’t even alive when the “sip-in” or Stonewall Riots occurred.

Despite actively working for an LGBTQ advocacy organization, I sometimes feel like history is happening just before I came along.

I’ve felt the same way about the Lutheran LGBTQ movement. In 1990, Jeff Johnson, Phyllis Zillhart and Ruth Frost were ordained in the newly formed Evangelical Lutheran Church in America—and pretty immediately put on trial. The pastors were defrocked, and the congregations that called them were expelled. This moment set in motion a decadeslong movement to change the ELCA’s policy regarding ordination.

While all this Lutheran history was taking place, I was a middle school kid, closeted, dealing with bullying and finding acceptance from my childhood pastor, one of the few people to whom I came out. I knew nothing of what is considered such a monumental moment in the life of the ELCA.

Did they know they were creating a historic moment? Or were they unaware that their story would be told and retold?

Later, when I started working in the Lutheran LGBTQ movement, I learned of their story, and even met all three of the pastors. And when, in 2009, the ELCA changed its policy to allow clergy and rostered leaders in same-gender relationships, I was there, in the Minneapolis Convention Center.

And yet, I still felt left out because I wasn’t there for the beginning of the story. These victories weren’t for me, but perhaps for those who had come before me.

I wonder if that’s how these three pastors felt when they were ordained and endured a church trial? Did they know they were creating a historic moment? Or were they unaware that their story would be told and retold? Were they comparing themselves to the pastors and leaders who had been quietly dismissed for years before they came along?

Did the Mattachine Society know that its photo would hang on the wall at Julius’ Bar over 50 years later? That Julius’ Bar would be the setting for films and television stories that tell the story of LGBTQ history, from Love Is Strange, to Pose to Can You Ever Forgive Me? Or were they comparing their actions to previous actions, staged by smaller organizations up against an even harsher society?

Did the rioters at Stonewall imagine that generations of LGBTQ people would continue to gather in times of celebration and times of peril for the LGBTQ community? Did they know they were living history, or were they simply trying to survive yet another instance of police and society harassment? Or did they think what they were doing was nothing compared to what gender nonconforming, queer people of color had faced in the generations before them?

We call this an LGBTQ “movement” and that image is apt. None of us are ever there at “the beginning” of the movement, since the beginning is when God spoke the heavens and earth into being. We only enter this movement because of Christ’s redemption. Empowered by the Spirit, we move this movement along with our words and our actions, and eventually we pass it along to the next generation. They will be given the gift of our advances, and encounter new challenges that we didn’t have to face.

Historians will examine what sort of history we are living. But God is working in the world, using us to make history, right now.

Ross Murray
Ross Murray is an ELCA deacon, the senior director of education and training at the GLAAD Media Institute and a founder and director of The Naming Project, a faith-based camp for LGBTQ youth and their allies.

Faith on the stage