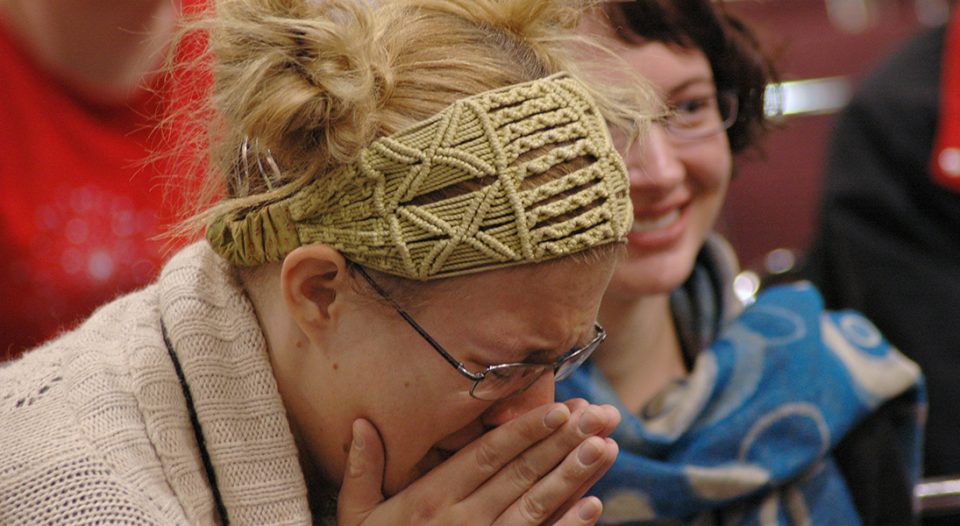 Many at the 2009 ELCA Churchwide Assembly responded emotionally to its vote removing barriers to ordination for people in same-gender committed relationships.

Editor’s note: This month marks the 10th anniversary of the 2009 ELCA Churchwide Assembly’s vote to remove barriers to ordination for people in same-gender marriages. Here, Emmy Kegler reflects on her experience leading up to and following the church’s decision.

The numbers scrolled onto my computer screen: 559 votes to 451. I wept. For the first time since I’d become a Lutheran (at St. Olaf College in Northfield, Minn.) four years earlier, I felt hope for my call to ministry in the church that had claimed me as its own. The path to my candidacy and ordination would no longer be a series of hoop-jumps, hurdles and deliberate omissions—the door was finally open.

My cries of joy were drowned out by a screeching sound in my laptop speakers. Some attendees of the 2009 ELCA Churchwide Assembly had abruptly, forcefully and loudly shoved their chairs back as they left the room following the vote, unable to receive what the numbers proclaimed: there would no longer be a nationally instituted denominational barrier to the candidacy and ordination of people in publicly accountable, lifelong, monogamous, same-gender relationships. (At the time, both the church and the nation didn’t recognize the use of the word “marriage” for such relationships.)

The path to 2009 wasn’t a direct one. The ELCA had debated the inclusion and function of gay and lesbian (failing, often, to address bisexual and transgender people) Lutherans since its formation in 1988. My own path to Lutheranism accompanied the denomination’s process of “Journeying Together Faithfully,” a two-part study that explored biblical and theological convictions around sexuality.

The run-up to “the 2009 vote,” as it’s often now called in our church, was fraught with disagreements and divisions in all dimensions: hermeneutical, pastoral, practical, procedural. The phrase “bound conscience”—used to describe the intentional co-existence of people, congregations and rostered ministers who fundamentally disagreed on this issue—was introduced.

For many years after, I heard the decision spoken about primarily in lowered voices. “The 2009 vote” has been blamed for a 10-year decline in the ELCA’s membership and congregations (10,396 congregations in 2008 to 9,163 at the end of 2017), despite the fact that other mainline Protestant denominations are declining as fast or faster (the Presbyterian Church U.S.A., for example, has gone from 10,751 to 9,304 in the same time frame).

The run-up to the vote was fraught with disagreements and divisions in all dimensions: hermeneutical, pastoral, practical, procedural.

It’s difficult to assess the exact number of individuals and congregations who left the ELCA specifically over the vote—as well as the number who left prior to 2009 over concerns about growing full communion partnerships with lesbian- and gay-ordaining denominations like the Episcopal Church.

2009 had been, in my experience, a divisive action to be mourned. Even the majority who supported it felt the shame of having excised their Lutheran family who could not bear the burden of bound conscience.

But this perspective, in which we speak only with lament, is only one side of the story of “the vote.” The voices that accompany me more days than not are the ones who joined me in cries of joy.

In our version, the 2009 vote wasn’t a disgraceful act but a moment of pure gospel. For the 18 rostered ministers “extraordinarily” ordained prior to 2009 despite churchwide provisions against them; for those like my mentor Mary Albing, faithfully serving her congregation for six years despite being officially “dropped” from and then restored to the roster each year for being open about her lesbian relationship; for the more than 300 who today belong to Proclaim, a professional community for Lutheran ministers and ministry candidates who publicly identify as LGBTQIA+: that slim margin was an open door to us, the promise of our internal and external calls not recognized but pushed aside, not secret and shamed, but finally acknowledged—even celebrated.

The day after “the vote,” I reopened my application at Luther Seminary, St. Paul, Minn. I graduated in 2014 and was approved without reservation for ordination in the denomination I love. In 2016, I was called to serve at my first and current congregation. In 2018, I married my wife, who had at my ordination placed the red stole around my neck.

Ten years removed from that August day, I still hear the screech of the chairs. But each day, more loudly, I hear the cries that followed: the shouts and songs of God’s joyful children finally brought home to a church that could witness and consecrate their calls to serve. May we, 10 years later, tell the fullness of the story, with all the joy it can bear.