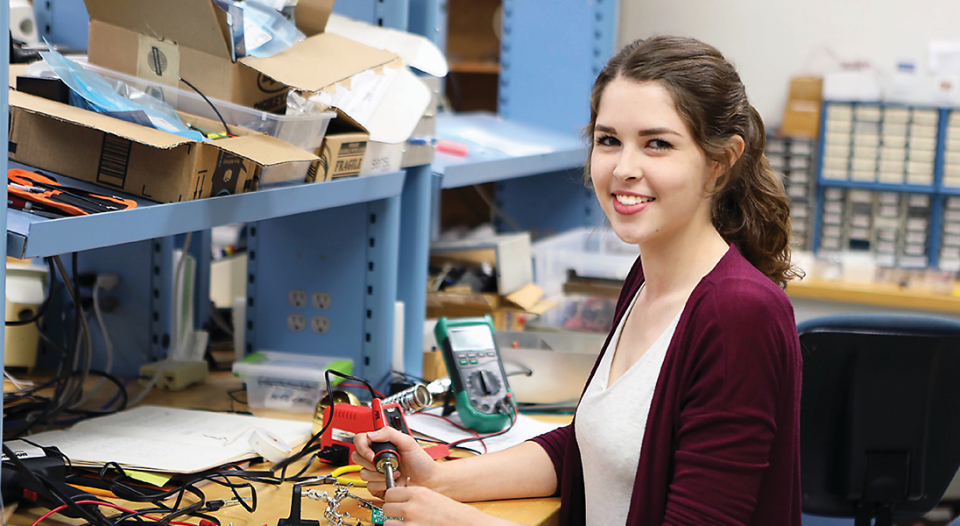 Shelby Klomp, a senior at Gustavus Adolphus College in St. Peter, Minn., was one of six students in the U.S. to receive a $10,000 Rossing Physics Scholarship for the 2019-20 academic year. The scholarship is awarded to students studying physics at any of the 26 ELCA colleges and universities.

When John Nichol was a 21-year-old physics and math major at St. Olaf College in Northfield, Minn., he received one of the first Rossing Physics Scholarships, a highly competitive award worth $10,000.

“It was an honor to receive the award, and the financial support helped make it possible for me to finish my undergraduate education and attend graduate school,” Nichol said. “To this day, I remain grateful to the Rossing family for their support because it spurred me on to pursue my vocation in physics.”

“We look for the best and brightest undergraduate students in physics programs at ELCA colleges and universities,” Nichol said. “Tom Rossing’s generous gift, which established the Rossing Fund for Physics Education Endowment, has made a positive impact on the lives of many physics students, and it is wonderful to be part of this ongoing work.”

Thomas D. Rossing, a former professor at St. Olaf, created the scholarship program in 2005 through the ELCA Foundation. The scholarship is awarded to exemplary students studying physics at any of the 26 ELCA colleges and universities. It’s designed to be used for students’ tuition to help ease the burden of pursuing a degree.

“The aim was to encourage outstanding young men and women to study physics at ELCA colleges—and to help make it possible for them to do so,” Rossing said. “Physics is the most basic of the sciences, and the study of physics opens many doors to study other subjects.”

Rossing said the scholarship program has encouraged physics students to attend ELCA schools, adding that most of the awardees with whom he has corresponded have continued their studies in physics or a related field after graduating.

“It has stimulated the study of physics among the Rossing scholars and other students at ELCA colleges by providing a critical mass within physics courses,” he said.

Rossing began his academic career as a professor at St. Olaf, where he chaired the physics department, and continued at Northern Illinois University in DeKalb. Now retired, he lives in Mountain View, Calif. At age 90, he continues to serve on the Rossing Scholarship review committee, as does his daughter, Jane Frankenberger, a member of the engineering faculty at Purdue University in West Lafayette, Ind.

Shelby Klomp is a senior at Gustavus Adolphus College in St. Peter, Minn., where she majors in physics and minors in philosophy. She was one of six students nationwide to receive a $10,000 Rossing Physics Scholarship for the 2019-20 academic year.

Klomp, of Maplewood, Minn., said she plans to pursue her doctorate and focus on researching particle and high-energy physics.

Mark Wilhelm, ELCA program director for colleges and universities and executive director of the Network of ELCA Colleges and Universities, said the natural sciences, including physics, are a key component of a sound liberal arts curriculum.

“Rossing [scholarships] have enhanced the liberal arts at ELCA colleges and universities by highlighting the quality of our physics programs and encouraging the students who major in them,” he said. “Tom Rossing’s endowment and the [scholarships] have strengthened the ELCA’s contribution to future leaders in theoretical and applied physics.

“The world needs students who—because of their education in institutions of the Network of ELCA Colleges and Universities—understand the importance of serving the neighbor in whatever they do, including physics, so that all might flourish.”

Education for vocation: A look at the Network of ELCA Colleges and Universities