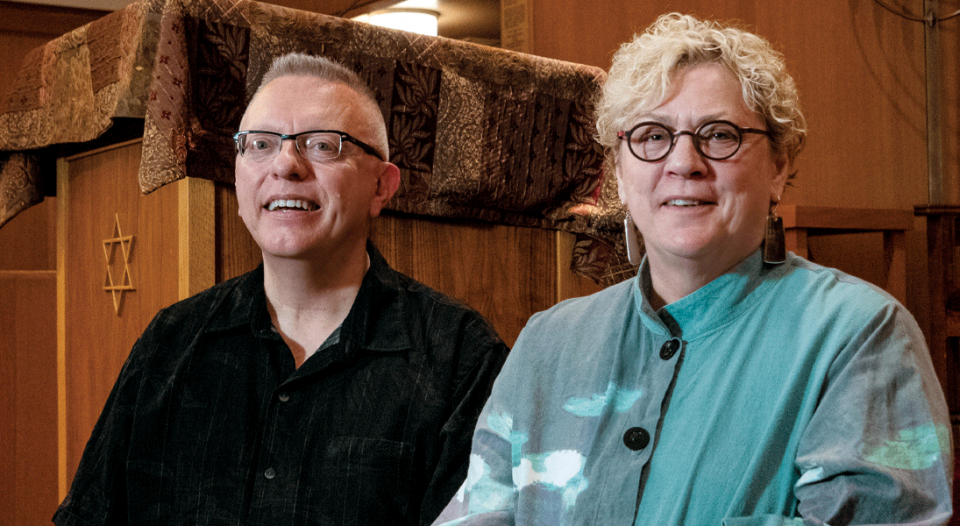 Courtesy of the Forum

For nearly six years, St. Mark Lutheran Church in Fargo, N.D., could find only temporary spaces to gather for worship. Now the congregation has found a place that could be a long-term home: Temple Beth El, a Jewish synagogue in town.

“I believe that St. Mark’s community has found a new place to worship that fits our hopes and dreams, and our commitment to inclusivity,” said their pastor, Joe Larson.

The congregation used to worship in a church near downtown Fargo that was built in 1912, but the building was sold to a developer in fall 2013.

Initially, St. Mark rented space at Elim Lutheran, which houses another ELCA congregation. Then, in spring 2017, St. Mark moved into a chapel that had once belonged to a Catholic convent. Two and a half years later, the chapel’s owner, Prairie St. John’s Hospital, decided to build a new facility on the site. Once again the congregation was on the move.

“We like to say that St. Mark’s journey has been a lot like the people of Israel who wandered in the desert for 40 years after fleeing their bondage in Egypt,” said Larson, who researched about 40 options for worship and office sites in the area.

“It really is a perfect marriage. It has invigorated our tiny community in many unexpected ways.”

Last May a parishioner suggested to Larson that they rent space at Temple Beth El. Larson had reached out to the synagogue three years earlier, but this time, he said, the synagogue board responded enthusiastically.

For Janeen Kobrinsky, rabbi of Temple Beth El, sharing space with St. Mark wasn’t a difficult decision. “Quite simply, St. Mark needed a place to worship, and we have an empty sanctuary on Sunday mornings,” she said. “We share the same ethos. We are both welcoming congregations. It really is a perfect marriage. It has invigorated our tiny community in many unexpected ways.”

Mary Jane Haugen, a member of St. Mark’s congregation council, said, “It feels to me that we’re still rolling around in what a joy it is to be both settled and there [at Temple Beth El]. It is beyond what we hoped for.”

Because the two congregations worship on different days of the week, sharing space could focus primarily on the building, said Elna Solvang, a member of St. Mark. “But Temple Beth El opened wide its doors, welcoming the people and the ministry of St. Mark to live in the space with them,” she said. “The fruits of this relationship include a deepening understanding of the distinctiveness of each community, our kinship in faith and our common commitment to the healing of the world.”

Both congregations have a history of affirming LGBTQ+ rights. St. Mark members voted in 1991 to become a Reconciling in Christ congregation, declaring themselves welcoming to all people regardless of sexual orientation or gender identity. In 2016 they called Larson, who said he’s the first openly LGBTQ+ pastor called by an ELCA congregation in North Dakota.

St. Mark parishioners have attended Temple Beth El’s Saturday morning services, and the temple said they could erect a sign on the building’s front lawn.

Temple Beth El has been the only Reform Judaism congregation in Fargo for the past 70 years, and the synagogue endorses a variety of LGBTQ+ issues, such as including LGBTQ+ individuals in the rabbinate and cantorate.

The congregations’ mutual cooperation has deepened into a sense of community. St. Mark parishioners have attended Temple Beth El’s Saturday morning Shabbat services, held twice per month, and a liaison committee with members from both congregations meets to discuss their partnership. Temple Beth El even said St. Mark members could erect a permanent sign for their congregation on the building’s front lawn.

St. Mark has brought a variety of community projects to Temple Beth El, such as art shows, a mosaic project with the homeless-relief organization Churches United and food drives for the city’s pantry. It recently helped coordinate an international potluck at the synagogue.

For 25 years, synagogue members had hosted a spring brunch fundraiser, but their decreasing membership forced them to cancel the event. Now, with St. Mark as a partner, Temple Beth El has decided to hold a Taste of Jewish Tradition event on April 26.

“We see the Spirit of God moving among us,” Larson said. It became obvious early on, he added, that he and Kobrinsky share a similar vision of what a faith community is meant to be.

“To share space with Temple Beth El shows our support for the Jewish community in ways that would not happen otherwise,” he said. “And it is not just about sharing space—we are working together on shared values. People in our community have told me how inspiring it is to them to have this happen here.”