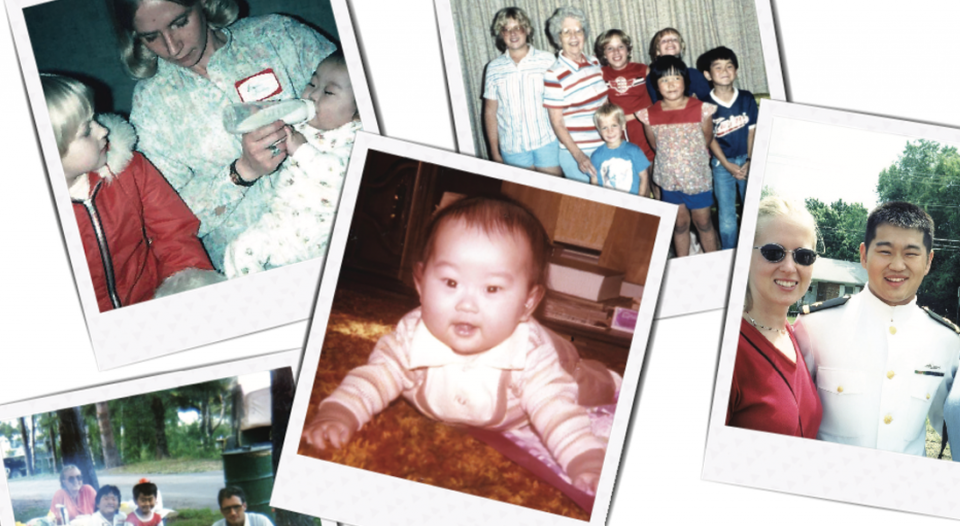 The author throughout the years with his adoptive family.

In 2017, the New York Times published a story highlighting the struggles of Korean American adoptees who were recently deported back to Korea after living in the United States. Before 2000, parents had to apply for citizenship on behalf of their adopted children, but many failed to do so, not realizing it was necessary. Now, without legal citizenship, a number of adoptees were forced back to Korea to live as native citizens. They struggled to do so, and one adoptee profiled ultimately died by suicide.

The Minnesota Historical Society estimates that 120,000 Korean children have been adopted by transracial parents since the end of the Korean War. Minnesota has the highest concentration of Korean adoptees by state due to a variety of factors but mainly through Lutheran Social Service of Minnesota’s prominent Korean adoption program, which started in 1969 and continues today.

A tension emerges when adoptees attempt to claim one identity outright. Claiming an Asian heritage and history can feel ingenuine. Experiencing Asian racial discrimination can remind them that they are not “white.”

What has kept me from rejecting the adoptive family who loves me? What has helped me deal with the instances of racism that often confuse and surprise, rather than offend, me?

Professor John Palmer describes this tension as a “dance of identities.” In his book, The Dance of Identities: Korean Adoptees and Their Journey Toward Empowerment (University of Hawaii Press, 2010), Palmer’s research shows that for some adoptees, this tension caused no issues. But for others it led to a sense of extreme betrayal toward their adoptive parents, resulting in depression and even suicide in extreme cases.

For most transracial adoptees, this tension can be described as an unresolved awkwardness or “not fitting anywhere.” As a transracial Korean adoptee myself, I can attest to that.

I was adopted as an infant in the late 1970s by parents of Swedish ancestry. I grew up on a small, family-run dairy farm in central Minnesota. My upbringing was not unlike that of any other kid growing up in the area at the time—I played multiple sports in high school, did farm chores and was involved in our small ELCA congregation, about a half-mile from our farm.

It isn’t too far-fetched to conclude that many transracial Asian adoptees grew up in ELCA congregations and, as adults, continue to be active as laypeople and rostered ministers. But as the ELCA wrestles with how to be more inclusive—including in the full partnership and participation of Asians and Pacific Islanders—it inadvertently overlooks transracial Asian adoptees.

The reasons are simple: because of this dance of identities, others may not truly see us as authentically Asian, or it’s assumed that we identify with our ethnic heritage and history.

I am defined by being Korean. I am also defined by my Minnesota roots. God has given me the freedom to choose.

This identity, bestowed to me in baptism, is a source of strength and grounds me.

While I don’t speak for every transracial Asian adoptee, I’ve often wondered how I have been able to live the “dance of identities” throughout my life. What has kept me from rejecting the adoptive family who loves me? What has helped me deal with the instances of racism that often confuse and surprise, rather than offend, me?

What I have learned is that there’s a third identity that defines me: child of God.

This identity, bestowed to me in baptism, is a source of strength and grounds me. I don’t have to resolve the tension between my identities, and I can claim both fully, even when external voices try to impose a particular identity on me.

I am defined by being Korean. I am also defined by my Minnesota roots. God has given me the freedom to choose. However, I am ultimately defined by my relationship with the God who claimed me—all of me.

As we celebrate Asian Pacific American Heritage Month in May, let the story of transracial Asian adoptees remind us that it is not a particular culture or ethnicity alone we celebrate, nor is our aim to celebrate only diversity itself. Rather, it is to celebrate the good news of a God who embraces us as God’s children—in all our distinct expressions, and beyond them as well.