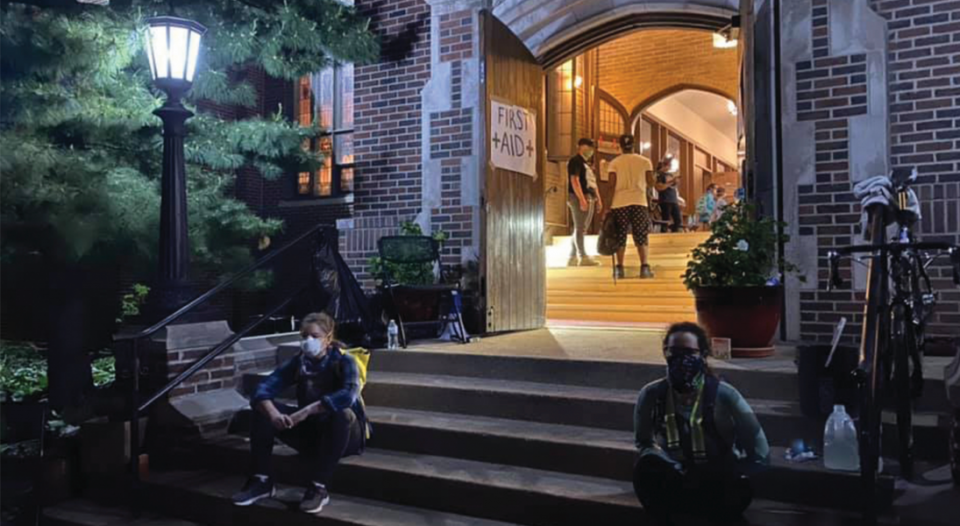 We kept the doors of Holy Trinity propped open all night. In our fellowship room, medics tended those wounded during the protests. Soon the impromptu clinic spilled onto our front lawn. I stood in the foyer, welcoming people. Repeatedly, I heard reports of fires less than a block away.

I walked a few yards toward the 3rd Police Precinct. Immediately, I felt the heat and my lungs began to fill with smoke. Our church neighborhood was nearly unrecognizable. The fires on Lake Street mirrored the generational pain that many in the Black community have carried from years of racial discrimination.

The fires that were raging outside were also raging inside me. As I returned to my church, the only prayer I could find in my spirit was that of the psalmist: “How long, O, Lord?”

Later, I grappled with what to tell my precious children, aged 13, 9 and 8, when they asked, “Mommy, is the whole world on fire?”

I wrestled with the question on my mind: “Are we next?”

What happened to Floyd—and countless other Black Americans—should touch all human beings, especially those of faith.

I’d seen all eight minutes and 46 seconds of the video of George Floyd’s killing. As I watched the police officer press his knee into Floyd’s neck, I wept bitterly. I tried to cry quietly so my children wouldn’t witness their mother in such deep pain. But when George groaned, “Mama, Mama … I can’t breathe,” like the psalmist, “I [cried] aloud …. My soul refuse[d] to be comforted” (Psalm 77).

I went upstairs to cry on my husband Benhi’s shoulder. I lay next to him, sobbing, “They killed that man. They killed him!”

By then, our other two children had gathered by the bedroom door with equal parts confusion and fear. “How?” they asked. “In a car accident?”

“Mom, were we related to Mr. George?” Khenna, our 9-year-old, wondered.

“No,” I replied, thinking of what to say next. Benhi interrupted, “Yes, we are related because he’s human.”

Benhi is right. Jesus prayed that we would be one. When one member suffers, the whole body feels pain. What happened to Floyd—and countless other Black Americans—should touch all human beings, especially those of faith.

We need the Spirit to blow through our nation as a mighty rushing wind, purging it of systemic racism and white supremacy. This is the work of the church. We are called to demand anti-racist policies and work toward reparations.

Who could have known that we would have experienced the multilayered trauma that has visited us these past weeks and months? There is a fire in my bones, yet I struggle to hold on to hope.

I find encouragement in Paul’s words to the Romans, and I am convinced that nothing is more powerful than God’s love. Not death, life, angels, rulers, not COVID-19, systemic racism or even a knee on our neck can separate us from the love of God, poured out for all humanity through Jesus Christ.