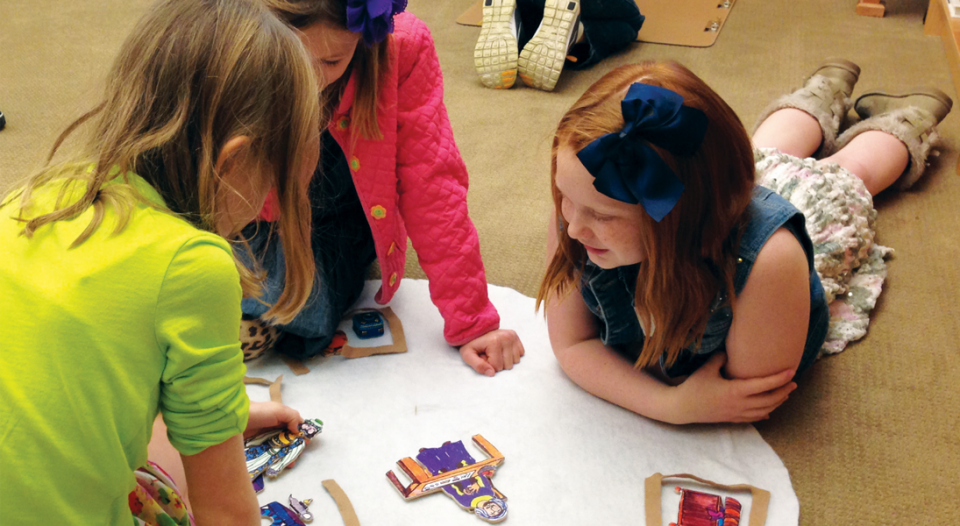 Godly Play uses Jesus’ parables to engage children in deep wondering. For the parable of the great pearl, the storyteller asks, “I wonder if the merchant missed his bed after he sold everything for the great pearl.”

Last fall, a preschooler named Thomas, in line at the grocery store with his mom, struck up a conversation with the woman behind them.

“Do you know a man named Noah?” he asked her.

“She was a bit confused at first,” said his mother, Jennifer Hoemberg, “but Thomas continued with great gusto to explain that ‘God called on a man named Noah to build a giant boat. It is called an ark! And all the animals came. And there were two of every kind! And that man, Noah, his boat saved them! Boy, am I glad Noah listened to God!’”

By the time they checked out, Thomas and the woman were praying together.

Thomas attends Holy Comforter Lutheran School in Kingwood, Texas, where he has learned about the Bible through Godly Play. This method uses a Christian formation curriculum that helps children explore their faith through story, gain religious language and enhance their spiritual experience through wonder and play.

“You invite kids to have an experience of God, rather than telling them about God,” said Janelle Hooper, ELCA program director for children’s ministry, who introduces Godly Play to leaders across the country. “It invites curiosity and wonder.”

“We do not assume children are a blank slate, empty vessels into which we need to pour information,” said Karin Liebster, a pastor of Christ the King Lutheran Church in Houston, which has been using Godly Play since 2002 with preschoolers through sixth-graders.

Immersing children in the story

In traditional Sunday school, a story about the Israelites’ exodus from Egypt might include reading a book, then a related craft and coloring page. With Godly Play, a trained storyteller sits on the floor in a circle with the children, using small wooden figures on a surface of sand.

The storyteller, slowly and deliberately, engages the children by moving a hand across the sand, describing the wind, heat and cold of the desert, and how hard it is to exist there. The storyteller then moves the wooden people around in the sand while telling the story, rolls out a fabric sea that “parts” for them to cross and ends the story with questions such as “I wonder what part of the story you liked best? I wonder what part is most important? I wonder who you might be in the story?”

After the story, children have time to do whatever they want: they may create something out of clay or paint, play with the props or take a box with another story from the shelf to play with.

Godly Play immerses children in the story and helps them experience it with their senses, their curiosity and their spirituality.

“The children really like to be there,” Liebster said. “They participate beautifully.” Sometimes the depth of their responses to the wondering questions and the things they create after the story floor her, she added.

The way the stories are presented and the wondering questions get them to think about big questions of life, Liebster said, without the storyteller coming out and asking them directly. Things such as who they are, finding meaning in life and the fact that things end.

Colleen Engel, director of early childhood education for Holy Comforter, uses Godly Play weekly with students, who range from 2 to 5 years. “It’s really easy for kids to understand,” she said.

Holy Comforter has a dedicated Godly Play room and uses the story as the basis for its weekly chapel service. Godly Play stories are designed for use with the church calendar and repeated each year. As the stories are repeated, children’s understanding is reinforced and broadened, and supplemented with related stories.

At home, Thomas often retells the stories and asks about what he’s learned and other big questions, such as who goes to heaven and what it’s like there.

“It has absolutely changed the way we do religion at our school and the way the kids relate to it,” Engel said.
Hoemberg said Thomas grasps the events, people and places he’s learned about at school. At home, he often retells the stories and asks about what he’s learned and other big questions, such as who goes to heaven and what it’s like there. “The effect of Godly Play in our household has been tremendous,” she said.

While it could be daunting to get started with Godly Play materials, training and dedicated space, Hooper said acquiring supplies could be done gradually, with borrowed or homemade materials. And storytellers don’t need theological backgrounds—just the willingness and ability to memorize and tell a story and ask the questions.

Godly Play started primarily in the Episcopal Church, but it has grown and spread to many other denominations. It has been used at camps, such as Lutherhill Ministries in Texas, where staff have used wooden figures they made themselves; at vacation Bible schools; on retreats; and with sick children in hospitals. Hooper said it’s even been used at a funeral.

Whatever the setting, “it invites them to experience the sacred, to be a part of it,” she said. “The impact is, it creates a lifelong learner, someone excited to experience God.”

Lori Haugen
Haugen is a writer, editor and librarian. She and her family are members of Grace Lutheran Church, Fairmont, Minn.

The ministry of storytelling