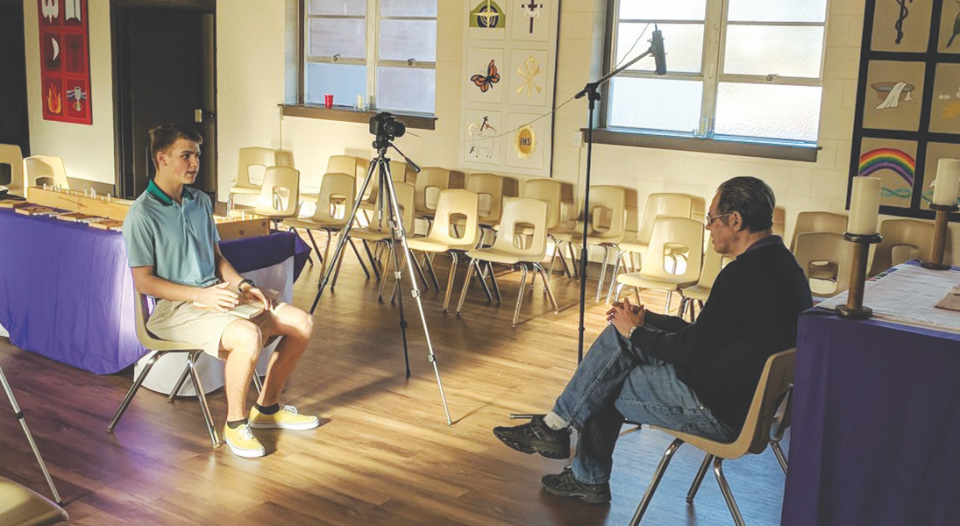 One Sunday in 2017, Alex Hoffner, pastor of Trinity Lutheran Church in Tullahoma, Tenn., pulled aside then-15-year-old Colin Shuran after a worship service with a suggestion for a potential movie subject. Hoffner—and the congregation—had been supportive of Shuran’s increasingly serious filmmaking aspirations, even appearing in one of his short films.

“He was like, ‘There’s this new member who was actually a member here 20 years ago,’” Shuran recalled Hoffner saying. “‘You should try to do a documentary on him. I think he has a really interesting story.’”

The returning member was Karl Smithson, a figure of some renown in Tennessee for his longtime advocacy on behalf of those experiencing homelessness, including having run for mayor of Nashville in 1991 while he was homeless himself. “By running, I put a face on homeless people,” he said. (He would also run for governor in 1998.) Smithson had recently relocated to his hometown of Tullahoma and his former congregation.

Shuran reached out to Smithson and the two began meeting after church. “As I started having these conversations with Karl, Pastor Alex really encouraged me to keep moving forward with this project,” he said. “That’s basically how it started—[it] was just, ‘Hey, you need to tell this story.’ And we’re here now.”

“It started evolving into a friendship, where me and Karl would talk every Sunday.”

This year, Shuran, now 17, debuted his feature documentary My Friend Karl, which examines Smithson’s life as well as the friendship that grew between the two through making the film. It has been selected for multiple film festivals this year and won a Remi Award at the WorldFest-Houston International Film Festival.

“The final product is completely different than what I thought it was going to be,” said Shuran of My Friend Karl. “I thought I was just going to tell a story about Karl’s life, homelessness, mental illness and touch on those issues.

“But then it started evolving into a friendship, where me and Karl would talk every Sunday—about sports, about the Bible, about different things that interest us. And midway through the project, I was like, ‘Well, this makes sense, because throughout all of Karl’s story, one major theme is friendship, and now I have a friendship in Karl.’”

Growing up, Shuran carried an iPad around the house, filming various scenes and editing them together. As he got older, he realized he could tell narrative stories with videos. “It started as a hobby and now it’s turned into a passion,” he said.

An active Trinity member, Shuran appreciated the ways the congregation emboldened his passion. “Church gave him a space and a place to explore his gifts,” Hoffner said. “Church is a place to discover who and whose we are.”

One way Shuran did so was through the church’s youth ministry. “A lot of his focus on advocacy and justice and awareness has really been brought through our youth ministry program,” Hoffner said.

Shuran agreed, citing in particular his experience at the 2018 ELCA Youth Gathering and doing volunteer service in Houston during the event. “I credit the Youth Gathering for making my faith stronger, because I don’t think, if I hadn’t experienced that, that the message in this film would be as powerful,” he said.

Of the relationship that developed between Smithson and Shuran, Hoffner said, “I think it just shows the diversity and the friendships that can happen at church—the partnership and collaboration that are possible at church.”

For his part, Smithson was excited at the prospect of being the subject of a documentary. “I go around telling people that most of my life, I’ve been an unemployed, impoverished, mentally ill, disabled, sometimes homeless person. So, for somebody like that to have a movie made about them is pretty extraordinary,” he said, laughing.

“Listening is the key to it. Colin did a good job of listening to me.”

My Friend Karl is narrated by Shuran with an affable tone but doesn’t shy away from exploring difficult issues. It highlights the advocacy efforts Smithson has made, including seeking to expand homeless services in Nashville and successfully working to allow libraries to check books out to those without a permanent address and to have churches offer use of restrooms to homeless guests at free meals.

Shuran had planned to premiere the film in the spring, but COVID-19 complicated its launch. Eventually, a public, physically distanced premiere was held at an outdoor screening in Tullahoma, with around 250 people attending.

At the premiere, Tullahoma Mayor Lane Curlee announced that the date, June 19, was Karl Smithson Day, which Shuran had encouraged him to declare.

“It’s stuff like that, not just awards, that make me feel good,” Shuran said. “The best thing about it is the community coming together to watch this film.”

My Friend Karl viewers often ask Shuran what they can do to get involved in homelessness advocacy. “I usually tell people something Karl told me, because I asked him the same thing. He said, ‘Just sit down and listen.’ That’s all people want,” Shuran said. “They want somebody to listen to them, they want somebody to hear their problems. And that’s generally where solution starts and that’s where friendship starts.”

Smithson agreed: “Listening is the key to it. Colin did a good job of listening to me. That’s the most important thing you can do for a person like me that nobody usually has time for. So that was a very empowering experience.”

My Friend Karl is available to stream on Amazon Prime Video. Learn more at colinshuran.com.

A bridge-builder in a polarized time